There are two things I know about spaghetti westerns, and one is that they don’t feature any actual spaghetti. The second thing, which is significantly less embarrassing to admit, is that the theme itself, with its rich history and fancy saloon talk, is wholly underutilized in video games. It’s strange, too, because the west makes for an interesting backdrop. Take Red Dead Redemption for example; prior to that experience, my interest in the west and its gun slinging craziness was limited by my knowledge of the genre which, unfortunately, was drawn from various cheesy films I was force-fed as a child.

But like my journey with John Marston taught me that loose morals aren’t always exclusive to criminals, Secret Ponchos, the top-down, western themed, dual-stick shooter from Switchblade Monkeys — possibly the greatest company name ever — taught me that a little competition can be a lot of fun.

During PAX East this year, I was introduced to a genre I’ve long avoided: the dual-stick shooter — mostly due to an enormously humiliating lack of skill and dexterity. Armed with little more than a brief description and hundreds of observers to gaze at my shame, I was handed the gun — I mean, controller — and asked to select a character. Immediately, I recognized a handful of game modes, including a capture the flag and team death match. Those weren’t on the table, however. Switchblade Monkeys had something else up their sleeve: a free mode, pinning all players against one another in a large ghost town. How fun, I thought. 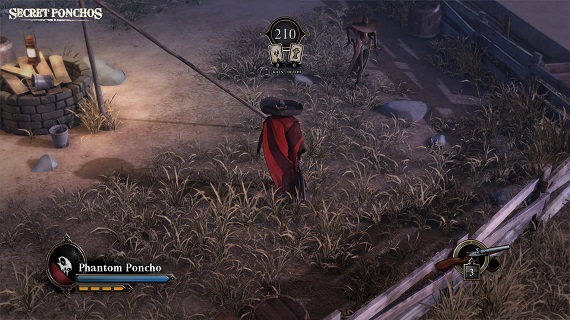 Before jumping into a match with the show floor strangers, I was presented a character selection screen. Thankfully, Secret Ponchos doesn’t skimp on variety, and five characters grace the roster, with more to come post launch. Each character has a different set of weapons and skills, ranging from speed to range, and will require the mastering of a slightly different playstyle. While my interest was piqued at the sight of a burly, beefhouse-type, I was informed that Kid Red, a slender, speedy, pistol toting bandit was the easiest class for a newcomer to handle. An obvious choice for me.

Characters aren’t just a pick-and-go in Secret Ponchos, either. There’s minor customization, and you’ll have ample opportunity to upgrade characters as you play. It’s not an end-all system, though. While you can improve skills, those upgrades will rarely lend a major advantage versus your on-screen competitors. Rather, they’ll improve on what you’ve already managed to learn, making your personal talents a tad more noticeable. Although the most important choice is the first you’ll make: which character suits you best? Kid Red, for example, dual wields pistols with a generous range. His secondary attack, dynamite tossing, allows for widespread damage and some creative escape maneuvers. 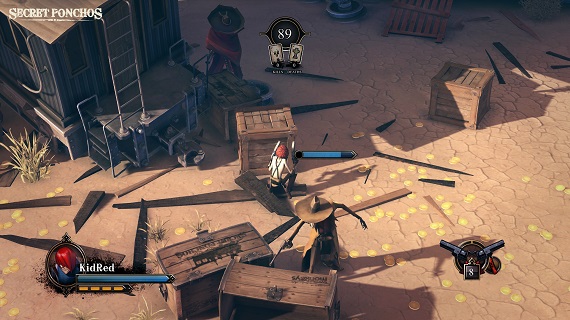 Running around the map was, for lack of a better word, smooth. Character animations flowed beautifully, even during hectic encounters, and everything from the abandoned saloons to the dusty wheels littering the environment were stunning. After a few “adjustment deaths,” I was rolling in and out of range, firing at players as I found them. While there’s no formal in-game map, icons appear across the corners of the screen, indicating enemy locations. Naturally, stamina — which controls your dodge — is limited, but it was rarely an issue. The controls, too, are as responsive as can be. There’s a learning curve, but only because Secret Ponchos is a staircase above similar titles.

It wasn’t long before I was dashing across the map, dodging, reloading and shooting accordingly. I found it immensely satisfying to evade a wave of death as I slid behind an enemy, spraying bullets at his backside as my dynamite exploded another. I won’t lie, I died a lot. For every kill I managed, I was waiting for half a dozen respawns. The fun, though, never dwindled, and I was always eager to find my killer and get my revenge.

Eventually, I found the key was to study the abilities of the competing classes, and exploit them at opportune moments. For example, some classes are slow but incredibly powerful. Running in like a maniac is a death sentence for all but the dual-stick pros, so dodging and tossing a dynamite, or confusing with a barrage of rolls and stabbing are more viable options. There’s not too much complexity in Secret Poncho’s system, but what little there is helps increase the potential “controlled mayhem” by tenfold. 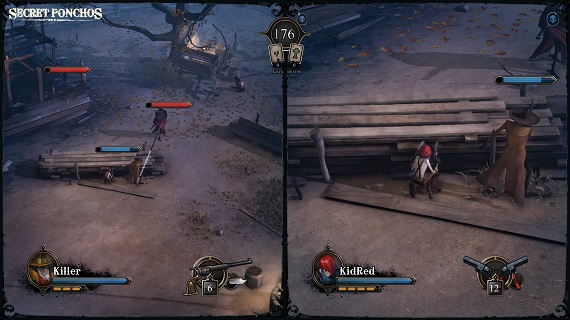 After all, Secret Ponchos is a competitive online shooter. If those words don’t bubble your adrenaline, tense your fingers and entice your gamer soul, you’ll likely be sticking with the single-payer experiences littering the market. If, however, you’re tickled pink by shooting strangers — and friends — in a plethora of fast-paced matches, and doing so at a buttery 60fps (even with 8 players split across 3 TV’s at a massive event like PAX), Secret Ponchos is a winner. It’s a western themed, absurdly fun, gorgeously detailed winner.

Secret Ponchos boasts a dark, superbly crafted western theme that’s as gorgeous as it is fun to explore. Running across levels, whether swooping through a storm of bullets or rolling in and out of abandoned buildings, is incredibly enjoyable. The final release will feature 2 player local games, as well as online support for up to 8 characters, with a much appreciated split-screen option. It’ll be available on the PlayStation 4 as well as Windows, so both console and PC owners should be delighted. Secret Ponchos is due this Fall, and will be available for free to PS Plus members.