The post-apocalyptic wasteland is no place for the weak, and if you want to survive it’s going to take more than just a big gun and bad attitude. If you really want to compete for the big prize it’s going to take mutant abilities, thousands of bullets, a flexible attitude that can adapt to new weapons and abilities as they become available, and a whole lot of explosions. The Nuclear Throne is waiting, and you’re going to need to blast your mutant-freak way through a brutal host of enemies to claim it.

Nuclear Throne has been kicking around Steam Early Access for several months now, growing in size and features all the while with regular, near-weekly updates. The PAX East update even added 2-player local co-op, which was a big hit at the Vlambeer booth as people were able to be slaughtered by the enemy hordes together in a viciously unforgiving bonding experience. 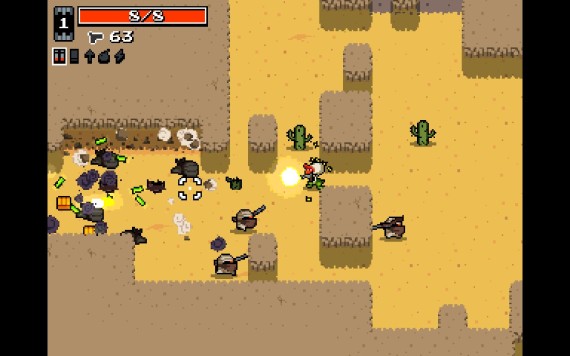 At its very basis, Nuclear Throne is a twin-stick shooter set in a desert wasteland overrun with mutants and other beasties, which should make whichever of the seven mutant characters you pick feel right at home. Each character has two unique abilities, one passive and one active, and success requires using them to their full extent. Plant’s extra speed is great for fast-paced action, and he can shoot vines to slow down any enemies who get tangled in them. Robot, on the other hand, can eat the extra guns the other characters would leave behind, randomly earning extra bullets or health, and its passive ability earns it better equipment drops. One character takes less damage while another dual-wields, and the abilities need to be exploited properly if you want even the slightest hope of sitting on the throne.

If it’s not obvious, that’s because Nuclear Throne’s wasteland not only wants you dead but is very good at achieving its goal. Each level is crawling with mutant nasties that range in abilities from “worryingly effective” to “run away if you want to live”. Not that running is an option, due to the levels requiring the extermination of everything that lives in order to be completed, but a cautious approach mixed with good dodging amidst a swarm of bullets is going to see far more success than going full Rambo. Most characters start with a mere 8HP, and not only can they be depleted surprisingly quickly but health packs are scarce and only restore 2HP apiece. Once health dips below full it’s rare to see it topped off again. Bandits swarm the badlands throwing just enough bullets to be a problem, giant maggots spawn mini-maggots when killed, and giant scorpions throw out fans of projectiles. That’s just the first set of levels, and things only get more hectic from there. By the time you get to the scrapyard you’ll not only be dealing with tons of enemies, fire turrets, and exploding scenery but you’ll also have leveled up enough to attract the attention of the IDPD. Because obviously there wasn’t enough going on to keep a homicidal mutant occupied. 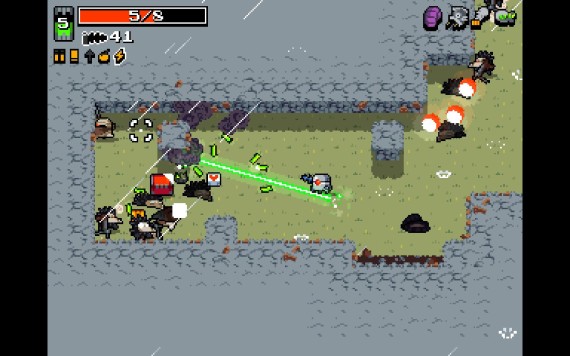 Fortunately you’ll probably be pretty powerful by then. Leveling up grants a new ability, selected from a random group of four, and there are plenty of more powerful guns to find along the way. Machine guns, shotguns, explosives, lasers, crossbows, and melee weapons are all available to find, but you can only equip two at once so choose wisely. Seeing as some of the level-up abilities tie into a specific weapon type (more powerful energy blasts, regular bullets recycle themselves when they hit an enemy, etc.) you’ll want to specialize in each run, but a flexible approach to armed mayhem will serve better than blind adherence to a specific tactic. That high-powered plasma gun doesn’t do a lot of good if it runs out of ammo, after all.

Even with proper care and planning death is fairly likely, but a quick tap of a button starts over with the same character for another attempt. It makes for a game where one round flows into another with no time to do anything but moan a bit about the unfairness of it all. The randomized layouts and powerups perform their usual magic of making each game its own unique challenge, and it’s far too easy to go from one attempt to another. Die, start over, die, start over, do better, die again, swear lots. This is normally the section of the article where I’d say “Steam Early Access, features and updates coming, still crashes a bit, caveat emptor” and all that, but honestly there’s enough content there and it’s a ton of fun to play through, so the emptor doesn’t have to do a whole lot of caveat-ing.  Nuclear Throne is a brutal, challenging blast to play through, and it’s only going to get moreso before it’s done.