Before visiting the Last Limb booth at PAX East, I wouldn’t have imagined that fruit and vegetables could stand their own against various meats and cheeses. If that sentence is confusing, it’s because you haven’t heard about Organic Panic — a physics-based platformer with an emphasis on puzzle solving. The mechanics combine Worms and a dash of platforming magic, albeit without the pinpoint accuracy demanded by titles like Super Meat Boy.

Your edible brigade consists of Carrot, Cherry, Kiwi and Coconut, each of which commands a different element. Carrot, for instance, controls fire. Once you’ve collected enough power balls, you’ll be able to burn enemies to a crisp, or slice through terrain like a kamikaze flamethrower. Kiwi, on the other hand, handles water, allowing you to strategically douse Carrots’ flames, create pools of liquid, and even turn into a moving puddle like a nutritious Alex Mack. Cherry is the dirt fruit, capable of manipulating terrain or simply cutting through it with elemental forces, while Coconut uses gravity to shift the surroundings — and fly, because why not.

While the characters are adorable, and emanate a certain Saturday morning cartoon vibe, don’t go in expecting proselytizing pablum. These are no VeggieTales, nor are they as wholesome as they appear. These nourishing parts-of-a-complete-breakfast are armed with powers capable of burning, drowning and slicing their problems. And that’s something you’ll do plenty of, especially in later stages. As you progress and unlock additional characters, you’ll be able to switch between them on the fly, too. So while a lecture on Leviticus isn’t on the table, there’s plenty of room to learn — how to murder things while you traverse a level by destroying bits and pieces of it. 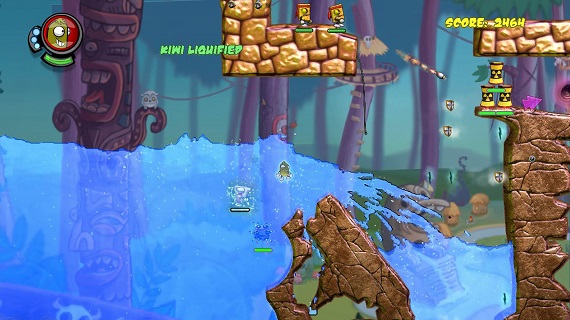 Organic Panic could easily be miscategorized upon first inspection. You’ll spend a majority of the game rushing through levels, both dodging and exploiting obstacles. To the naked eye, Organic Panic is no different than any other pretty polished platformer, but don’t let the flashy aesthetics fool you. Everything changes once the less subtle aspects of the physics engine come into play. Since everything is destructible, and everything also behaves like its out-of-game equivalent, it’s entirely possible to burn through the entire level with Carrot’s powers, knock off the platforms necessary for traversal and break the level by making completion unfeasible. Likewise, it’s possible to cleverly discover new ways in which to reach your destination or abolish an enemy.

One particular level, an earlier Coconut introductory level, leaves us with the option to either jump and face the enemy head-on, pull the enemy into the nearby abyss, or shift a slice of loose ground to crush the enemy with. There’s no tutorial or explanation at the beginning of the level, just a series of obstacles, a goal and the Coconuts gravity powers. These moments, while certainly the highlight of Organic Panic, are also plentiful. There’s rarely an instance outside of the first few stages that feels restrictive. As such, replaying levels is something that’s encouraged by the freedom to work through them as you see fit.

Later levels have a stronger emphasis on puzzle solving and, possibly due to my lack of skill, become impossibly difficult. Fortunately, I wasn’t alone. Organic Panic also features a co-op mode which, without an ounce of exaggeration, is the most fun I had while at PAX East. Paired with a representative (and then with a random observer), we tackled everything from spinning saw blades to blazing terrain, demanding teamwork as we climbed a hill; one of us splashing the fiery floor clean of its death, while the other ensured our movement wasn’t halted. There’s a delightful dynamic to the multiplayer experience, and as with the story mode, it’s possible to creatively design a path through levels and, in most cases, it’s even encouraged with simultaneous powers at play. Last Limb didn’t want to be soft on the co-op end, though. One person can’t be the “I did everything guy,” as co-op stages require helping eachother to succeed. 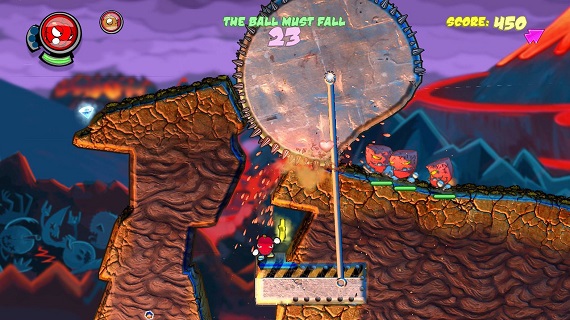 Most exciting, perhaps, is the games Level Editor mode. We were told that all the games’ stages, including the bits with beautifully spinning gears, cleverly positioned foes and open-ended designs, were all built with the in-game Level Editor. In turn, it’s possible to design impressive, functioning levels. There are dozens of options available, too, including an internal switch system. In this sense, Organic Panic is a lot like Little Big Planet, in that anything your heart desires to see can be created. If you’re more of a player, though, you can simply download the work of others, and shake your fist of judgement as you influence their position on the leaderboards.

There’s a plethora of platformers on the market nowadays, and even a few with robust editing options. Some are pretty, others are as ugly as the walls of text behind their fundamental mechanics. None, however, are Organic Panic. It’s certainly the best game featuring vegetables and fruit that can walk and kill stuff, but it far exceed the expectations its description allows. After diving into its laundry list of levels, editor, co-op mode and destructible environments, it wasn’t hard to conclude that Organic Panic is one of the smoothest, most enjoyable platformers in recent years. It’s smart, fun, and most certainly my game of the show.

Before leaving the booth I asked what systems we could expect Organic Panic on. “Every device known to man, and some known to monkeys” was the response, and one that I hope is true. It’s a game that should be experienced by fans of gaming in general, as it offers something for even the saltiest of nonbelievers. Organic Panic was recently Greenlit on Steam, and I encourage anyone even remotely interested to check it out, watch the trailers, stare at some levels and, once it releases this year, play the living crap out of it.