It’s not too surprising that Llamasoft is sticking with Sony for a while, thanks to the success of TxK.  Not as an exclusive developer, of course, because PC and Mac versions of TxK are in the works, but giving Sony first dibs on new projects for a limited window of availability seems fair.  The direct result of this is the revelation that one of the developers Sony has lined up to bring content to their Morpheus VR headset is Llamasoft, as revealed by Shahid Kamal in an interview with Playstation Universe.

Jeff Minter has been playing with VR for a while, and tweeting about his new Minotaur Rescue VR experiment for a couple weeks, but without mention of a platform everyone just assumed it was Oculus Rift.  With the cat out of the bag, however, some more details have become available.  Basically Minotaur Rescue VR isn’t a full game so much as a gameplay experiment, getting used to the tech by the coding equivalent of poking it with a stick.  The main goals of the first VR game were to deal with minimizing nausea over extended gaming sessions while also testing how to make a game using only head movements.  These aren’t considerations standard gaming needs to worry about, but the body can have a very physical reaction when sight and motion don’t line up right, and no matter how immersive a game may be it really shouldn’t involve vomiting.  Therefore some testing is required, and the first result is Minotaur Rescue VR, thrown together over the course of two weeks and to be released as freeware in the next day or two.  They explain in the forum thread discussing the game’s release that it’s a bit small and unfinished to be considered a full game, but seeing as it’s a VR version of the Llamasoft’s iOS Asteroids clone it should still be pretty fun to poke around in.

There’s a couple other things that can be gleaned from this announcement, aside from a free mini-game from Llamasoft.  First off is that development units are out in the wild, which was assumed but is good to see confirmed.  The indie developer outreach Sony has been pursuing lately is extending to Morpheus as well, which should yield some nice experimental results to go with the usual FPS gaming one would expect AAA development to deliver.  Finally, it seems likely that, while Sony has confirmed Morpheus will miss Christmas, it probably won’t miss it by much.  The indie developers Sony will be relying on don’t tend to have the bankroll necessary to sit on a game for months while waiting for the hardware to exist, so if they’re working on something now then it seems likely Morpheus is well under a year away.  With any luck we’ll have more info at E3, which is somehow only five weeks off. 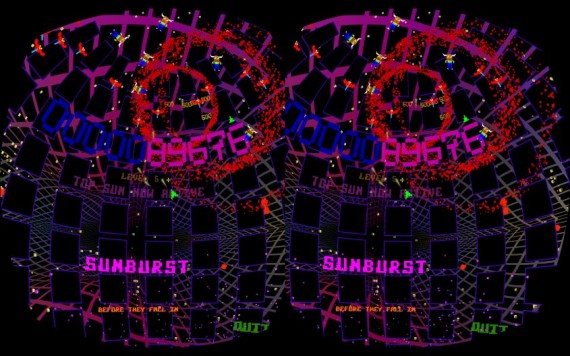