Several weeks back I took a look at some of the best and worst video games based on TV shows. With as much as people bemoan the poor quality of licensed games, there are still plenty of properties that have all kinds of potential to be made into great games. We’ve already taken a look at some of the past attempts at turning TV shows into games, so let’s look at some shows that could stand to be a given a chance at a game adaptation. In the last feature I focused on the most notable TV show games that have been made thus far, but here I am going to focus more on TV properties with great video game potential. The majority of these have never had a game come to market, and the few that did were forgettable attempts that don’t represent the property’s true potential. 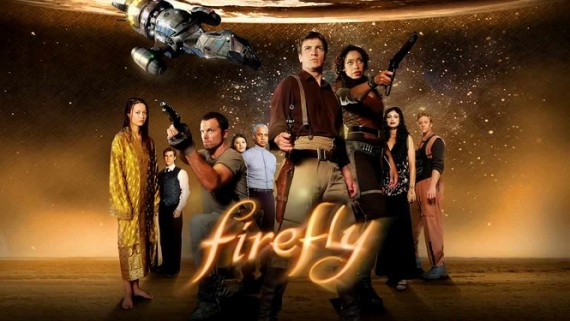 Firefly is the ultimate cult classic science fiction TV show. Created by the nerd icon Joss Whedon, responsible for Buffy the Vampire Slayer, Angel, and current creative overseer of the Marvel Cinematic Universe and director of the Avengers, Firefly is both his most beloved and least successful endeavor. Taking place about 500 years in the future, humanity has fled the Earth for a new (and highly improbable) solar system comprised of dozens of inhabitable (via terraforming) planets and hundreds of moons. The show revolves around the crew of a small transport ship, Serenity, as they take jobs of questionable legality across “the ‘verse.” What sets the show apart is its diverse and likable cast and the unique take on the future which mixes a pristine view of future society and technology with dirty and gritty western inspired elements.

The show’s premise is full of several elements that would be great in game form. An ideal game would blend the various elements of show into something that encompasses several genres. The space travel and job taking aspect would be a perfect fit for something along the lines of Freelancer. Traveling the system and taking jobs would translate great to this type of game, and even though Serenity doesn’t have any weapons, avoiding reavers and alliance patrols through skillful maneuvering could be a great way to add a degree of action and challenge to the space travel.

Another fundamental element of the show is the interactions between the various characters on the ship, which is where something along the lines of Mass Effect would be a good fit, specifically the crew interactions aboard the Normandy. Without getting too spoilerific, the movie Serenity leaves a perfect opening for a new essential crew member, which could be a great spot for the player character. Having the player control a new character interacting with the existing crew would be a perfect way to engage with these characters so many of us have grown attached to. The final key element of the show is the planetside interactions, usually involving lots gunplay, thievery, and bar fights, which is all right at home in the realm video games. 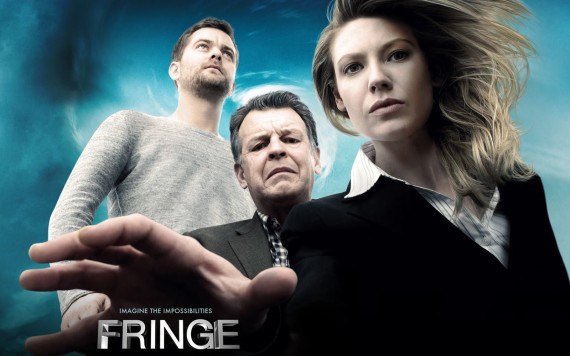 Fringe is another show that excels in a lot different areas. Originally conceived as a modern X-Files, blending a traditional network TV crime procedural with science fiction elements, the show evolved over time into a character driven, heavily serialized sci-fi show involving time travel, alternate universes, and superhuman abilities. As is often the case with network TV, the better and more involved the show became the lower the ratings dropped, though luckily it was given a respectable five seasons and was able to end on its own terms. The show’s mythology and science fiction plots was certainly enjoyable, but the real draw was in the three main characters, especially the eccentric Walter Bishop played by the great John Noble.

An ideal concept for a game based on Fringe would basically be a science fiction version of L.A. Noire. Even as the stories became more serialized and less procedural, the core of the show still revolved around the three characters solving bizarre crimes of suspicious origins. The show certainly had action, but it mostly revolved around crime solving and character interactions, which is pretty much exactly what L.A. Noire did as well. The compelling thing about this potential game concept would be that you wouldn’t just be solving murders or investigating arson, but tracking down shapeshifting androids, crossing into alternate realities, and battling technologically super-powered time travelling invaders. 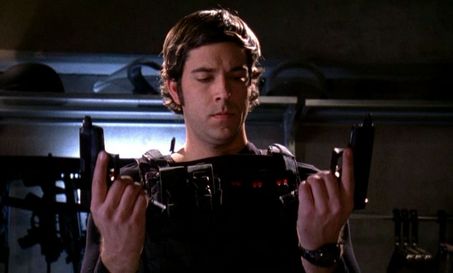 Chuck was a fun, lighthearted show about an ordinary twenty something underachiever who liked video games and comic books that just so happened to get a government supercomputer downloaded into his head. This computer initially gave him access to a database of top secret intelligence, but eventually he could utilize skill based programming allowing him to become a super spy despite his lack of training. The show was never a ratings powerhouse, but with an extremely loyal fanbase (and some key product placement support from Subway) the show just scraped by enough each year to continue getting renewed until it ended in 2012 after a five year run.

With it’s mix of espionage, action, and nerd culture in-jokes, Chuck is an absolutely perfect fit for video games. Not only does it have all the makings of a spy game along the lines of Metal Gear or Splinter Cell, but the nature of the main character’s abilities is practically begging to made into gameplay. An ideal game based on Chuck would be a third person action game with Alpha Protocol’s take on non-combat missions, an ability based hand-to-hand combat system, and game industry in-jokes similar to The Stick of Truth. Espionage is something that isn’t typically done much in games, despite the many games that features spies. Spy games usually amount to stealth and combat, but Chuck present an interesting opportunity to mix things up a bit with its unique setting and characters. 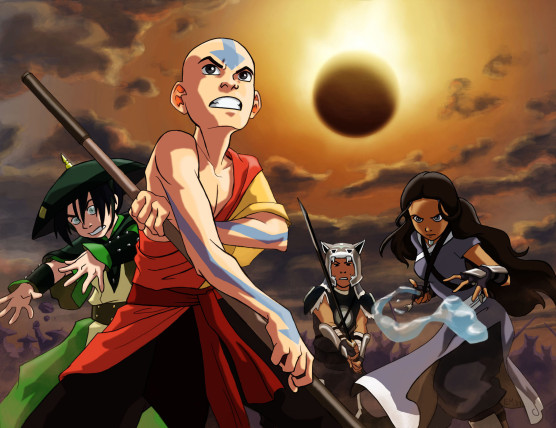 Despite airing on Nickelodeon and being targeted primarily at kids, both Avatar: The Last Airbender and its sequel series, The Legend of Korra, are among the best animated shows around. Mixing elements of fantasy, Asian mythology, and even some politics, there is a rich groundwork for both gameplay and new story possibilities. The universe has an incredibly deep and consistent lore spanning thousands of years as well as many endearing characters populating various time periods. There have been some games in the past, but they were straight up adaptation of dubious quality remembered most for the easy 1000 gamerscore they offered.

If the series was ever given a real chance at a game that was more than just quick retelling of the show, there is nearly limitless potential. The shows have only really covered two very specific spots in the thousands of years of lore that exists, so a game could really be set anywhere. Retreading events already seen in the shows would be a mistake because the basic framework of the fiction allows for all manner of different kinds of stories. With core of the fiction revolving around the four schools of bending which are basically elementally based superpowers, a game would ideally be a third person action game. With hundreds of avatars that have never been explored, the game could tell one of their stories, or even take a different route and allow you to create your own character. Creating a character and choosing a specialty, either one of the four bending disciplines or a weapon specialist, could offer a great deal of freedom. Whatever a game wound up being, with the clearly established abilities and rich fiction, a game based in this universe that was given real care could be fantastic. 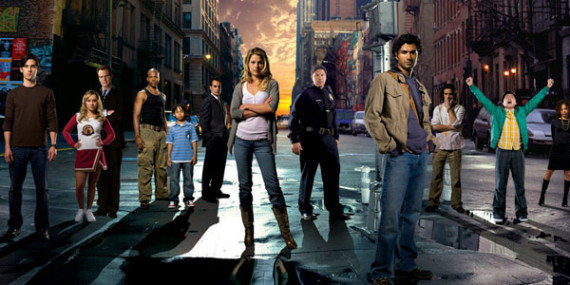 The last show I’d like to touch on is Heroes. Originally running from 2006 to 2010 and set to make an unexpected comeback in 2015, Heroes was a show with an amazing premise and fantastic first season that quickly faltered as it continued. Taking a more grounded and modern take on the X-Men formula of a small percentage of the population naturally developing superpowers, Heroes told the story of a number of ordinary individuals that all discovered they had various abilities. The main strength of the show was portraying how these different people handled their new found abilities. As the show progressed it dabbled in a lot of generic genre tropes like the government hunting down super-powered people and an a shadowy organization trying to synthesize abilities, though the subsequent seasons never reached the heights of the first season.

During the height of the show’s quality and popularity a game was at some stage of development, though as the quality and viewership declined it was eventually canceled. With the show’s premise it’s easy to see the potential for a great game adaptation. Ideally the game would be a third person action game that revolved around superpowers. The best route would be to have the player controlling a new, possibly created character that has a power of the player’s choosing. This way the player would be able to interact with the existing characters. A game telling the story we already know wouldn’t be very good, especially considering there isn’t much gameplay potential given the show didn’t feature much in the way fighting.

Those are just a few of the TV show properties that have interesting potential for video game adaptation. Given that most of these shows are no longer on the air the possibility of any of these actually happening seems remote, but these weren’t meant to be predictions. In all likelihood if any of these adaptations were to happen they wouldn’t be very good, but it’s not impossible. I am of the mind that video games present a great cross media opportunity to explore new stories and offer new experiences in already established fictional universes, but unfortunately most licensed games do little more than re-tell existing stories poorly. Still, with great licensed games like The Stick of Truth, the Arkham games, Telltale’s efforts, and the numerous great Star Wars games, I hold out hope that more will come in the future.