It’s not easy to think of being stranded in the cold void of outer space. While we’ve seen quite a few films tackle this subject matter, it’s very hard to envision what you would do if you were alone in the cosmos with nothing but a spacesuit keeping you alive. Being lonely is one thing, but there’s also a weird sense of wonder in flying through the Final Frontier. You’d spread your arms and rocket forward, twisting and turning in zero gravity without anything holding you back. That bizarre combination of unsettling isolation and childlike freedom drives the message of PixelNAUTS’ upcoming game LOST ORBIT, an exciting little game with a substance-packed narrative and game mechanics with plenty of promise. 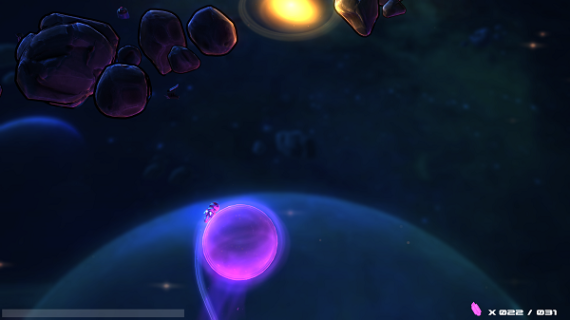 LOST ORBIT follows the travels of Harrison, an astronaut who must traverse outer space to find his home planet. Very little detail is given about Harrison himself or even the narrator who supposedly follows him throughout his journey, but the cryptic story captures all of the isolation and surreality of outer space intrigue seen in films like 2001: A Space Odyssey or Gravity. But at the same time, the game displays a playful, almost childlike sense of wonder as you play as Harrison spreading his arms and flying across the stars. It mixes comic innocence with sci-fi viscerality, offering a very strong and definitive identity.

One of LOST ORBIT’s best features is its presentation. The graphics mix a charming and toonish character design with an incredible visual aesthetic for the celestial bodies in each stage. Asteroids float into screen before bursting apart on collision, boost fields blast Harrison forward at high speeds, and a buttery-smooth framerate emits a constant wave of beauty. In one of the demo levels, Harrison approaches a giant dying star. While the star glows red, the visual effects wave off of its edges in solar flares and heated reactions. The scope used in this scene alone gives a brilliant vibe, harkening back to the famed Monolith scene in 2001: A Space Odyssey. Similarly, the soundtrack is absolute gold. The electronically driven themes that play in each stage constantly offer a sense of freedom and curiosity, not unlike that of classic 16-bit games. As Harrison flies, twinkling melodies and electronic scores play. Indie games have steadily become a breeding ground for captivating music, and LOST ORBIT’s stages benefit considerably with the soundtrack’s near-obsession with comforting and invigorating music. 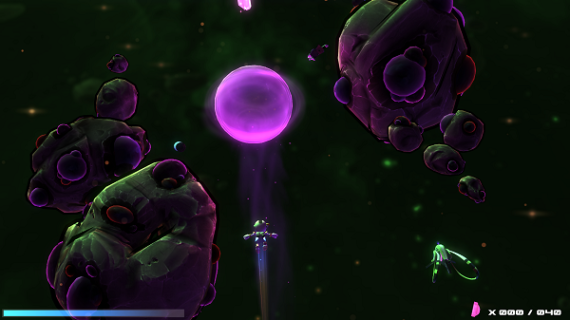 LOST ORBIT, despite its rather heavy subject matter, is a pretty straightforward title. You control Harrison as he rockets through space, dodging obstacles along the way. The game plays out like a 2D vertical shooter, though Harrison can turn around and fly backwards (though the line of sight is much more limited when reversing direction). Using a controller (which is the game’s best method of control), you can move Harrison around with the control stick and boost with the A button. The movement in LOST ORBIT is quite sensitive; making sharp turns is pretty difficult because of the rather large obtuse turning radius. You have access to some aerial tricks like barrel rolling, but movement is still pretty wonky, especially in the more confined levels. This is made harder with the Pac-man style “go to the right to appear from the left” level design. It takes a lot of getting used to and becomes mandatory very quickly in completing levels.

Taking cues from 2D shooters, LOST ORBIT’s levels offer items to collect (which can be used to upgrade Harrison’s abilities, though the demo doesn’t include the feature) and some neat little environmental objects that mix things up. Boost fields increase Harrison’s speed instantly (which can be both invigorating and nerve-wracking), while small planetoids let him orbit around them to build up speed. Of the available demo levels, there was a great amount of variety, while still keeping tried-and-true asteroid dodging in tow. It can be pretty difficult, though, especially if you’re trying to collect all of the items in each stage. Expect to die a lot before reaching victory. 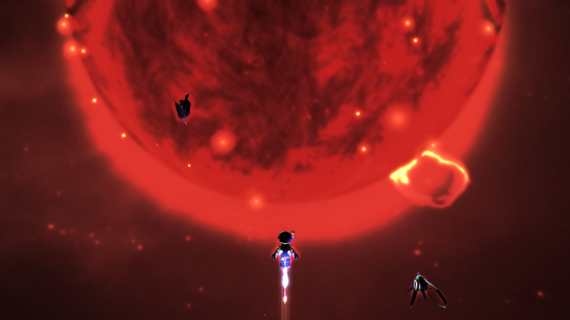 LOST ORBIT is shaping up to be a great indie venture. The controls have their moments of wonkiness, but the brilliant artistic design, wonderful soundtrack, and empowering sense of outer space exploration make this a game to look out for down the line. PixelNAUTS have taken a rather simple idea and given it quite a bit of both charm and substance, with plenty of new ideas shaping up for the game’s launch on PC this summer. Keep a sharp eye out for Harrison soon and check out the game on Greenlight.