Just like E3, Ultra Street Fighter 4 is headed towards us in a big, spectacular way. We’ve been through all the mysteries, all the drama and psyched ourselves up for the only major fighting game tournament known as Evo 2014. Just about everything surrounding Ryu and company has been taking shape with this new version of the game.

While updated tier lists, reworked strategies depending on particular characters and the speculation of tactics that famed players like PR Balrog and Inflitration may have up their sleeve, USF4 is also taking  YouTube uploads of matches that occur in the game. However, the only problem with that is that the quality of the uploaded will only be posted on the juggernaut video site in 480p format, as Peter “Combofiend” Rosas put it. 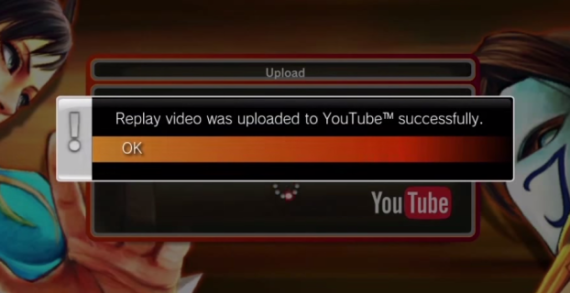 “We initially set the record function at 720p. As we don’t believe players have that much time to wait for their match to be uploaded, in addition to the fact that they are probably more concerned with showing off their latest victory or asking for feedback on their latest match as quickly as possible, we decided to proceed with 480p,” Rosas said.

This move is actually a nice one. 480p video quality isn’t exactly the best that that YT has to offer, but it’s better to wait for your best matches to be uploaded in a hasty fashion rather than waiting around before your next fight. I’m assuming that once the game hits retail, the wait time for uploads will also vary between a player’s internet connection.