You have a real gem on your hands, so please don’t pass this opportunity up. You may think the days of the company mascot are long gone, that Crash Bandicoot, Sackboy, and Mario do nothing to meet the all-important bottom line. Why should you care about putting a cute, funny face at the forefront of your marketing campaign? It’s not the 90’s anymore, this stuff can’t possibly work, right? Look, I’m sorry that my hypothetical illustration of your company’s morals makes you appear heartless and robotic, but at times you do appear that way. You are searching for a way to increase Xbox One sales, hoping that something you do you will help you catch the PlayStation 4. Well, it may not be the be-all-end-all solution, but you can start by making Sunset Overdrive‘s Fizzie the face of the Xbox Division.

There is a great number of children floating around whose first video game console will either be an Xbox One or a PlayStation 4. You want these suckers — I mean kids — to become attached to the Xbox name rather than that of PlayStation. These are the customers that will buy your next console without a second thought, as they will be deeply loyal to your brand. If one kid buys an Xbox One, then all his friends will buy one too, as no one wants to be that smelly bottom-dweller stuck by himself on the PlayStation Network. An adorable mascot will help hypnotize these dollar signs — I mean kids — into gravitating towards your black box. They won’t know why, they won’t understand their feelings, but they will know that the Xbox One is the console for them. 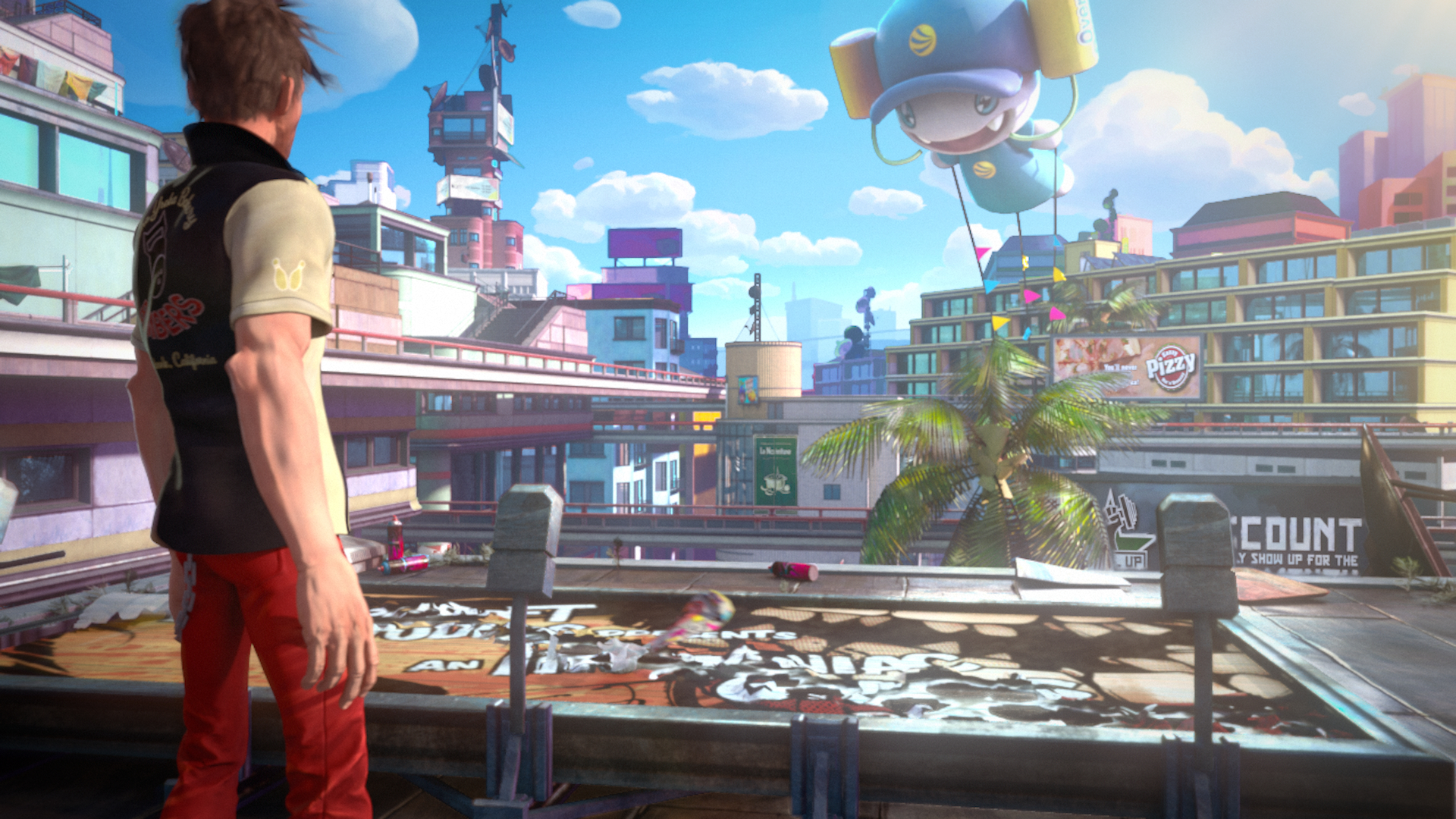 But let’s forget about the money for now, Microsoft. This purple goober has the potential to give you power. In the words of Frank Underwood of House of Cards, “Money is the McMansion in Sarasota that starts falling apart after ten years. Power is the old stone building that stands for centuries.” Fizzie’s personality will allow you to say anything you want without backlash. Talk trash to Sony and Nintendo; call your customers stupid; make fart jokes; who cares? Nothing is off limits to Fizzie. If Fizzie was the face of the Xbox Division, you’d have access to the world’s most adorable Internet troll. The best part? Insomniac Games already did all the work for you, as they recently set up the @FizzieSays Twitter account.

In less than a week, the rapidly-growing Fizzie account has crapped all over the Xbox One, Shaq, and Coca-Cola, among others. He has been so ridiculous that  Twitter temporarily suspended the account because it thought that Fizzie’s evil demeanor couldn’t possibly be real. He is obnoxious and rude under the veil of cuteness; to put it simply, he can get away with anything. When he Tweeted about Coca-Cola containing dangerous, deadly chemicals (which is ironic, considering in Sunset Overdrive, the energy drink OverCharge Delerium XT causes residents of Sunset City to turn into evil mutants), he angered the soda giant. He had to delete his tweet, but not before calling the soft-drink company whiny in less than 140 characters:

In case you missed it, Microsoft, here are some of the highlights of Fizzie’s strange few days:

If @aaroncarter beat @SHAQ – we're pretty sure we will, too. RT @KarlThomas9 can you guys compete with Soda Shaq? pic.twitter.com/31y6ghmTjk

. @Xbox Look! We made the Xbox One even better! You're welcome. pic.twitter.com/S9rg3G80A8

Hey, @majornelson! You’d be a Lieutenant Colonel by now if you drank more OverCharge! #ShouldaDrankOverCharge

To which Major Nelson responded:

. @majornelson Woah, woah! So much hostility, Larry. Did the desert sun get to you that much? Seems like you #ShouldaDrankOverCharge

C’mon Microsoft, make the logical choice here. I don’t want to see you miss the chance to re-brand yourself as the “fun” video game company, especially after the 2013 TV debacle. Even though the Xbox One is selling like gangbusters, the community thinks you’re in real trouble. You need to do something to show gamers that you understand them; we’re ridiculous, we have extreme views, and we love a good laugh. Give us more Fizzie, Microsoft. You are supposed to be the “All-In-One Entertainment system,” so make Fizzie the face of your gaming division and prove to us how entertaining you really are.