Heroes are very useful to have around. They’re tough, capable, and generally able to complete a level on a single life with a bit of practice. Minions, on the other hand, don’t tend to have that level of power and resilience. They operate at a more human level, but on the plus side there’s lots of ’em. Life Goes On is a game in need of a hero, but seeing as none are available the only thing to do is throw as many minions at the levels as necessary.

The minions in Life Goes On are knights, and they’re actually pretty good at what they do. They can run and jump in the usual side-scrolling platformer way, push things around, and leave behind a handy corpse. They’re one-hit wonders, and the spikes, flamethrowers, ice-jets, and electric panels of the the dungeons kill them in different and handy ways. Thankfully you’ve got an infinite supply of knights, ready to materialize at the last checkpoint to valiantly try again, and the body of your forerunner is more than just a sad reminder of the current minion’s fragility. That corpse has weight, good for holding down pressure plates, and its metallic armor does a great job conducting electricity. It may take a bit of puzzling over how to get it to where it needs to be, but once in place it’s just what you need to push on further to the goal. 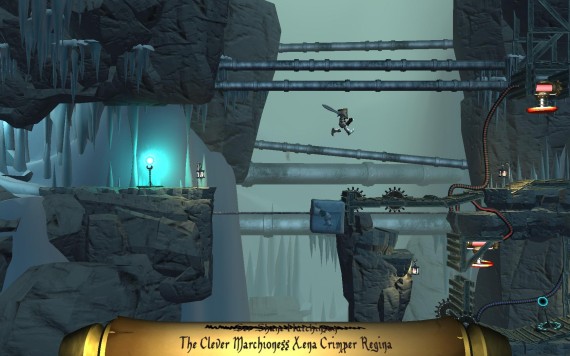 Each level in Life Goes On is a puzzle, and it’s going to take more than just throwing tons of knights at it to figure out how to progress. Using a knight you’ve killed by freezing, which encases it in a block of ice, involves more than just pushing it about onto a handy switch. You can give the block a push up a nearby slope so it slides down, using the momentum to fling the two of you across a gap. In another puzzle the block might need to be pushed at the slope, and then you run away to a blocked passage because the trajectory of the block is going to take it over a switch that turns on the flamethrower behind you and turns off the one in front, granting access to the next area. Or maybe you just need to figure out how to escort the block past a series of obstacles to use it as a handy stair later on in the level. Each hazard in Life Goes On uses the knight’s bodies in a number of ways, and the ingenious levels need a lot of experimentation to learn the right path to victory.

The first run through a level generally ends up a massacre, however, with knight bodies practically filling up every nook and cranny. They hang off spikes, cluster around switches, fall to the floor under buzzsaws, and in general make a mess of the place. This will not do, and there’s no medal granted for minion-wastage. Each level has three goals to strive for, ranked by time, lives lost, and finding the hidden beastie who likes to chow down on whoever finds him. It was hard to resist going back for at least a gold in all three stats on every level, although the highest reward for time (which for some reason is Purple rather than Platinum) required a level of perfection that was usually too finicky to be fun.

While the puzzles are excellent and the platforming decent, the controls are a bit too loose for the precision needed in chasing after the perfect run. Jumping on a bed of spikes to leave a body behind as a platform for the next knight is easy enough, but landing on a single knight’s body can be fairly iffy. That’s a lot simpler than the cannons, though, which shoot your knight (at the expense of its life, of course) towards necessary switches or circuits. You aim the cannon with the left stick, and for some reason it’s got a level of momentum that makes precision aiming feel like an argument rather than instruction. A couple light taps wobbling the aim back and forth are generally enough to put it right, but if you’re speed-running in the way the game encourages that’s not time you want to be spending. It’s not particularly helpful with life conservation either. 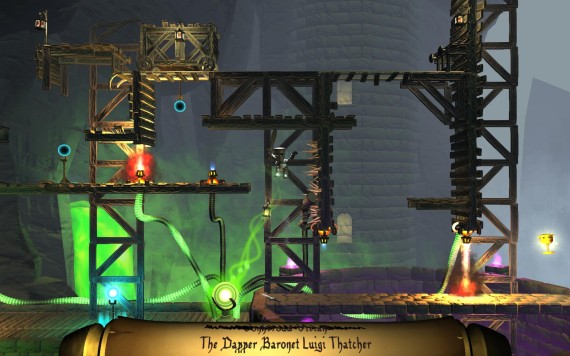 Life Goes On could use a last pass in a aspects of its controls, but the puzzle design is what makes the game work so well. Spiked conveyor belts carry bodies to pressure switches, but only if you can figure out how to turn off the flamethrowers to avoid incineration. Green switches turn on devices so long as you’re alive, but dying turns everything off again meaning you need to figure out how to sacrifice your knights in just the right order. Spiked walls are impassable until you impale a few knights on them to use as hand-holds, and spiked floors work the same. There’s booby traps and pits, physics puzzles everywhere, and a good sense of humor tying the whole game together. Life Goes On is a clever and fun puzzle/platformer with a surprising amount of replayability, and if that results in a few thousand dead minions, at least they left a helpful corpse behind.