The Sunset Overdrive blowout week continues, as Insomniac released a new trailer for the upcoming third-person shooter today. While the original E3 trailer only showed a brief, CG glimpse into the world of Sunset City, we finally get to see what Insomniac Games’ upcoming Xbox One title looks like in action. That’s right, gameplay footage has finally arrived, and sweet Mother of Mercy does it look fun:

Set in the year 2027, Sunset Overdrive takes place in a city overrun by FizzCo., an evil corporation that just released its newest energy drink, OverCharge Delerium XT. The drink causes a great deal of Sunset City’s residents to turn into OD’d, orange mutants whose penchant for death has spawned the “Awesomepocalypse.” Your character bounces around the city, utilizing parkour, grind rails, and incredible jumping abilities to avoid the hoards of OD’d. Gone are the standard, cover-based third-person shooter mechanics of yesteryear; your customizable character stays unharmed through the use of movement.

The trailer gives us glimpses into the insanely colorful world of Sunset Overdrive, highlighting a small number of the game’s factions, enemy types, weapons, and amps (special abilities). In addition to your character, the Troopashido (soldiers who recently adopted the Samurai ways of ancient Japan) and Fargarths (LARPers whose fantasy world has now become a reality thanks to the Awesomepocalypse) will fight the OD’d. The small OD’d from the original CG trailer appear to be the most populous, with various special enemies appearing sporadically throughout Sunset City. The trailer showcases Herkers, who throw smaller OD’d at you, and Blowers, larger OD’d with a leaf-blower attached to one of their arms. 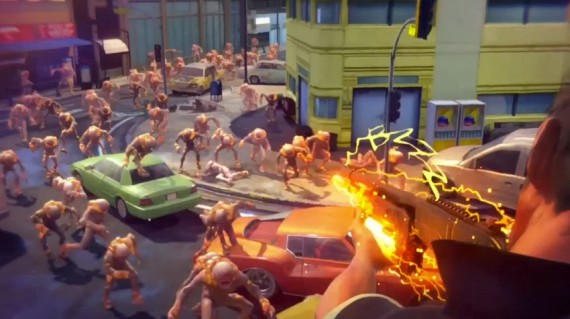 The classic Insomniac weaponry is in full force in Sunset Overdrive, with a number of weapons shown off in the trailer. Insomniac highlighted three of the numerous death-machines in the game: the Captain Ahab, the Roman Candle Gun, and the TNTeddy. The Captain Ahab squirts orange goo that draws groups of OD’d towards it (much like how flares work in every zombie game ever), allowing you to rack up massive combos. The Roman Candle Gun does exactly what you think it does; it shoots off a colorful barrage of roman candles. Finally, the TNTeddy is a brilliant take on the traditional rocket launcher, as it fires off teddy bears equipped with multiple sticks of dynamite. Players also have the ability to unlock amps, which give your character special powers, such as an air dash or the ability to throw small tornadoes, making your fight a simpler one.

Sunset Overdrive is current set for a late 2014 release, and if this trailer is any indication, the game will be well worth the wait. Xbox One users might just have that “killer app” they’ve been waiting for.