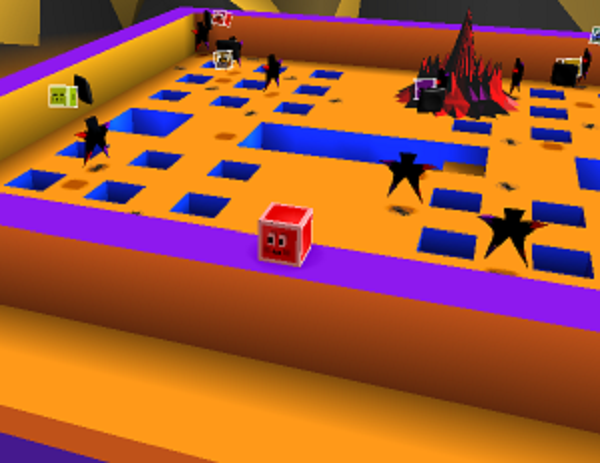 Designing video games is something of a dream for many young kids in high school. They take the programming classes, they read the textbooks, they want to get involved in the industry and make the next big hit on Steam. But as we all probably know, game design isn’t easy. There are so many things that need managing and structuring when designing even the simplest of software. So many people, so many roles, but development Bplus continue their Bit Boy series with the 3DS eShop game Bit Boy!! Arcade, a puzzler that also serves as a look into how a game is made, from concept to the final test. Bit Boy!! Arcade is a game that wants us to learn about game design, but ironically, fails to follow the fundamentals of that craft.

Bit Boy!! Arcade puts you in the role of Kubi, a sentient block AI who becomes acquaintances with a floating pixelated head. Turns out the head is the avatar for his creator Bernd Geiblinger and he’s trying to revive Kubi after his supposed death in the previous Bit Boy!! game (Geiblinger is actually the digital representation of the CEO of Bplus, the game’s developer). It’s up to Kubi and Geiblinger to trek through the levels of the game, gradually rebuilding the game that supports Kubi’s existence. Throughout the journey, the game does offer some creative insight to how games are created, from the technical jargon to the more abstract steps like conceptual mapping. The game definitely serves that creative approach well, though the characters themselves tend to seem very one-dimensional and very little in the narrative shows any sort of twist or topography. It emits a very “edutainment” vibe, but that informative purpose rarely becomes tiresome.

The game itself is a twist on classic arcade games like Pac-man and Centipede. You move Kubi throughout the levels, searching for his imprisoned friends, which appear on the level as floating blocks. Once all blocks are freed, you must dash back to the entry portal to complete the level. Along the way you can collect PixelFlies for more points or earn a time bonus by finishing the level quickly. Upon finding all of the blocks, Kubi gets a rainbow-bursted invincibility, which can be used to plow through enemies for more points. The push for points is a big part of the game’s appeal; it focuses on the most fundamental of arcade ideologies, and for the most part, it’s a solid structure. It’s nothing mind-blowing, but if you crave high scores and time attacks, Bit Boy!! Arcade will deliver.

However, that structure is one of the few things that Bit Boy!! Arcade does well. The game sadly suffers from a number of simple, but intrusive problems that make each level a slog. The most apparent problem is the controls. You control Kubi using either the D-pad or face buttons. Pressing left on the D-pad or the Y face button to move left, right on the D-pad or the A button for right, etcetera. You can also move faster by pressing both the face button and its D-pad direction counterpart. This sounds accommodating at first, but this leaves camera control solely on the Circle Pad. While this might be okay for left handed gamers, controlling the camera using the Circle Pad is awkward and very difficult to get a handle on. The only other option is to simply not control the camera at all, but that makes things even worse because the camera is a constant problem. It routinely offers bad angles, usually resulting in unseen enemies killing Kubi on contact. Even worse, you are never offered a full view of the level (which could’ve easily been on the bottom screen, where instead we see Kubi and Bernd’s faces), so cheap deaths are almost guaranteed. 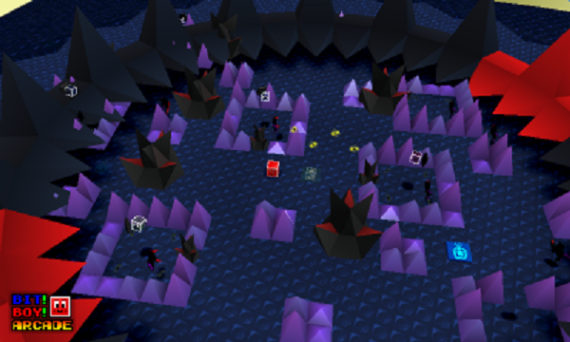 And as if cheap deaths aren’t bad enough, the level designs are constantly frustrating. Bplus’ choice of level designs leaves many stages with dead ends; if an enemy comes down the corridor to a dead end with you already in it, you’re dead. There’s no way around this and it makes exploring each level very unsettling. This could’ve been easily remedied with a full level map, but with neither a map nor any way to defend yourself in these kinds of situations, stages are frustrating and restrictive. Kubi himself can use power-up pads in certain stages to do damage to enemies like exploding as a bomb or rocketing to an escape, but these are only available in certain levels, leaving the most basic of stages as dangerous tests of chance. The game does have a pretty novel use of the 3DS’ Play Coin system, where two Play Coins (which can be earned with Street Pass) can buy you a continue after your lives are depleted, though I ended up using over 10 Play Coins trying to complete a single, messily designed and terribly obscured level. Bit Boy!! Arcade displays a lack of precise level design at every turn and it leads to nothing but frustration.

The presentation in Bit Boy!! Arcade is probably its most interesting feature. With bright colors, nice 3D architecture (though it’s frequently obscured by the terrible camera), and creative character design, the game emits a laid-back vibe that’s cool to look at. The diverse visuals like polygonal shapes on the overworld and a solid color palette keep the game upbeat without cluttering it too much. The audio, however, is a mixed bag. The soundtrack has the charm of a classic 80’s puzzle game, but the voice acting (yes, there’s voice acting) is mismanaged. Bernd has a humble tone that sounds like an instructor of sorts (good choice for the narrator), but Kubi’s voice is absolutely terrible. For some reason, Bplus thought a happy-faced red cube needed to have a bellowing baritone; it makes Kubi’s character unappealing and terribly out of place. This is made worse with Kubi’s dialogue. The low voice makes his eager phrases toward exploration sound less enthusiastic and more just being a jerk. It sounds insignificant, but Kubi’s voice destroys what would otherwise be a charming character for the series. The presentation has its highs and lows, but for the most part, it serves its vibe respectably.

Bit Boy!! Arcade is a very flawed puzzler with constantly unorganized level design and a punishing control setup. The camera controls damage any sense of precision and fluid navigation in a puzzle game, which is made worse by puzzle designs that don’t feel fully thought-out. After getting trapped in a corner for the twentieth time, you’ll start to grow tired of the game’s knack for haphazard design, and with such a mishandled main character, you’ll start to grow tired of the game’s story as well. It’s a shame, because the nice visual aesthetic and the rather traditional recreation of arcades with the Play Coins, Bit Boy!! Arcade could’ve been a sleeper hit on the 3DS eShop. Sadly, though, it’s simply not fun to play. The cheap deaths and awkward controls make every level a struggle; you’ll frequently be pulling your hair out simply because you couldn’t see the enemy that killed you. There are much better puzzlers on the 3DS eShop than Bit Boy!! Arcade, so you’re better off skipping this flawed endeavor unless you really want to hear a red, cherub-faced cube talk like a serial killer.