Borderlands 2 is a key title for the PS Vita.  It is supposed to serve as proof that console quality games can be ported to the handheld, and prove that Third-Party titles can succeed on the platform.  We’ve been working hard to bring you a review of Borderlands 2, but at the moment it isn’t possible.  Borderlands 2 is currently plagued with game-breaking bugs that have hindered our progress through the game.

One nasty bug in the Bloodshot Stronghold is mostly to blame.  When trying to pass a certain hallway in the area, the audio cuts out.  After a few seconds the game permanently freezes.  The only way out is to press the PS Button, and end the game.  This isn’t a save file corruption, and nothing went wrong during the installation.  To make sure, I started new games and reinstalled the game, but nothing worked.

It isn’t just us having issues with the game.  Players on both NeoGaf and Gamefaqs have begun compiling lists of different bugs and crashes that have plagued them.  Some of these errors, the C2-12828-1 error and the game crashes on Three Horn to be precise, I have also suffered.

So, what does all of this mean?  We are reaching out to Sony about these issues and whether the game will be patched in time for the standalone launch on May 13 (the game is already available as part of the PS Vita Slim bundle).  Hopefully they can enlighten us on these troubling issues.

With that said, whether the game is patched or not, our review of the game will go up on May 13 when the game launches.  It is not fair to you, the consumer, to go and purchase a game that is in as broken of a state as Borderlands 2 is.  We strive to make sure that you are not left in the dark on issues such as these and our review will reflect the state of the game at launch.  We sincerely hope Sony can fix these problems soon.

A workaround has been found for the Bloodshot Stronghold bug that causes the game to permanently freeze.  A GameFaqs member figured out that if you stand completely still while the game attempts to auto-save, the game will not freeze. I attempted this with my Psycho and Commando characters, and both were able to pass after a small wait.

This will only happen in the Bloodshot Stronghold near the second respawn machine.  Below is a photo of the game frozen near the respawn point: 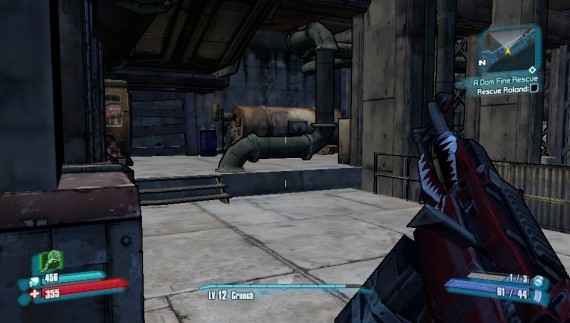 We are working with Sony on finding a fix for the issue.

When our review goes up, the game will be judged on all of its merits including gameplay, story, design and presentation.