The twin-stick shooter is a versatile little genre. You’ve got you classic Robotron-style arcade games like Geometry Wars, Mutant Storm Reloaded, and We Are Doomed, and more action-adventure like Renegade Ops and Nuclear Throne, plus a whole host of variations in between. Zenzizenzic falls on the arcade end of the spectrum but brings its own wrinkles to the formula, shoveling a heaping helping of bullet hell into the mix while nicely complicating things with special weapons and movement options. It’s also on Kickstarter with a public demo (Windows, Mac, Linux) available to play.

First things first- zenzizenzic is an obsolete mathematics word meaning “to the fourth power”, or to put it another way, X squared and then squared again. A quick look at the graphic style and this makes perfect sense, because 90% of everything is squares. You, the enemies, most of their shots, and just about everything else is made of squares, although frequently with colorful decorations that obscure their square origins. It makes for a striking style that has the advantage of being easily read, which is important when the bullet waves turn to a screenful of death. 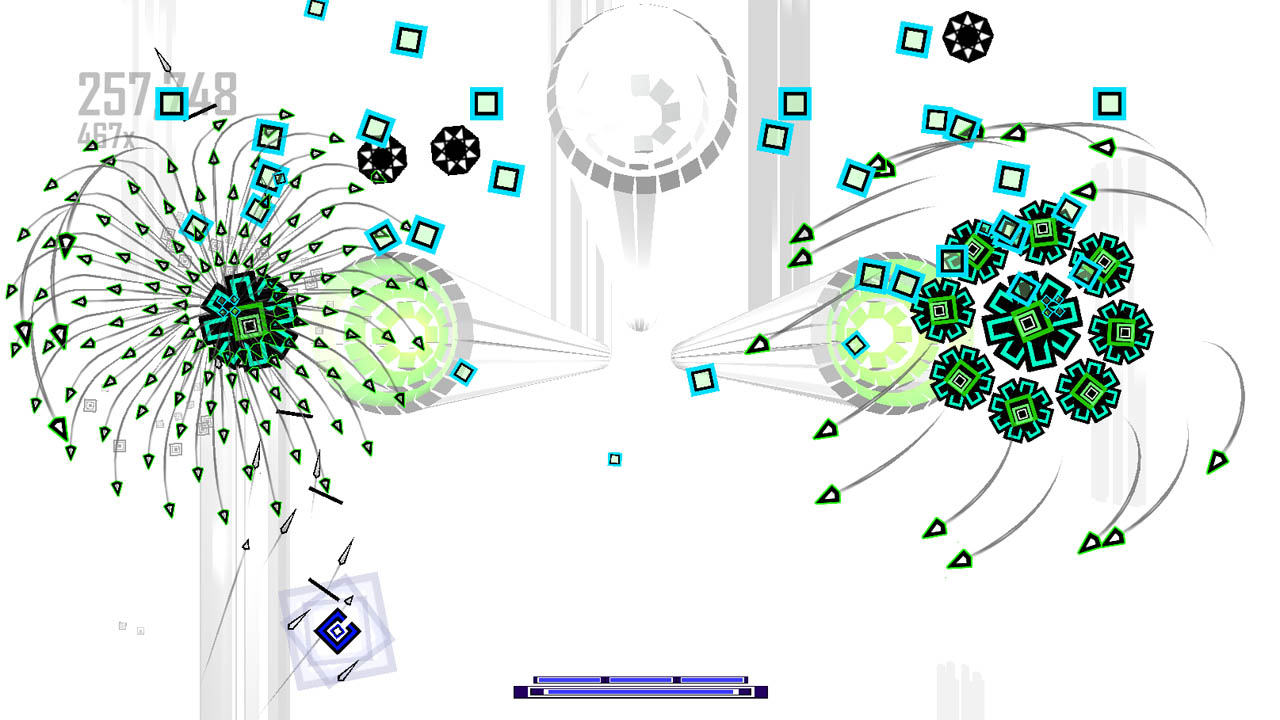 Like most bullet-hell games, Zenzizenic is heavily pattern-oriented. Each level is a set wave of enemies, although doing well means you’ll get rewarded with tougher encounters that wouldn’t have shown up for less-skilled play. Enemies swarm in from the side, top, and bottom, rather than teleporting in, with waves of popcorn enemies flanking bigger, tougher designs that spit out lovely geometric death-patterns. Like most twin-stick shooters your instructions are Shoot Everything!, but there’s a few more options than normal available.

First off, you can speed up or slow down with the triggers, and this has an effect on how your weapons fire as well. Destroyed enemies drop the occasional power-up to enhance your firepower, and those enhancements will move faster or slower depending on your speed. They also drop a shield power-up, which not only does its expected job of absorbing a hit but can also be spent to throw out a brief bullet-canceling field a short but very helpful distance from the player ship. Finally, you get two special weapons that can be assigned to the left and right bumpers, selectable from a library of eight. They’re rated on difficulty from easy (homing missiles) to hard (a black hole that charges as you hold down the bumper and then travels slowly in the direction you fire, and hitting the bumper again activates it to suck in surrounding bullets and damage any enemies it touches. Hard to use but very powerful).  The setup is a bit more complicated than the usual Point & Shoot but a big help in taming the throngs, and if even all this power isn’t enough to avoid death you can always spend 500,000 points on an extra life at any time.

The standard beta demo is available to all, downloadable here, and is easily recommended.  It contains the second level in its entirety, all three difficulty levels, and three out of eight secondary weapons.  If it strikes your fancy and you can’t resist thrown a few Euros the Kickstarter’s way the first 80 backers get the full beta, which contains four out of five levels and most of the extra weaponry.  If it isn’t apparent already, I thoroughly enjoyed the public demo and been having a complete blast with the full beta.  Each of the levels focuses on a different kind of challenge, changing from enemies that shoot homing missiles, or those that drop walls to cordon off the arena.  It’s a great mix of smaller enemy waves and larger set-pieces that constantly keeps you on your toes.

At the moment the Kickstarter is going slowly, although seeing as its target is low it’s still on track to succeed.  There are some optimistic stretch goals, though, and the big one is that, if it reaches €10,000 then a second game will be developed.  Zenzizenzic: Macro would leave the arena behind and take the game into a randomized open-world setting.  It’s described as rogue-like, and has a few RPG elements like player progression, secrets, and environmental challenges.  Based on my play-time so far Zenzizenzic has already proven itself, so more would only be a good thing.  Give the Kickstarter a look, kick the tires on the demo, and maybe with a bit of attention and lovin’ we can get two great twin-stick shooters from a single campaign.