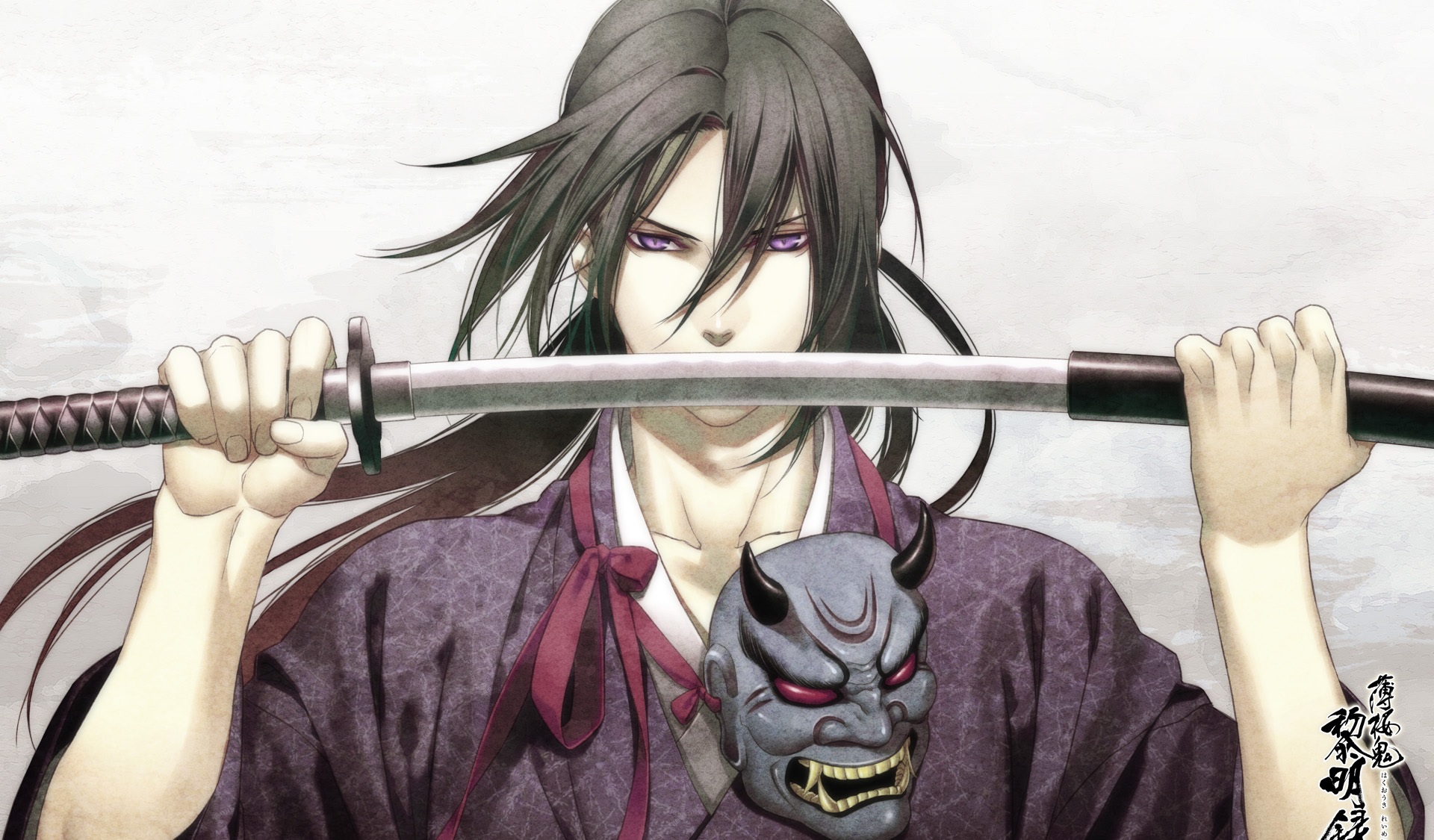 Hakuoki: Stories of the Shinsengumi has a lot of obstacles to overcome with regards to expanding its audience and finding any kind of niche or mainstream success. As an otome visual novel that’s a port of a PSP game from a developer with an inconsistent track record, it’s clear to see that Hakuoki for PlayStation 3 is fighting an uphill battle. But, for all of the inherent challenges it faces, does it somehow turn those ideas on their head and deliver an experience worthy of a player’s time?

Hakuoki: Stories of the Shinsengumi is a historical fiction piece framed around a group of ronin tasked with keeping order within a mid-19th century Kyoto. To spice up all of the included samurai-driven excitement, there are some supernatural elements that keep the story interesting and, for the most part, unpredictable. But the main star of the game isn’t the ragtag group of mercenary sword-wielders; it’s the primary protagonist, Chizuru Yukimara. Chizuru is a young gal on her way to the big city in hope of finding her missing father. However, her search takes a quick and unexpected turn, when prowling the streets of Kyoto she stumbles upon a few unscrupulous ronin whom are after nothing more than her belongings and prized, familial-kept katana. After attempting to flee her robbers, she’s eventually cornered. With a bleak-looking outcome, Chizuru resigns herself to the fact that she is at the end of the line; however, just before that happens, a trio of crazed, monster-like samurai appear out of nowhere and begin hacking up the three assailants.

Cowering from an alley, Chizuru watches the whole thing unfold and takes particular note of just how savage and downright brutal the slaying is. After the initial shock wears off, Chizuru attempts to escape the scene of the crime, but gives herself away in the process. After landing herself yet again in a situation in which her life hangs in the balance, a group of three men from the Shinsengumi — a sort of special forces policing unit within the military government known as the shongunate — show up on the scene and dispatch the zombie-like samurai with blades of their own. Taking into consideration the sensitivity of the situation, the shogunate men capture our fair heroine in an attempt to contain the events of the evening. Upon confinement, the three Shinsengumi take Chizuru back to their headquarters where they decide on what to do with her; the choices are binary, though: kill her, for she saw and now knows too much, or spare her and keep her within their ranks until they can figure out how to better deal with her in the future. We won’t go any further into plot details, for the sake of not spoiling the entire experience, but we can say that the story and action begin to heat up quickly, often leading to wild segments filled with sword-clashing’s, killings, political intrigue, and yes, as the otome label implies, some romance.

But before we get to all that, we would be remiss to only discuss Chizuru as a character, because the truth is, Stories of the Shinsengumi is almost an ensemble cast production. After all, there have to be love-interests for our gal; thus, there are a handful of core ronin she can take interest in. Ultimately, it’s in the cast and the cast member’s distinct interactions with one another that make up the bulk of Hauoki’s experience. But even outside of the immediate characters, the roster of personalities here is vast and diverse. Each person has their own history and struggles, essentially creating a story that rarely plods or loses steam. Because the big players of the story are spotlighted often and in unique circumstances, folks will get to see a variety of situations unfold that deliver on excellent narrative devices. Interplay between the characters can go from light-hearted to painfully serious at the drop of a hat, and it’s this ebb and flow that ignites a firestorm of memorable moments. Even better is the pace at which the story unfolds — it’s kept brisk throughout, seemingly aware of when to stay with an event and when to move onto the next. Prior to firing up the game, we were somewhat fearful that it would be a slow-burn of a plot, but the writers didn’t waste any time with plunging folks right into the thick of it. It does take a while to reveal the title’s biggest mystery, but even still, the leading up to that unveiling is compelling enough to overlook that gripe.

A lot of this comprehensive, genuinely interesting character development stems from the writing itself. As a visual novel, it’s imperative that it reads well — after all, the entire experience truly is derived from the words being used and subsequently read. Therefore, if the prose are lacking, the overall entertainment plummets dramatically. Fortunately, the game very rarely lacks in this department, making for a wonderfully written tale. It should be noted, though, that this is M-rated , which is abundantly obvious from the text, language used and scenarios that take place. Still, though, this is a well-articulated localization, as the mere range of vocabulary in and of itself is impressive, seemingly finding just the right word to describe some kind of gesture or facial expression not fully portrayed in the title’s graphics. Moreover, there were honestly only a handful of typos, which isn’t an accomplishment easily obtained in the world of visual novels, especially for one as large as Hauoki is. In fact, this is one of the strongest translations we’ve seen in the genre.

It’s important to talk about Hakuoki‘s production values as well. As a game that is equal to an interactive novel or manga, one might think that there wouldn’t be much in the way of Shinsengumi’s graphical prowess. Although it certainly doesn’t push the PS3 to its technical limitations, for what it is, it’s a nice looking game. Backgrounds are gorgeously illustrated and character designs and portraits are vibrant and expressive. Unfortunately, the background images are re-used too frequently, almost to a criminal degree. If nothing else, these recycled assets seem to highlight laziness on the part of the development team. As a visual novel, it’s important to keep the player engaged at all times, and often that can be accomplished by giving them some kind of aesthetic payoff. With Shinsengumi, though, that payoff doesn’t occur as much as it should.

Speaking of a lack of variety, the soundtrack is also decidedly undersized. Meaning to say, folks will hear the same handful of tracks over and over again throughout the lengthy adventure. It’s a shame that there wasn’t more variation, because the tracks that are present are phenomenal. They convey emotions and set the mood for every scene with a heralded degree of accuracy; but hearing the same theme each time a significant crescendo is about to take place strips the moment of much of its drama. Outside of the OST and visuals, though, Hakuoki is generally a well put-together game from an aesthetic standpoint. The text is clear, simple and easy to read, the text boxes are interesting without being so much that they detract from the actual reading and the menu/interface system, by and large, is very clean.

All that aside, we have to address the notion that this is an otome game. That may scare some folks off; after all, it’s easy to judge such games as endeavors not meant for male audiences. But the truth here is that the courting of male samurai is kept fairly to a minimum. At all times, the romantic elements of the game feel incredibly secondary, and even tertiary at times. In fact, players would be mistaken if they opted not to check out Shinsengumi simply because of its genre, because absolutely anyone, regardless of gender, can enjoy the amazing tale being told here. It’s good enough to warrant multiple playthroughs, which is basically required to see all of the different events and endings, as the player is presented with various story-altering choices at several intervals throughout the adventure. In other words, Shinsengumi sports a fairly high replay value, especially considering the amount of unlockables present, in addition to the option of playing through a extra mode that re-imagines the whole Hakuoki cast in modern day Japan. Simply put, for a visual novel, this is a beefy game in terms of sheer size and content.

Hakuoki: Stories of the Shinsengumi is a great visual novel. Yes, it’s an otome game, but that shouldn’t deter you because the romance and courting of samurai are only a fraction of the overall experience. The majority of the game is actually found in its expertly-written characters and dialogue, as well as its downright captivating narrative. The mature themes, masterful story pacing and spot-on localization only serve to further enhance those aforesaid characteristics. Yes, Hakuoki has some shortcomings, mostly in the way of its recycled art assets and audio, but those qualms are minor when stacked up against everything else the game does well. If you’re looking for a spellbinding visual novel, then don’t waste another minute searching for one, because Hakuoki is what you want.