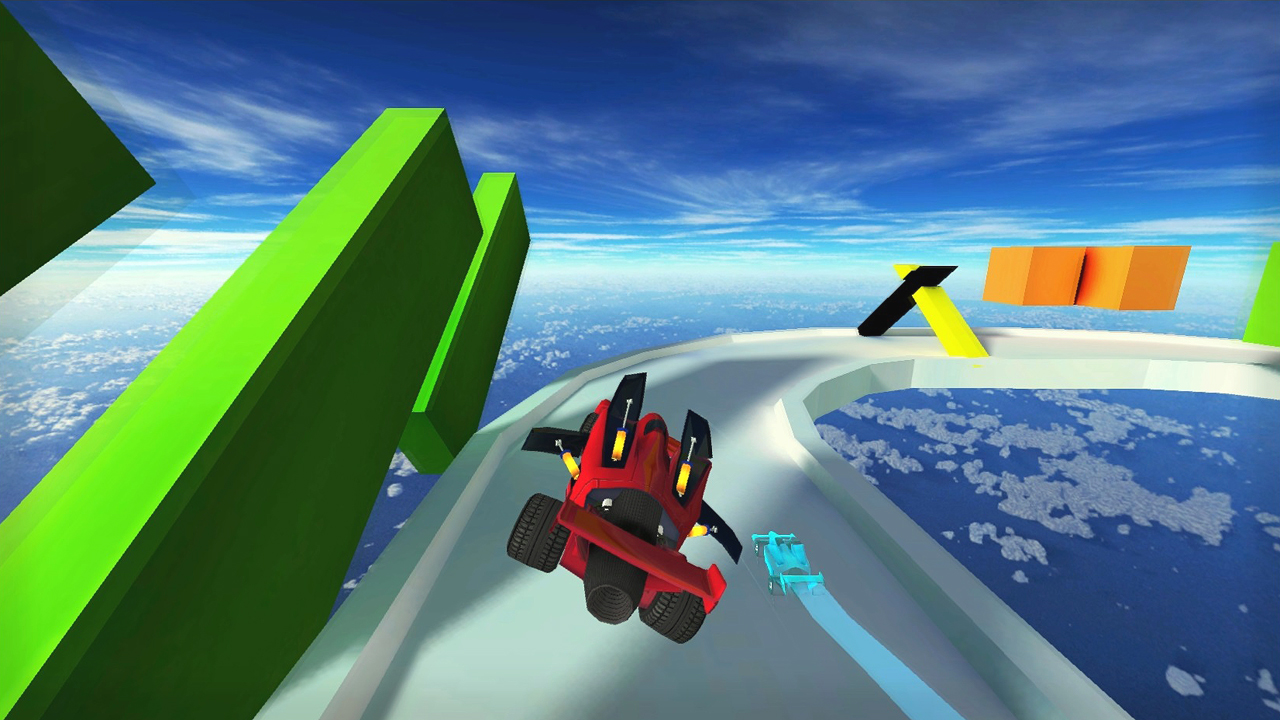 In the world of video games, there are those that exist to be easy fun and others that seek purely to destroy the player. Jet Car Stunts falls completely into the latter category. The goal is simple – race a jet-fueled car through stages as quickly as possible. Unfortunately, it does everything possible to make that a purposeful exercise in frustration. Only players who love testing their mettle will enjoy Jet Car Stunts’ wicked sense of unfairness.

The mechanics of the game are incredibly easy to grasp. Players are issued a lovely little racecar with some unique features. Instead of being tethered to the ground, the car comes issued with a jet engine. This means that, given the right jump, you can actually fly the car around with some degree of control. Well, you can do so as long as the jet engine has fuel. It’s actually in pretty limited supply and restocks only occur at specific points along the track.

Alongside regular acceleration and jet boosts are some basic controls for “flight”. When in the air, you can slightly steer the racecar ever so slightly. Basically this grants you the ability to ascend somewhat, descend, or do ridiculous partial barrel rolls upon veering dangerously off course. That’s all there really is to Jet Car Stunts. The controls are simplistic on purpose, and it makes sense considering the game’s smartphone roots.

As with most cruelly difficult games, the real challenge comes from trying to master a simple game. It may be simple, but it offers a host of perilous courses. Even early tracks can prove treacherous until the controls are understood adequately. Many mistakes come thanks to the fact that the tracks are suspended in the sky. You can’t simply run off the track into some gravel. Nope, instead your car will plummet to its destruction, wherein you’ll spawn back at the last checkpoint. 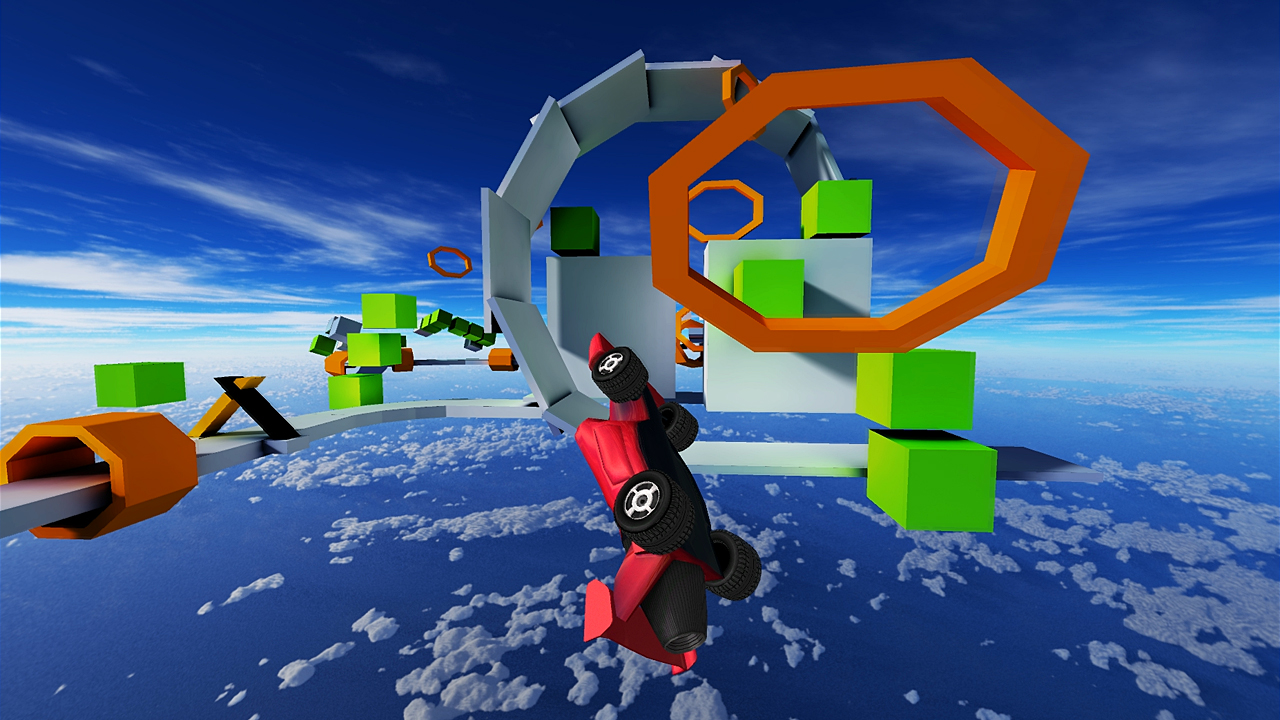 The car is also incredibly fragile. Racing headfirst into a pylon means certain crushing doom. So basically, you can’t drive too fast lest you fly off the edge or smack into something. That’s ironic considering the fact that Jet Car Stunts relies heavily on beating the clock. Can you become skilled enough to speedily meander through increasingly ridiculous stages? Yes, but it’s going to take a damn long time and a lot of patience.

There are three gameplay modes: Platforming, Time Trial, and Collector. Platforming stages are certainly interesting, and deal with carefully timing jet boosts to make your way across dangerous tracks. You can choose to play these against the ghosts of other players. This asynchronous multiplayer is the only multiplayer to be found. Time Trial is, well, a time trial mode with gold, silver, and bronze metals. Collector tasks players with grabbing a certain amount of stars loitered about the stage.

It might not seem like it, but Collector is by far the hardest gameplay mode available. Some stars are incredibly easy to collect as they lie directly on the track. Others, however, are perched up above you. Many seem impossible to collect. With a little (or a lot) of ingenuity, all can be obtained. There’s only eight Collector tracks though in comparison to many more for the other game modes. Even so, the experience still feels very one-note. 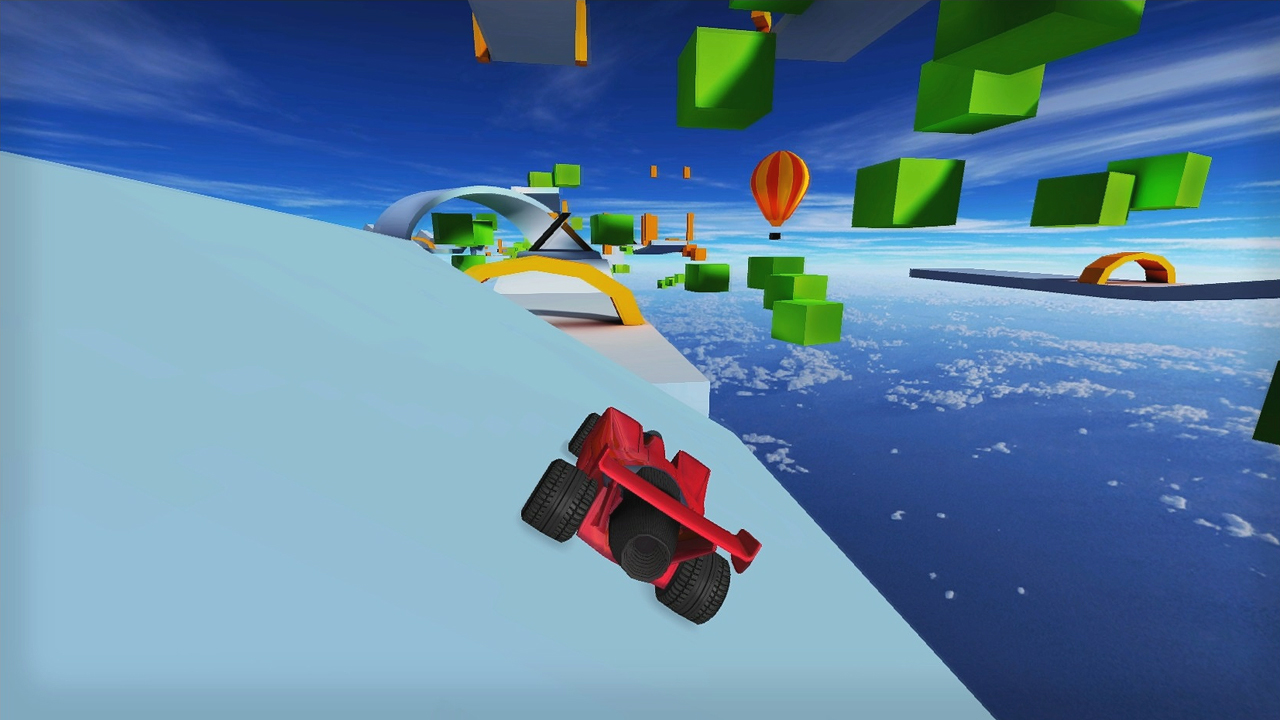 Some of the best purposefully difficult games become addictive thanks to precise controls and cruel – yet intelligent – design. Jet Car Stunts is difficult, but not purely based on its design. The controls are just freewheeling enough to cause some unfair failures. The in-game physics also go bonkers at times, causing the car and camera to flail wildly about. It’s funny the first few times but can become dizzying during longer gameplay sessions. Every so often there are also glitches which cause all graphics to become black and white, which is quite odd indeed.

The player trolling gameplay is effective despite all this, but there is still much to be desired. It would be great to see the gameplay evolve beyond one basic premise, or at least offer a handful more smartly-designed courses to keep players interested. Even the stages feel incredibly samey after a while thanks to an unchanging aesthetic. As it stands, the experience will likely grow tiring for most after a few hours. Then again, the game is several years old and was designed for mobile devices, so it was probably never designed with the long term in mind. 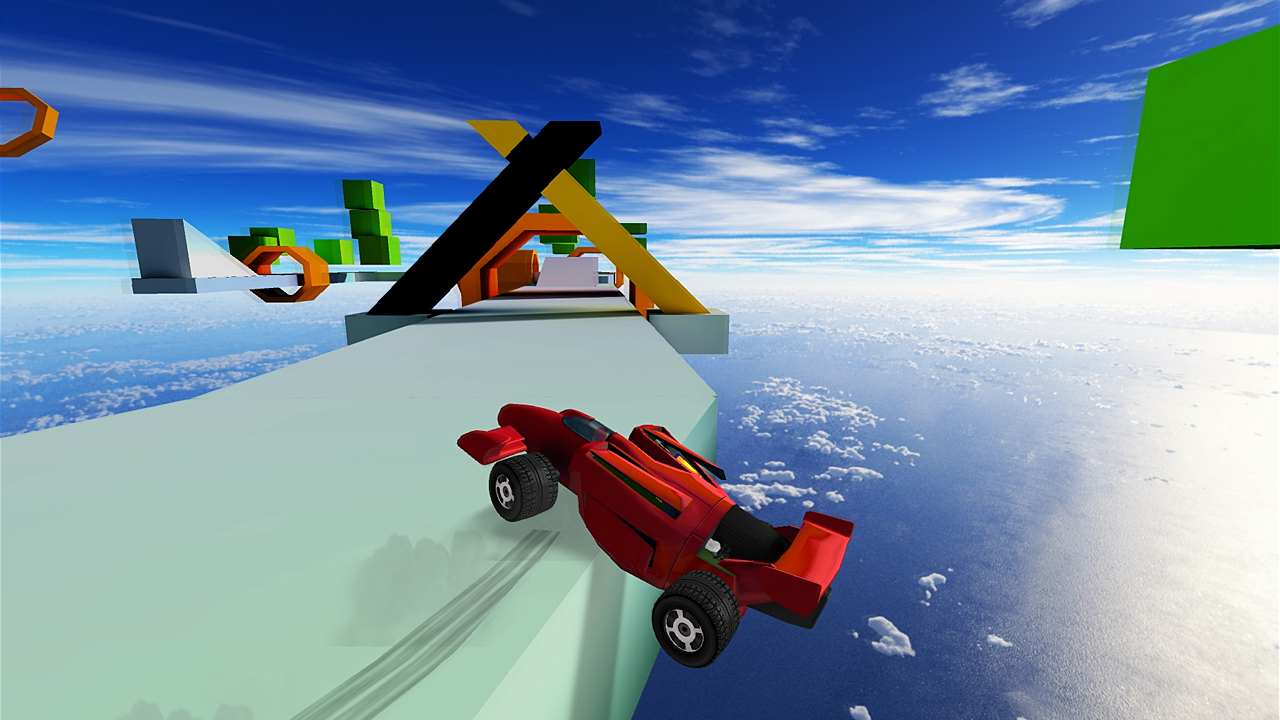 Jet Car Stunts was well-liked upon its original launch in 2009, and that’s thanks to the fact that it offered far more than many smartphone games at the time. Tough racetracks and quick losses lend themselves very well to short bursts of gameplay, but in a world where Jet Car Stunts 2 exists, alongside other, more polished challenging games, it simply doesn’t hold up.