Every now and then, the so-called “Indie Movement” will spit out a game that feels special. These games take us aback; they show us that video games don’t have to have next-generation pore physics and high resolution flying garbage to be awesome. Super Meat Boy, Braid, Fez, Minecraft, Hotline Miami, Limbo, Bastion, Guacamelee!…the list goes on. Creativity and charm oozes throughout every inch of these indie mega-hits, often making popular copy-and-paste AAA military shooters look as stale as stale can be. This exclusive club now has a new member: Capybara Games’ Super Time Force.

Super Time Force‘s story begins when a scientist discovers time travel, thus changing the world forever. Players take the role of the eponymous Super Time Force, led by Commander Repeatski, a future version of the aforementioned scientist. While it initially appears that the Super Time Force wants to save the world from a time-travel induced apocalypse, the game revolves more around using time to accomplish ridiculous tasks for Repeatski. Perhaps the team’s spaceship needs better internet to download a cat video sent by the President, or maybe he needs a cooler, less baby-like version of his child from the future. The Super Time Force travels through time to make things more awesome, causing chaos along the way. It’s stupid, it’s ridiculous, and it’s consistently hysterical. 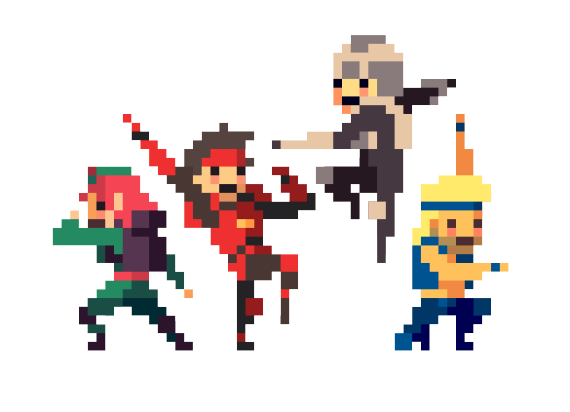 The Super Time Force is made up of a number of unique characters, each with a dumb name to call their own. Every character has a signature standard attack, activated by pushing the X button, and a signature charged attack, activated by holding the X button. The three characters you start with each have their own strengths and weaknesses, allowing players to grow accustomed to the game’s mechanics without feeling overwhelmed. Jean Rambois, the small arms expert, has a machine gun that either fires puny pellets in a straight line or unleashes a massive, three-pronged barrage of larger bullets. Aimy McKillin (oh, it gets better) is the Super Time Force’s resident sniper, with bullets that bounce off of walls and a charged attack that can blast through lines of enemies. Let’s not forget Shieldy Blockerson (no, no, it gets even better), whose shield can stop essentially everything that it comes in contact with; good ol’ Shieldy can also create a circular bubble force field that will save countless lives. These three winners are just the tip of the iceberg, with Zackasaurus and Dolphin Lundgren being two more of the roughly one dozen Super Time Force members.

As the names of some of the characters indicate, Super Time Force‘s humor is so dumb it’s hilarious. Commander Repeatski’s continuous efforts to be the “cool boss” lead him to pepper “LOL” and “K” into his mission briefings. The evil Dr. Infinity’s insistence on coming up with a new, ridiculous Super Time Force pun each time he appears (Stupid Time Dorks?) never gets old. Our lovable heroes complete ignorance is always hysterical. There are feces-beasts, meme jokes, nerd insults, and more scattered throughout the game’s campaign. Needless to say, you will laugh a lot during your time with Super Time Force.

The story is completely non-linear, which works brilliantly within the context of a game focused on time-travel. After completing the initial three levels, players have the option to travel between six different time periods. Stuck on the second level of the year 3072? Fine, travel to 1,000,000 BC and try your luck against the dinosaurs. One of the most mysterious gaming phenomena is beating a previously unconquerable level after an extended break. Journeying outside of one’s cavernous basement to devour a Hot Pocket, wash it down with Mountain Dew, and grab a bag of Cheetos can often mean the difference between victory and defeat. Super Time Force builds these breaks into the game itself. Removing linearity from a level-based game also removes all of the frustration that comes from being stuck. Super Time Force is certainly not the first game to employ this mechanic, but being able to jump around the game removes the potential for the chaotic gameplay to become overwhelming.

Speaking of the gameplay, there are three words that best describe the Super Time Force experience: Mother of God. Anyone who has watched one of the game’s numerous trailers knows that Super Time Force is complete and utter chaos. Each side-scrolling level contains countless enemies, each possessing the ability to defeat your character with a single hit. You will die again, and again, and again. Don’t you worry, reader of reviews, there is a way to capitalize on all of these quick demises. Pressing the B-button cues a rewinding mechanism, meaning that you can restart any sequence from any point (other than the exact moment of  a character’s death). Sound like a number of other games? It gets better; when the timeline is rewound, players have the ability to replay the previous moments with any character. While this would be an incredible mechanic on its own, Capybara did not stop there. Beginning a new timeline, with a new character, does not erase previous timelines. Instead, players have the ability to fight alongside ghosts of their former selves. Preventing the death of a previously-used character grants the current character the opportunity to assimilate the saved character’s ghost into themselves, thus giving them more firepower and an extra hit point. The result is a frantic, yet completely manageable, barrage of bullets, death, explosions, and awesome.

Players are given sixty seconds of real time to reach the end of a level or beat a given world’s boss. Being that the majority of levels require more than sixty seconds of traversal, thirty “Time Outs” can be used at any time to pause and rewind the timeline. This limited number of Time Outs means that every decision has a consequence. Do you spend time defeating every enemy, knowing that you will only have five seconds to defeat the mini-boss at the end of the level? Should you speed-run through the stage to conserve your Time Outs, leaving you vulnerable to enemy attacks? Collecting Shards (which allow players to slow down time), Glorbs (which grant players an extra Time Out), and ten second clock-extensions alter the timeline, meaning that more strategic options come into play during every level. Always difficult and challenging, Super Time Force requires a great deal of trial and error, yet it is never frustrating. Also of note is the ability to watch (and easily save) a run in real time after beating a level, as seeing a run without rewinds is always entertaining. It is absolutely an action-platformer, but the overarching time constraints make it feel like a puzzle-platformer at times.

Super Time Force controls and runs exceptionally well. Input lag is non-existent, meaning that every death feels like it is the player’s fault. Every gamer despises those moments of game-induced death, times where he or she did everything right, yet still perished. These dreadful moments of rage-inducing cheapness simply never occur in Super Time Force. The jumping is somewhere between floaty and tight, yet it never feels like your character is out of control. Landing on a specific section of a platform requires little thinking or planning, as the game’s physics always seem to make perfect sense. The framerate is rock solid throughout the entire campaign, with the game running as smoothly as a modern platformer should. While the standard mechanic of jumping down ledges by pressing the down and A buttons at the same time is generally absent from Super Time Force, controlling a character’s in-air flight path is so intuitive and responsive that this is irrelevant. Every technical aspect of the game is set up so that players have the ability to succeed.

Good Lord, this game looks awesome. In 2012, Fez showed us how well-made modern pixel-art can look incredible, with each pixel feeling perfectly placed.  Take this same motif, infuse it with a kilo of cocaine, and you have Super Time Force. Every inch of the world has purpose, using the countless pixels to perfectly illustrate each time period. There is never any question what a given object is, as the art-design is consistently spot on. Super Time Force feels like the modern equivalent of the coolest game in the old arcade. Never before have tiny squares seemed so bad-ass.

One of the problems with downloadable indie titles is replayability; indie games that are not inherently score-based can often become three-hour “one-and-done” experiences. Super Time Force does not fall into this category, as it is one of the most replayable platformers in recent memory. The game does not end after completing the six to eight hour campaign, as there is much more to experience after the story’s completion. The endless Time Out choices and difficult collectibles allow players to experience each level in a multitude of different ways. Each level has a number of medals that can be earned, whether for collecting Glorbs, Shards, or other secret collectibles. It is all but impossible to collect every item in one run, as secret areas can be easily missed without careful attention. Collecting every medal in one category unlocks new characters, giving players an added incentive to keep playing. Add Super Hardcore Mode, in which each character can only die once, and an intuitive leaderboard system based on game completion and it’s easy to see Super Time Force becoming a thirty to forty hour game.

The best game on the Xbox One is not a heavily mo-capped Roman battle simulator; it’s not car porn, nor is it a parkour-filled first-person shooter. No, the flagship title on Microsoft’s shiny new console is a pixelated, 2D bullet hell game, combining shades of Contra and Braid to make something incredibly special. There is a reason why “fun and games” is a phrase, as the two often go hand-in-hand. Not only is Super Time Force an incredibly deep, challenging game, but it has arguably the greatest “fun-factor” of any 2014 title. This quirky, spastic shooter has rightfully earned its seat at the Indie Game Round Table.