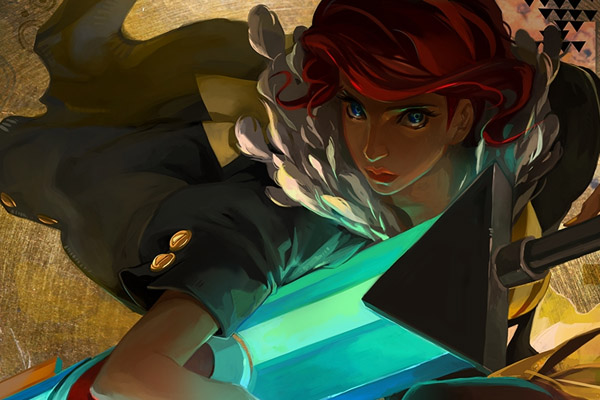 “We all become one.” While its unlikely that Supergiant Games and composer Darren Korb intended the definitive song from Transistor‘s superb soundtrack to perfectly explain the game, nothing could be truer. This partial lyric illustrates the game’s greatest faults and its unmistakable beauty: Transistor as a whole is greater than the sum of its parts. Aspects of the game can seem under-explained, complicated, or downright bizarre until they all become one. When viewed as a single entity, Transistor is a challenging, creative, touching title that does the indie community proud.

Set in the gorgeous, hand-painted city of Cloudbank, Transistor tells a perplexing, yet simple story about a woman named Red and her trusty sword, the Transistor. The elevator pitch is easily understandable: Red finds her significant other deceased with the Transistor sticking out of his chest. Upon removing it, she then battles waves of robots, known as The Process, who have overrun her abandoned city. Oh, and the sword talks, too.When examined in more depth, Transistor is far more mysterious than this, potentially spawning a genuine accessibility issue. The Process is the brain child of the Camerata, a mysterious group of powerful Cloudbank citizens who essentially control the entire city. The Camerata seeks the Transistor for God knows why, and your ten-hour long mystery branches off from here. This is mostly told through vague dialogue between the Transistor and Red, who doesn’t respond due to her voice’s disappearance. In classic “blink and you’ll miss it” fashion, players find this information out roughly within the game’s first ten minutes.

If this sounds completely confusing, that’s because it is. Transistor’s vague cyberpunk narrative is explained through subtle dialogue pieces and easily-missed computer systems. It’s entirely possible to finish the game without understanding a single thing that happened, which seems like the backdrop of a disaster. This could not be farther from the truth, as Transistor‘s narrative is almost undeniably beautiful. Players who search every alleyway and take the time to read each of the optional back-story pieces will be rewarded with a gripping mystery that will tug at each of their heartstrings. The final ten minutes of the game are absolutely phenomenal; Transistor has one of 2014’s most touching video game conclusion.

Let’s not forget to give credit to the artists who have crafted an absolutely exquisite looking game. The hand-painted environments are colorful, unique, and alluring. Each section of Cloudbank is more beautiful than the last, and each art-based cutscene is more detailed than its predecessor. While not as visually striking as something like Ubisoft’s watercolor wonder Child of Light, Transistor is absolutely a sight to behold.

Aside from its outstanding story and overwhelmingly stunning art-design, Transistor‘s deeply strategic action-RPG gameplay is the highlight of its experience. Each ability, known as a function (mapped to one of the four face buttons), can be executed in real-time or during a time-stopping turn. In real-time, there is either a small cool-down timer or some form of recoil that prevents players from spamming functions excessively. The turn system gives players an action bar and essentially tells them to go nuts. Each function takes up a certain amount of the action bar, meaning that proper planning is essential. The smartest players will execute maneuvers in an order than maximizes both the amount of functions used and the amount of damage dealt. Combining these two combat mechanics makes Transistor extremely deep, as its strategies are nearly as numerous as its foes.

Boasting brilliant enemy design, Transistor does a great job of making every battle feel somewhat fresh. Each enemy is randomly named by the Transistor; “Young Lady,” “Fetch,” and “Jerk” highlight the various members of The Process. Though each enemy is white with small black and red accents, no two foes look alike. Fetch is a robot dog, while the Young Lady looks like a snowflake set on top of a classically attractive female form. While there are only roughly ten different enemies, the countless combinations they can appear in changes the strategy of each encounter. A battle against a pair of easily-beaten Snapshots can be made infinitely more challenging if the playing field is scattered with health-regenerating Weeds. Two massive Jerks are fairly simple to beat, but the fight becomes daunting when they are in a small area with a Fetch or two. Transistor forces you to use your brain; playing through the game on mental autopilot is a great way to have a poor experience.

Essentially applying sandbox mechanics to its function assignment system, Transistor grants players oodles of combat options. The functions are all entirely different from one another, with the only common theme being a base damage statistic — although not every function actually does direct damage. There are three different function assignment slots: passive, which is the equivalent of a perk in a multiplayer shooter, active, which allows the function to be mapped to a specific face button, and upgrade, which alters a separate active function. Listing the effects of various abilities would merely undermine Transistor‘s incredible experimentation potential, as trying each function in each slot is actually one of the best parts of the game.

Not only does Transistor boast a touching narrative and engaging gameplay, but it improves upon some of gaming’s most tiresome mechanical tropes. Doing away with the often obnoxious collectible system permeating our linear games, Transistor‘s back-story is revealed through its function system. Each ability corresponds to a specific missing Cloudbank citizen, with that person’s story containing three detailed paragraphs unlocked through a function being used in each of the three slots. Generally explaining the person’s history, their association with the Camerata, and the circumstances behind their death, these factual tidbits provide context for the potentially confusing story. Not only does this encourage loadout discovery, but this allows players to avoid the all too common frustration of missing random notes placed in obscure corners.

While the game can be beaten without any sort of grinding, Transistor does give the player the opportunity to increase his or her level in a separate section of the world. At certain points in the game, “Backdoors” will appear, each of which will transport Red and the Transistor to a strange beach world with a door-filled tree highlighting the gorgeous ocean scene. Every door contains a different tiered challenge theme, with mini-games focusing on speed, planning, survival, and other crucial traits. Completing an individual tier grants the player experience points, but this is completely optional. The game progresses in such a way that backtracking to fight previous enemies is impossible, meaning that those who wish to fly through the story are able to do so without the risk of getting stuck due to a lack of level-grinding.

Gone are the standard “Easy,” “Normal,” and “Hard” modes; instead, players are able to increase or decrease their difficulty on the fly. As Red’s level increases, players are given access to combat limiters which allow them to pick and choose the aspects of combat they wish to make more difficult. Perhaps you find enemy-produced cells to be too few and far between, making battles end too quickly; simply increase the number of cells produced upon eliminating an enemy for a small experience boost. Maybe you find that the sheer amount of function options makes the game too easy; eliminate six memory slots in order to increase the challenge and the experience-based reward. Limiters can be stacked according to the player’s preference, meaning that everyone’s difficulty is unique to them. Furthermore, when Red’s health hits zero, she loses access to a specific function. Rather than making the player start over from square again and again, Transistor gets more difficult as one fails. It’s a novel take on a well-worn system, and it should serve as an example of how to customize the gameplay experience towards each specific player.

So what is wrong with Transistor? Although it’s very much the “real deal,” it’s a game that will be seen as largely inaccessible to the casual player. Those looking to try out their first indie or those who are not part of the “hardcore” contingent will likely see Transistor as either boring or confusing. During an early cutscene, it’s rather easy to miss one of its most crucial narrative details as the events leading to Red’s situation are shown through paintings that appear on the screen for no more than fifteen seconds. The game’s instructions are rather vague, as players will likely have to fool around a bit in order to fully understand the game. There’s definitely no hand-holding here; Transistor simply drops you into the game and sends you on your way. Those who pay close attention and experiment will find Transistor to be an incredible experience, but those who don’t will find it to be somewhat of a disappointment. It’s also a game that absolutely must be finished to fully appreciate. If you have no intention of seeing its ending, it’s certainly not worth the price of admission.

Though it can be vague, strange, and inaccessible, Transistor is one of the strongest games of 2014 so far. Its unique take on standard video game practices make it feel undoubtedly fresh. With strong combat, great enemy design, and a lovely story, Transistor will reward those who put in the time. Its parts are solid, but as a whole, it’s a wonderfully sound, beautiful RPG that will stick with players for a considerable amount of time. More like an effort-intensive relationship than an adrenaline-inducing one-night-stand, Transistor is a must-play for those who are committed to its cause. However, those who are looking for an instantly-gripping cheap thrill should look elsewhere as this is a game that must be seen through to the very last second.