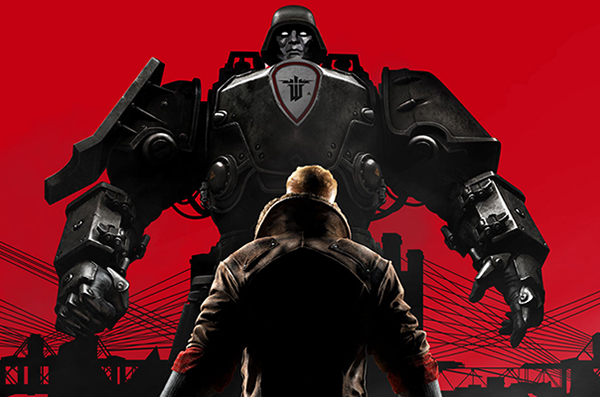 The year is 1946, and the Fuhrer is dead. There’s no slowing down the Nazi regime from pushing through Allied forces, and despite one hell of a fight, they’re no match for the world’s most advanced technology. The Nazis are taking the war. Naturally, and in a typical 80’s action flick manner, brick-wall hero B. J. Blazkowicz isn’t in the business of bowing to the Third Reich, and decides to assault their base of operations despite impossible odds. There’s a turret involved, some bombastic progress and a handful of mini-victories, but enough shrapnel in the face will drive even the grittiest, manliest, most absolute Nazi-killin’ machine into a 14 year mental slumber. And so it did.

From the very onset of Wolfenstein: The New Order, it’s clear that Blazkowicz is, without a semblance of doubt, a 90’s video game character. There’s no painful recollection, insightful realization or character moment in which an emotional roller coaster rushes through the story. There’s only a grunt, and some grungy whispers about destroying Nazis. Once the prologue runs its course, things pick up in a mental institution. You need to escape, and that’s essentially the long and short of your objective. Of course, walking out of detention unscathed is a breeze for a man who’s coma hasn’t deteriorated a sliver of his physical condition, and in a seemingly stronger than every fashion — and much like the classic titles of yesteryear would have it — there’s no name taking as you reach the bits-and-pieces of resistance that remain in existence. 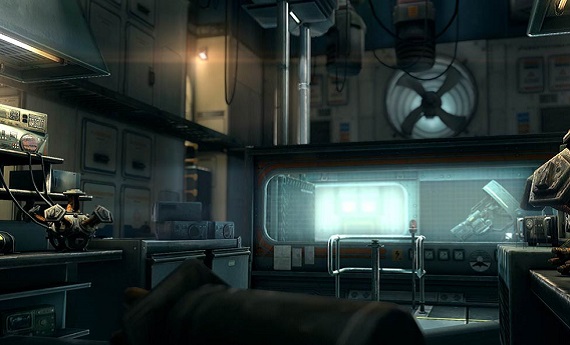 With much of the game revolving around the killing of Nazis, developer MachineGames patched the road less traveled, offering various playstyles that can be employed without consequence. Each approach, while different enough from another to feel authentic to the experience, isn’t restrictive in the least. You’re never penalized for teetering between options, and it mostly boils down to personal taste. Stealth, for example, will have you speed-crouching behind unsuspecting Nazis, tossing throwing knives and taking a back seat to much of the explosive action. On the other hand, the assault approach is appropriately hazardous, with plenty splodin’ body parts and dual wielded assault rifles to liven the mix.

The shooting mechanics are, for better or worse, simple. Weapons have weight, sound unrealistically violent, and are as satisfying to shoot as they are to carry — and you’ll be carrying them all, as there’s no loadout limitations in Wolfenstein. Mixing and matching is encouraged by enemy variety, which ranges from massive, hellish robots that demand a different — somewhat tactical — approach, to hordes of bullet-sponge Nazis whose meat falls from the bone like an SS chicken wing. While taking the stealthy approach is often the most attractive option — and also the one I opted for in most cases — it’s also the trickiest to commit to. I found that there were too few moments in which stealth was MachineGames’ intended form of play, and it was often wiser, faster and more enjoyable to kick a door down and blow Nazis into a bloody mist of guts and triumph with a rocket.

There’s ample reason to stay focused and keep to your choice of guns, though. Perks, Wolfenstein’s primary source of character progression, are earned by completing objectives in any order of the various playstyles. These upgrades will permanently enhance Blazkowicz, improving things such as magazine capacity and headshot strength. You could, in your self-tailored experience, never amount a single perk without so much as noticing the difference, but the requirements are rarely more complex than ‘kill so and so amount of so and so,’ making them both useful and easy to earn. 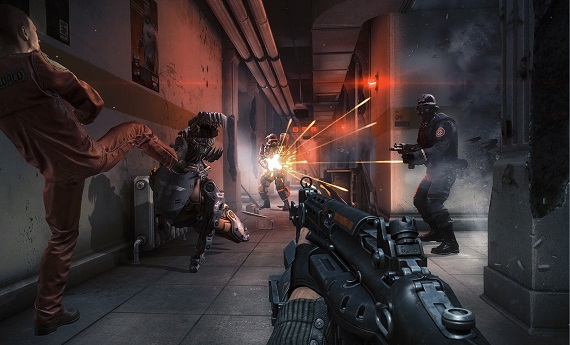 It’s clear that Wolfenstein isn’t about dealing with Blazkowicz’ breakdown and subsequent struggle. There’s a grittier approach in its classic folds, and despite featuring many subtle — and less than so — mechanics of modern shooters, there’s very much an oldschool, fist-shaped heart at its core, chock-full of health and armor kits, over-the-top action and a narrative that could easily accommodate the acting chops of Dolph Lundgren. It’s not just its near-lack of a regenerative health system that keeps Wolfenstein from shaping into a Call of Duty clone, however. It’s the story that, in the end, positions the game a slice above its adversaries.

Where it succeeds beyond the basest point is in its execution of characters, particularly Blazkowicz himself, who offers no more depth than porta potty but somehow manages to shine as leading man. Humor peppers the script, and genuine moments of struggle keep the serious tone of a world ruled by Nazis in check. While most characters will slip in and out of the story, collapsing much of their weight on the outcome, there’s a sense of placement that trounces much of the cheesiness, resulting in a game that does its lack of multiplayer proud, as it’s clear where extra time was invested.

In its tradition of remaining true to form, Wolfenstein doesn’t baby players, either. Despite taking place in a series of narrow hallways and closed arenas, there’s occasionally a befuddling lack of direction. Indeed, there’s always a reticle to follow, and there’s always a place on the map which will shift the story forward, but it’s just as easy to get lost in its dark, bloody corridors, heightening the tension and leaving much of the exploration feeling at home with the horror genre. Likewise, there’s a plethora of secret pathways and rooms, encouraging drifting from the course, and offering an overwhelming amount of collectibles that unlock various goodies on the main menu. 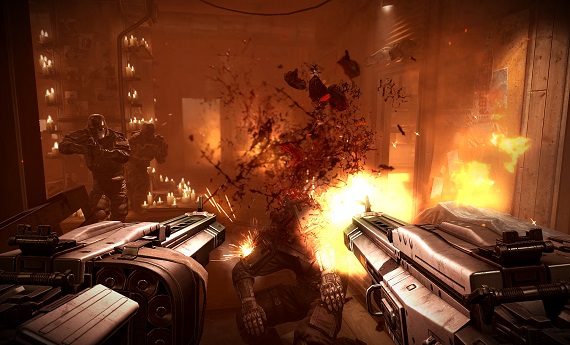 Visually, Wolfenstein is dark and dreary. It’s clear, from the banners and prison-like constructions that something’s not quite Reich with the world. There’s plenty of grey in the palette, and while the prettiness of it all is boasted admirably, much of it can look unrefined at times. There are other missed opportunities that hold Wolfenstein from true greatness, too. These issues become more apparent as you progress through the story, and while there’s certainly nothing wrong with it on any fundamental level, much of the late game’s enjoyability is heavily determined by your love of shooters.

At some point in the 15 or so hour campaign — somewhere between your first perk and some striking set pieces — the introduction of newness halts, and everything dwindles back to formula. It’s then that, regardless of its best merits, Wolfenstein begins to feel like just another FPS. While the experience itself doesn’t stale in most regards, it simply begins to pander, making its simplicity a slice more obvious. Thankfully, there’s enough variety in both the sci-fi-esque aspects — riddled with robot dogs, space travel and moon-base operations — and the more grounded, shotgun to the head gameplay.

But perhaps the most disappointing missed opportunity happens in the first act of the game, where you’re offered a choice that seemingly determines the outcome of certain events. While its inclusion is appreciated, and the altered collectibles that’ll appear throughout the game encourage replay, there’s something cheap about its overall effect on the experience. There’s not much of a difference, and the only folks that’ll willingly jump back in are diehard fans of the genre. 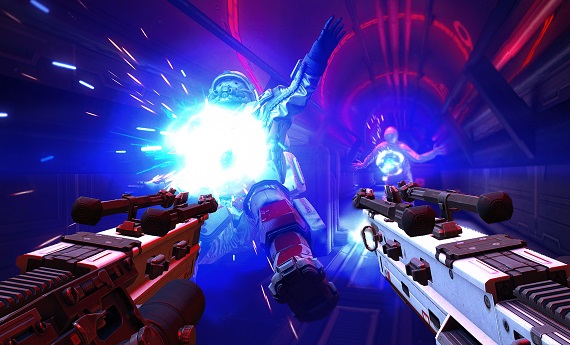 “We in the killin’ Nazi business. And cousin, business is a-boomin’.” Those words, spoken by Lt. Aldo Raine in Inglorious Bastards, summarize the Wolfenstein experience in a nutshell — a grossly bloody, partially dismembered, nutshell. Although hints of humanity permeate the story often enough to showcase a cast of somewhat likable characters, at its core, the primary goal is slaughtering Nazis. While on paper it’s color-by-number mechanics, diluted story and minor lack of polish here and there may seem like red flags, Wolfenstein: The New Order is also easily the most enjoyable shooter in years, boasting a tongue-in-cheek dose of ’80s B-movie action that easily topples the previous entry in the series. There’s a lengthy campaign, some genuinely impressive set pieces and, most importantly, incredibly fun gameplay. And that’s something I did Nazi coming.