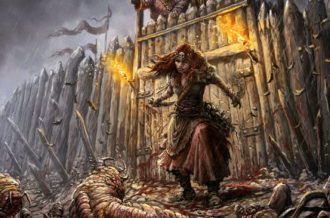 Gord Brings Out the Darker Side of Slavic Folklore Next Year

Disney will be adding the first round of Marvel Super Heroes to Disney Infinity 2.0 this Fall starting with The Avengers Play Set.  To celebrate the announcement, Disney has released a brand new trailer showcasing the six super heroes and the Play Set’s story.

The Starter Pack comes with Iron Man, Thor and Black Widow with Hawkeye, Hulk and Captain America available separately.  These six characters are just the beginning with Disney promising over 20 Marvel Super Heroes to be released after the launch of Disney Infinity 2.0.

In the Play Set, Loki is up to no good, and has unleashed the Ice Giants on Earth.  The Avengers must assemble in New York City to defeat Loki and end the Ice Giant’s threat to Earth.

In addition to the Play Set story, all of the items, weapons, vehicles and locations from the Marvel Universe can be accessed and played with in the ToyBox mode.  The content from the original Disney Infinity will be compatible with Disney Infinity 2.0.