We open on an old man telling the story of the world’s creation while looking over an old scroll. He tells of the Intoners, five goddesses who descended from the heavens onto a turbulent world, bringing peace through the power of their song. It’s a fairly standard expository scene, though very well-executed. The pictures on the scroll are beautifully animated using a cel-shaded ink-on-paper effect, and the story, though a little generic, has a certain fairy tale charm to it. And then the narrator gets stabbed through the goddamn chest and bleeds all over the scroll, because fuck JRPG tropes. This is Drakengard.

A beautiful blonde woman clad in white stands at the other end of the sword. She is Zero, the original intoner, and she’s hell-bent on killing her five conveniently-numbered sisters. Assisting her is Michael, a wise dragon. Unfortunately, her sister One has a dragon of her own, one that she’s corrupted into a powerful demon. Zero is defeated, losing her arm in the process, and Michael is killed. After a year’s recuperation she sets out once again on her murderous rampage, this time aided by Mikhail, the reincarnation of Michael. The juvenile dragon is considerably less wise than his predecessor, but he can still spit fire and it’s hard to argue with results like that.

Drakengard has always been one half beat-em-up and one half Ace Combat-style shooting. In previous games, the ground-based combat was not great. The controls were sluggish, and on the whole encounters felt too slow. Drakengard 3 definitely fixes that problem, delivering a fast, acrobatic spectacle fighter in the vein of Devil May Cry and Bayonetta. While not nearly as precise as its contemporaries (the camera in particular needs a lot of work) it’s quite fast-paced and fun in its own right, well above the standard set by most Action-RPGs. You can switch between four weapons on the fly, each of which handles quite differently, and the unlockable variations of each weapon all use different combo trees and animation timing in addition to different stats.

There’s a great deal of variety in the enemies too, and the developers throw them at you in interesting mixes, creating a solid difficulty curve.  Beyond the campaign missions there are side-quests, most of which involve beating a large number of enemies in a short amount of time in order to collect various mcguffins. The side-quests feel pretty samey, and the timed missions can get a little frustrating when they require any kind of precise platforming or fast combos with inherently slow weapons, but as optional diversions they’re alright. On the other hand, you have the Survival gauntlets, which pit you against strings of standard enemies and minibosses. You’re not allowed to use healing items or support characters, so these missions provide a meaty challenge (and suitably meaty rewards). Of all the side quests, these are the most fun and challenging.

Dragon-back combat, meanwhile, has been oddly sidelined. Usually, you only get to ride on Mikhail once or twice per chapter. You’d think that this mode would have been emphasized, considering that Access Games has produced several Ace Combat titles, but even when you do get to ride the dragon, it feels pretty tame.  Levels where you have free control of Mikhail involve a lot of locked-on circle-strafing, whereas the more linear “shooting gallery” stages make the game feel like a dumbed-down Rez knockoff. In a series first, you can actually land your dragon and run around bathing hordes of tiny soldiers in flame, but these segments feel pretty underwhelming, and lack challenge compared to the rest of the game. You fight all of the game’s main bosses as a dragon, and while the bosses have cool designs and interesting patterns, they too feel a little on the easy side. I suppose the dragon levels do a good job of making you feel empowered, but they mark the low-points of an otherwise solid action game. 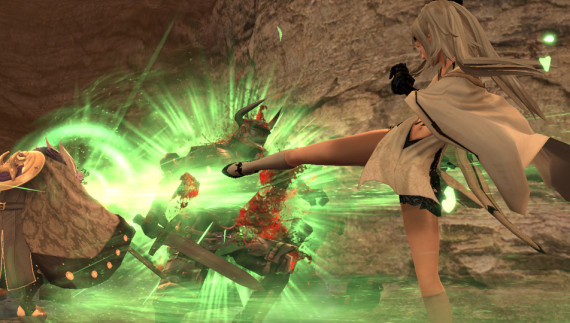 The Drakengard series has never been particularly enamored with traditional story trappings like happy endings or “good guys” in general. Its protagonists and supporting cast all sit in some kind of moral grey area, driven by ambition and selfish needs rather than any sort of lofty goal or ideal, and they often leave the world worse-off than they found it. The games tell dark, compelling, largely serious stories. In that sense, Drakengard 3 is a bit of a departure.

While the first two games in the series are close in tone to the works of George RR Martin, the third prefers the company of Quentin Tarantino and Suda 51. This game is bloody, vulgar, and violent, sure, but at its core, the game is a comedy, and a remarkably funny one at that. Perhaps that’s the influence of Access games, also responsible for the cult hit Deadly Premonition. There’s a bit of off-putting toilet humour at the outset, but it quickly gives way to clever plays on words, cutting jabs at RPG tropes, and hilarious dialogue.

It’s the weird, amoral characters that make Drakengard 3 so delightful. Obviously, Zero has to be a bit of a headcase to go on this bloody campaign against her own sisters, but the disciples she meets along the way all give her a run for her money. Dito is a sadistic, psychotic monster who delights in the screams of his enemies, while Decadus is a masochistic freak who is more than happy to put up with Zero’s constant abuse. Mikhail is charmingly naïve (when he’s not pissing himself), and his constant misunderstanding make for some lighter moments in between all the raunchy stuff.

The banter between these characters throughout gameplay is positively endearing. What makes it really special, though, is the banter between enemies as you tear through their ranks. They whine to each other about being so grossly outclassed by our protagonists and trade quips and innuendo that are full of personality – even if they only have about five voices between them. Even better, the “heroes” will often respond to the soldiers, chastising them for whining so much, or saying “I can hear you, idiot” when they voice their clever strategies a little too loudly. There’s a lot of comic gold here, especially compared to the bland, repetitive one-liners you hear in similar games.

The story is an entertaining, Kill-Bill-esque revenge quest, with the intriguing conceit that we don’t know why Zero is on a killing spree. In fact, it seems like she might be the villain of the story, especially when she murders the demure, trusting Four. It makes for an interesting mystery, a compelling reason –beyond all the jokes – to follow the quest through to its bloody conclusion. You want to reach the end and see everything revealed. Except that when you get there, it isn’t, and it becomes clear that the game isn’t ending any time soon.

One of the key ideas of the Drakengard series is the concept of branching timelines (in a hidden ending of the first game the hero and his dragon are sent to modern day Tokyo, which kicks off the events of Nier), so it was a given that there would be alternate endings in the third game. However, instead of branching naturally over the course of the game depending on your actions, here the paths to the “alternate” endings just pick up after you complete the previous paths. This effectively makes a linear story out of disjointed, nonlinear pieces, which doesn’t quite work. Worse still, it means going back through slightly altered versions of previous areas, which gets super-duper tedious. 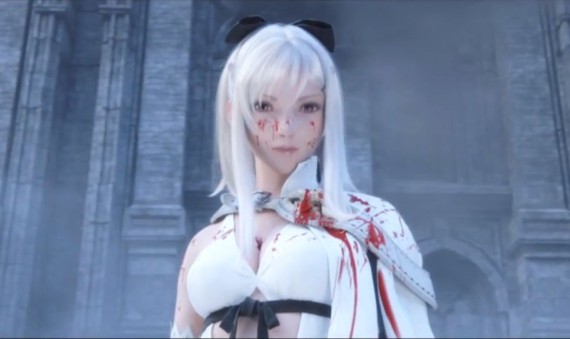 Drakengard 3 is all about contrast. With all the violence and murder it’s obviously a very hard, rough game, but it presents itself with a sense of delicate beauty. The start screen is straight out of Final Fantasy, with an artful logo on a white background set to haunting music by Nier Composer Keiichi Okabe. The character designs, too, are surprisingly elegant. Zero herself, with her white dress splattered in deep red and the torrent of obscenities that streams from her porcelain lips, is a nicely self-contained example of how the game plays with juxtaposition.

As I mentioned, the music is composed by the same man who handled Nier, so it goes without saying that the game sounds fucking incredible. The battle music is epic and bombastic, giving way in quieter fireside moments to soft, melodical compositions.  Nier had one of the best soundtracks of the last generation, and Drakengard 3 easily matches it while carving out its own identity. The voice acting, too, is surprisingly excellent for a Squenix game. They seem to have dipped into the same stable of voice actors as Aksys and Atlus use, and the resulting performances are stellar. There are a few rough points stemming from shaky translations, but overall has fantastic comedic timing, while taking on suitable weight during the darker, more dramatic moments.

Not all of the contrast in the game is good though. The character designs are universally excellent. Of coruse the Disciples and Intoners are brimming with personality, but the monster designs are for the most part very creative as well, and even the generic grunt soldiers have appealing armour design that varies based on which intoner they serve. Unfortunately, the world they populate is flat and lifeless, boring linear corridors full of ugly models and muddy textures. There are some standout set pieces with creative visual designs, like a scorching desert, a bridge covered by arching ivy, and an impressively grand cathedral, but most of these are hampered by the game’s technical ineptitude.

The engine seems designed with the assumption that the player will never, ever turn back, as objects behind you will frequently pop out before they’re out of sight. At one point, I turned back to look for a treasure chest and found that the entire level had disappeared behind me. I could simply jump off a ledge and run around in null space. The game also doesn’t handle slopes well, which is a little embarrassing when you see Zero running on thin air. It’s flat-out hysterical when you run down a hill to get away from a burrowing sand wolf, only to see it floating above your head as it chases you “underground.” None of these issues are game-breaking, thankfully, but they are quite distracting.

While the ideas behind the story are interesting, and the plot revelations are cool, Drakengard 3 takes forever to get to them, and wears itself mighty thin along the way. There’s easily enough enemy and weapon variety to keep a ten hour action title fresh, but not a 40-hour RPG. Embarrassing technical issues and weak flight gameplay only compound the problem. Ironically, an actual branching narrative could have fixed a lot of this, reframing the repetition as replay value, rather than something you need to do for a satisfying conclusion. As it stands we’re left with a very fun beat-em-up – with very funny writing – that ultimately outstays its welcome.