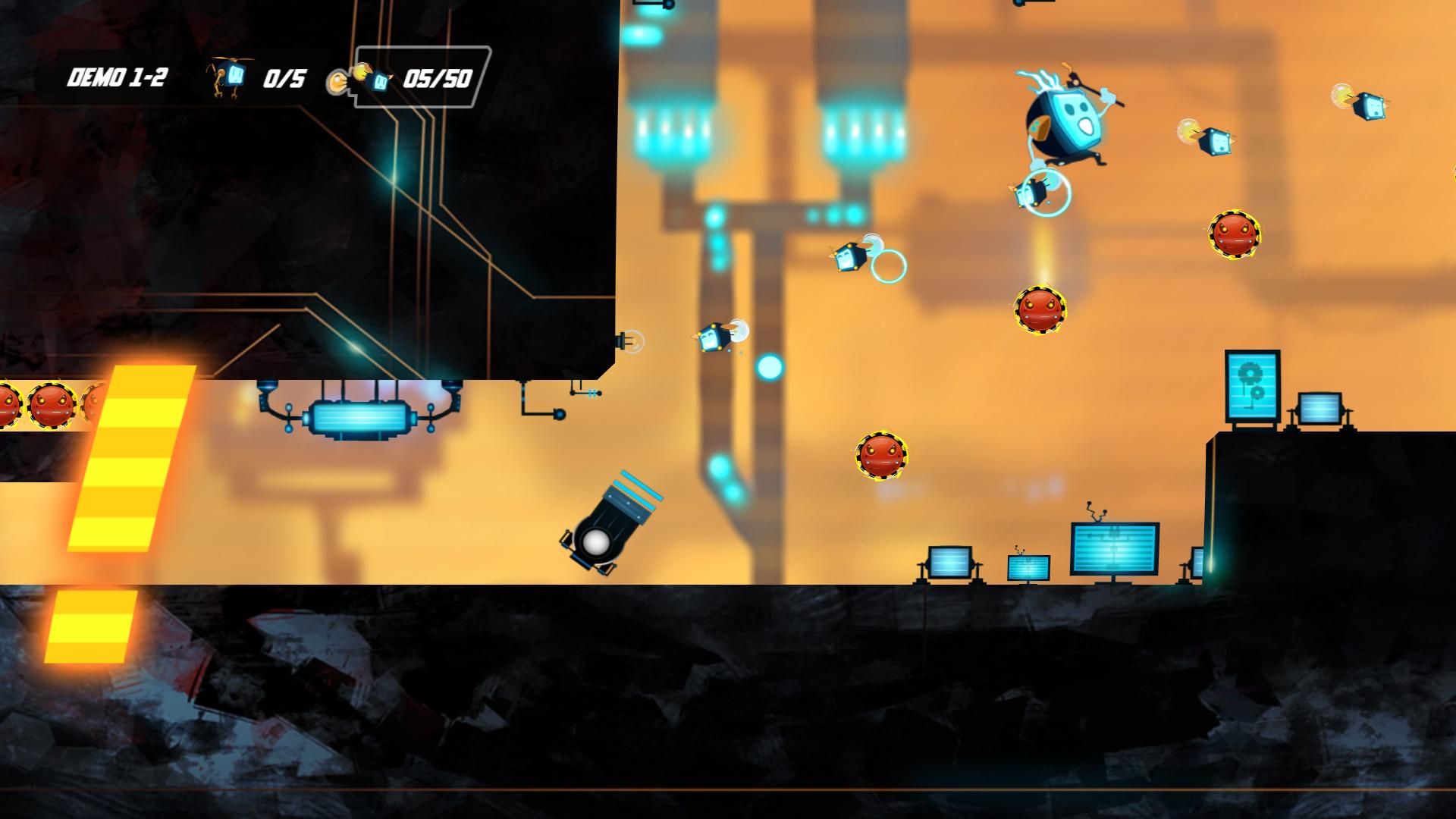 Mechanic Escape feels more like a satirical take on what a platformer should not be rather than a game built for player entertainment. Boasting unbearably floaty physics and occasionally unresponsive controls, Slak Games’ television-based title does a phenomenal job of eliciting rage. It breaks one of the cardinal rules of platforming, making every death feel like the player’s fault, so spectacularly that it seems as though it cannot possibly be a serious effort.

Mechanic Escape “tells the story” of a flame-headed television who seeks to recover thousands of his missing mini-television friends. Quotations are used in the previous sentence because the game does not actually have much in the way of a narrative. It provides context through a short cut-scene shown upon launching the game and then throws you straight into gameplay. Mechanic Escape‘s world is as bland as bland gets, with each chapter looking almost identical to the last. In fact, the only major visual difference between each of the game’s four sections is the color palette, as the environment simply changes from dark blue, to brown, to red, to purple. Sure, there are minor environmental features that provide some context, such as fire in the red “Robot Hell” chapter and moss in the brown “Electric Swamp,” but these worlds never feel any different from their predecessors.

Continuing with its “lather, lather, lather” world-building mechanic, Mechanic Escape has a brain-melting soundtrack that will inspire almost immediate muting. Each chapter has a single instrumental that plays throughout its twenty levels, every one sounding like background music to the most forgotten Chuck E. Cheese ski-ball machine. If you are interested in intracranial hemorrhaging, do yourself a favor and keep Mechanic Escape‘s soundtrack going throughout your day. If you are interested in surviving its abhorrent gameplay, simply listen to a podcast or your album of choice.

Speaking of its gameplay, Mechanic Escape commits an almost countless number of grave platforming sins. It is Super Mario Bros. after six bottles of tequila; it is Crash Bandicoot on ice. With physics that rarely make sense and a heavy reliance on one of the most obnoxious platforming tropes (being chased by an unbeatable hulking enemy), Mechanic Escape is painful to play. Never inherently broken, but always inherently flawed, the floaty physics make even the simplest tasks a chore. Sometimes your character will barely move upon pressing an arrow key, other times he will fly halfway across the level. There is no rhyme or reason to the flotation and on-ground drifting; in fact, Mechanic Escape is so floaty that it often seems as though the game is playing itself.

Each level requires absolute precision, even though Mechanic Escape never gives the player the tools necessary to be precise. With a different monster chasing the television at various points in each level, advancing in Mechanic Escape requires a perfect run every single time. There are no checkpoints in any level; dying, which happens frequently due to the game’s flawed physics, rewards the player with a trip back to the beginning of the stage. Every level is some combination of rotating blades, fire, lasers, cannons (the game’s only redeeming quality, as these largely take control away from the player), and gaps. Its “increasing difficulty” comes from introducing denser concentrations of generic garbage to float over and around, not from smart level design. Mechanic Escape‘s incredible difficulty is simply a result of an inherently flawed game, as it will kill you at a moment’s notice for reasons that are usually unclear.

Simply put, Mechanic Escape is a disaster. Its highly questionable physics and lackluster level design leave nearly every death feeling “cheap.” Perhaps it came out far too late, as it seems best suited for a profitable, quarter-sucking 1980s arcade cabinet at the local pizza joint. The complete antithesis of Super Mario Bros. and other classic platformers, Mechanic Escape  is never fun or entertaining. Boasting highly chore-like qualities, it is nowhere near worth the low price of admission.