It’s only four against thousands and the odds aren’t looking good. Left 4 Dead has been a popular online game since its release, and it’s coming to Japanese arcades soon. Taito, the company who created Space Invaders back in the day, is currently testing their new machine in select locations. It’s similar to the previous games but with new characters; there are two Japanese students, a tour guide and an American bartender. 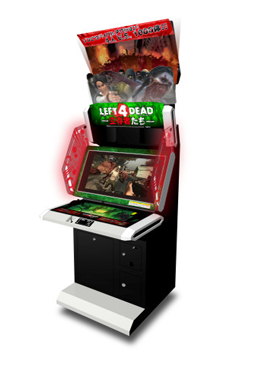 Players are scored and ranked and it will feature four player co-op gameplay which is what you want because being alone means certain death. The trailer is available to watch below, even the Wandering Witch makes an appearance. Go to the official site to poke around for more images and information– if you aren’t scared.