A Reddit user made quite the interesting discovery today in regards to Sony’s Instant Game Collection update. At the bottom of the PlayStation blog’s latest PlayStation Plus post, the author notes that both Resogun and Stick it to the Man! will be leaving the free game rotation as of June 3rd. 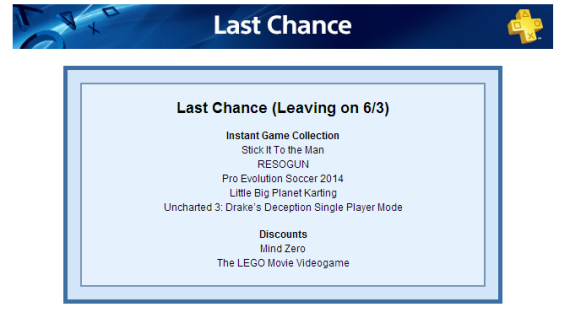 Though it was assumed that Stick it to The Man! would be a one-month offering, the announced departure of Resogun comes as somewhat of a surprise. It should be noted that Little Big Planet Karting and Uncharted 3‘s single player campaign, both on the PlayStation 3, are departing as well. This could indicate that Resogun‘s replacement will be a year-long offering, while Stick it to The Man!‘s replacement will be available for the duration of June.

With the announcement of upcoming DLC for Resogun, PlayStation Plus users (and future PS4 owners) who have yet to pick up the cylindrical shooter would be foolish not to take advantage of its current price-free status. I recently called Resogun the best game on the PlayStation 4, as its chaotic gameplay and multi-layered strategy are both addictive and exhilarating.

Speculation has already begun as to what Resogun‘s year-long replacement will be, with Knack being the most popular guess at this moment. However, since Knack is a pack-in title in Japan, the chances that another game will be free for PlayStation Plus subscribers is certainly not out of the question.