If you look back at the fresh new IPs that debuted during the seventh generation of consoles, you simply cannot overlook Assassin’s Creed. From its start as a stunning technical showcase to its current place as one of the most successful new franchises of the last generation, Ubisoft’s open-world time-traveling escapade became a legend of its genre. Expansive free-running, superb use of historical perspective, and one of the most progressive demonstrations of immersion seen in gaming yet allowed the series to achieve massive success. But with that success came a growing matter of depth. The series began introducing a number of new characters, settings and eras for its thickening and constantly climbing story, but it also began packing on some new problems that, at this moment, have yet to be addressed.

The Assassin’s Creed series is a prime example of mindless storytelling, where a lack of precision and planning could potentially lead to the overall implosion of the series’ otherwise intriguing narrative. 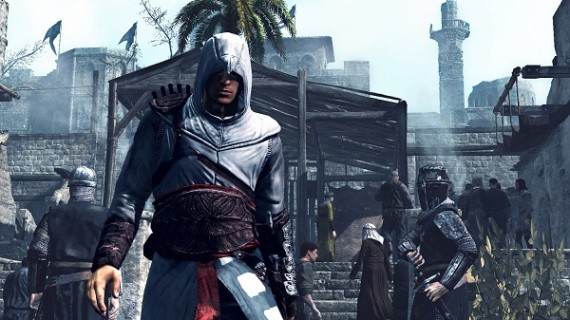 The original Assassin’s Creed was definitely a curious idea. Ubisoft took the expansive acrobatics and movement from their rebooted Prince of Persia franchise and placed them in an open-world environment. Inspired by Middle Eastern history and architecture, the original Assassin’s Creed brought players to a fully realized world, thriving with people and full of life. However, the series’ debut was an unfinished product, with terribly repetitive missions and controls that had yet to feel natural. The game also suffered from a constantly uninteresting character in Altaïr, while series regular Desmond Miles was left in the background for a majority of the game. Fortunately, the game’s sequel Assassin’s Creed II confidently retooled the debut’s fundamentals into much tighter forms, along with introducing an excellent new ancestral protagonist in Ezio and a fresh new era with the European Renaissance. The Ezio arc expanded further into two more superb installments: Assassin’s Creed: Brotherhood and Assassin’s Creed: Revelations. After the conclusion of Ezio’s story, Ubisoft revamped the series further with Assassin’s Creed III, introducing another new protagonist in Connor and an altered gameplay setup. Between Assassin’s Creed III and its successor Assassin’s Creed IV: Black Flag, Ubisoft published the Vita game Assassin’s Creed III: Liberation (which was later re-released on PS3 and 360 in an HD form).

It’s safe to say that the Assassin’s Creed story has become a branching web of heroes and villains, with new ancestors running the helm for the Assassins and the Templar forces steadily revealing their importance. Add in astral deities like Minerva and you have one super-existential approach to your typical action game series. Assassin’s Creed’s storyline of using the technological mind-reader the Animus to experience ancestral memories is pretty interesting, allowing for multiple eras and locations to be used to further the gameplay. It’s Ubisoft’s excuse to jump from The Renaissance to the American colonies within a short release period without feeling out of place. And that’s fine. It’s really interesting seeing how the Assassins’ skills can be translated from a colossal cathedral to a snow-covered plain. The Animus offers ample creativity for its story, making it one of the most important factors into the story’s strongest moments.

But while the Animus is the launch point for the story, that can’t be said for the characters. Let’s start from square one: Altaïr. It’s no argument that Altaïr was a downright pathetic excuse for a main character. Sure, he was a badass, but that sense of daring came coupled with an emotionless and un-relatable protagonist. Maybe it was his terrible dialogue. Maybe it was his monotone voice. Whatever it was, though, it made going through Assassin’s Creed a real ordeal. Fortunately, Altaïr’s descendent Ezio was his own personal antithesis. Ezio was an amazing character. From the beginning of Assassin’s Creed II to the final moments of Revelations, Ezio’s story was just plain awesome. We got to see him rise up from a delinquent street brawler to a wise, sage-like Assassin commander. We even got to use Ezio’s story to revamp Altaïr, as seen through flashback sequences in Revelations. That progression and everything within it was incredible, making the Ezio trilogy an intelligently crafted narrative of one of the last generation’s greatest new heroes. But with Assassin’s Creed III, Ubisoft began stumbling. We did get to see a new world in colonial America, but through the eyes of a main character that simply wasn’t interesting. Connor, aside from taking far too long to be properly introduced, never emitted the kind of captivating charisma that Ezio showed. He leaned toward the AC1-era Altaïr side of the fence. His journey was long-winded and generally lacking, causing his story to end after Assassin’s Creed III. 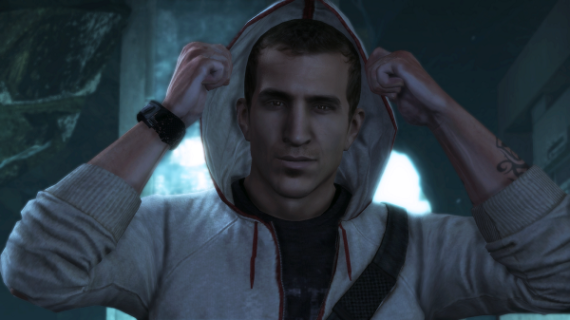 And between all of these protagonists, we have Desmond Miles, the man who uses the Animus to experience these characters’ lives. Desmond began as the everyman test subject, but his importance to the series was revealed down the line. But even with a more direct connection to the Assassin Order, Desmond Miles’ significance has always been extremely artificial. We’re given a background of Desmond’s life, but as a player, we cannot do anything with it. Despite a last-minute sense of placement in his story, there’s no reason to really feel engaged to Desmond’s trial. Desmond’s role in the entire series is the stoplight at the intersection where all of these other characters’ stories meet. He’s a channel without any further purpose, solely to see other characters’ lives through him. It makes the portions of the games where you play as Desmond seem pointless, even the ones that, at the absolute final stretch, are supposed to give him something meaningful to accomplish. He has his moments of spotlight, but when it comes right down to it, Desmond really has no essentiality to the Assassin’s Creed narrative except as the bridge the characters walk over. There’s nothing else to him. 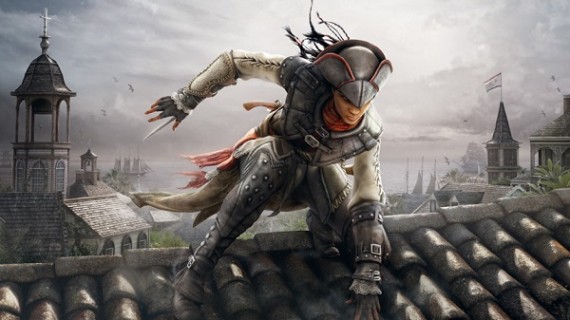 Assassin’s Creed IV: Black Flag and the Vita game Assassin’s Creed III: Liberation began a separate arc in the series, where the player explores these characters’ memories not as Desmond, but as an employee at Templar headquarters Abstergo. It certainly sounds refreshing, after the meaningless jaunts as Desmond, but this diversion makes the narrative problems even worse. Playing as this faceless lackey, we have no character, no connection to go by. While we can explore these games as Edward Kenway and Aveline de Grandpré respectively, the stories aren’t connected to anything Desmond and his team are doing. They are disjointed escapades that Ubisoft has to magically manufacture significance to make worthwhile. And while I can say that Aveline is a powerful protagonist, one that I’d love to see evolve further, I can’t say the same for Edward Kenway or Connor from Assassin’s Creed III. Neither of those characters had longevity in the narrative, but the promising lead of Aveline was also dropped. These protagonists simply don’t possess the panache to be worth expanding a story upon; unlike Ezio who got a fantastic arc with an awesome narrative, these new characters are being disposed of quickly, long before their strongest aspects are discovered.

But the biggest issue that Ubisoft has created is that this story is not being tightly wound. The Assassin’s Creed story is based around opening doors, not closing them. While Altaïr and Ezio got proper conclusions to their stories, we’re left with hanging endings with the three new characters. At the same time, we’re hearing more and more about the looming war of Assassins and Templars, along with the deities and higher-level consciousnesses involved. The story is becoming absurdly complex, but that complexity isn’t display as a planned one. The story of Assassin’s Creed doesn’t sound like it’s being thought out as a whole, but instead written further as the games are continuously released. With so many plot points introduced across the series, Ubisoft is only making it more and more difficult for themselves to make a connective and coherent narrative. With each new game, the series is becoming more and more likely to miss the mark of completion and end up being one giant mess of metaphysical commentary and hyper-philosophy. That’s no way to make a good story. 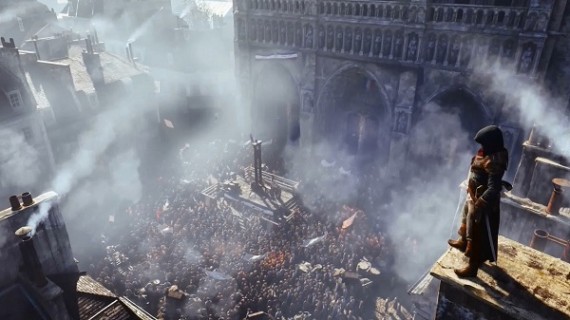 With Assassin’s Creed Unity on the way, the series continues down the treacherous road of making itself more and more layered without trimming any of the fat. The last three protagonists of this series have become soulless one-shots, only serving to complicate an already detailed story. Desmond Miles’ place in the story is constantly trapped behind the stories of Ezio, Connor and Edward Kenway, always serving them and never serving his own character meaningfully or interestingly. We’re still seeing new Assassins rise to the stage and we’re still seeing new locations and eras to explore. I like that a lot, but I don’t like that there’s no reason to it all. There’s no plan as to why Ubisoft chose one over the other. The Assassin’s Creed series isn’t likely to cool its jets anytime soon, which makes confidence for a proper and well-constructed conclusion wane rapidly. This is a series that’s on the cusp of self-destructive pretention.

Will the series eventually become that perfect circle down the line? Maybe, but not if Ubisoft doesn’t start answering some questions before asking new ones.