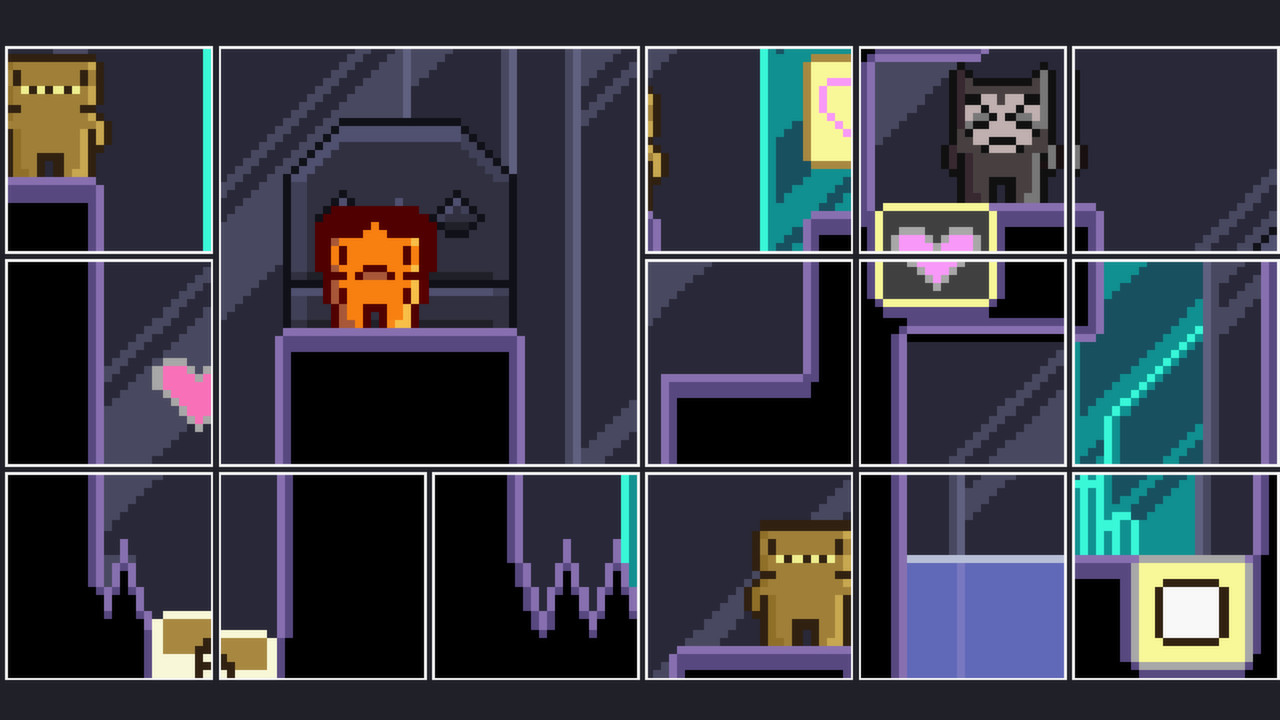 It’s not often that games pose introspective questions to the player just with their title alone. Where is my Heart? is not focused on deep analysis of the player, but it is a puzzle platformer set to get you thinking. Somehow, despite the genre being supersaturated, it even manages to provide a new, interesting gimmick. Does that make Where is my Heart? a game worth playing?

If you’re hankering for a good puzzler, then this is definitely one to check out. The game begins with cute little blocky creatures who witnesses the disappearance of a special tree. With no backstory or explanation you just accept that these three monsters must save it. They must also collect a multitude of hearts along the way. The storytelling is incredibly minimalistic and a similar tactic is used for tutorials.

Players are given the barest of instructions and then must work out the rest on their own. This works, even though the design is incredibly unique. You see, every map in the game is cut up into comic-book style panels. Panels are also not always laid out in the order you would expect. For example, walking through one panel will rarely let your character walk out on the panel immediately to the right. Instead, you’ll likely see them walk off a cliff that appears on the total other side of the screen. Basically, every stage is cut up and rearranged in a different way, meaning you must be aware of which panel leads where to succeed.

It takes a while to wrap your mind around the concept simply because each state utilizes this feature in different ways. Each stage also teaches new things and forces the player to continually assess possible puzzle solutions. Early on you gain access to alternate forms of your monster pals, each with their own special ability. For example, one can shift all panes left or right which proves useful to reorient yourself in a better position. Experimentation leads to many deaths but thankfully there is an unlimited stock of lives. You won’t get perfect scores for each stage but that’s something to be attempted during a second or third run-through.

Platforming is usually made difficult due to precise jumps or enemies but this is not the case here. As such, players might find themselves stuck when they can’t figure a puzzle out. Ultimately, this leads to frustration but usually leaving Where is my Heart? and returning to it later helps. A fresh perspective is always a good thing as far as puzzle games are concerned. As it turns out, the game isn’t tremendously long either which means there aren’t too many sticking points to overcome.

It’s a shame the game is so short because the atmosphere is just wonderful. The pixel art is colorful and has a great deal of personality. A soft soundtrack in the background also helps players enjoy the little world further. Listening to the mellow tracks also aids with lessening frustration, at least for a while.

The main issue with Where is my Heart?, if you could even call it that, is a slightly odd default control scheme. For some reason, it just doesn’t make sense to swap characters via the shift key. Obviously, this is a minimal complaint and is resolved via rebinding keys to your liking. The bigger disappointment is a current lack of controller support. This is especially odd considering the game first launched on PSP. There must be something larger in the way which prevents the developers from adding controllers into the PC version.

Where is my Heart? is an enjoyable puzzle platformer romp. The way it shuffles up a stage into small, disorganized segments is incredibly cool and forces players to think in different ways. It’s just a shame that it only lasts a few hours. The world is simply so inviting, and the concept so unique, that it would have been nice to spend much more time with it. Regardless, however, Where is my Heart? is set to capture the hearts of players.