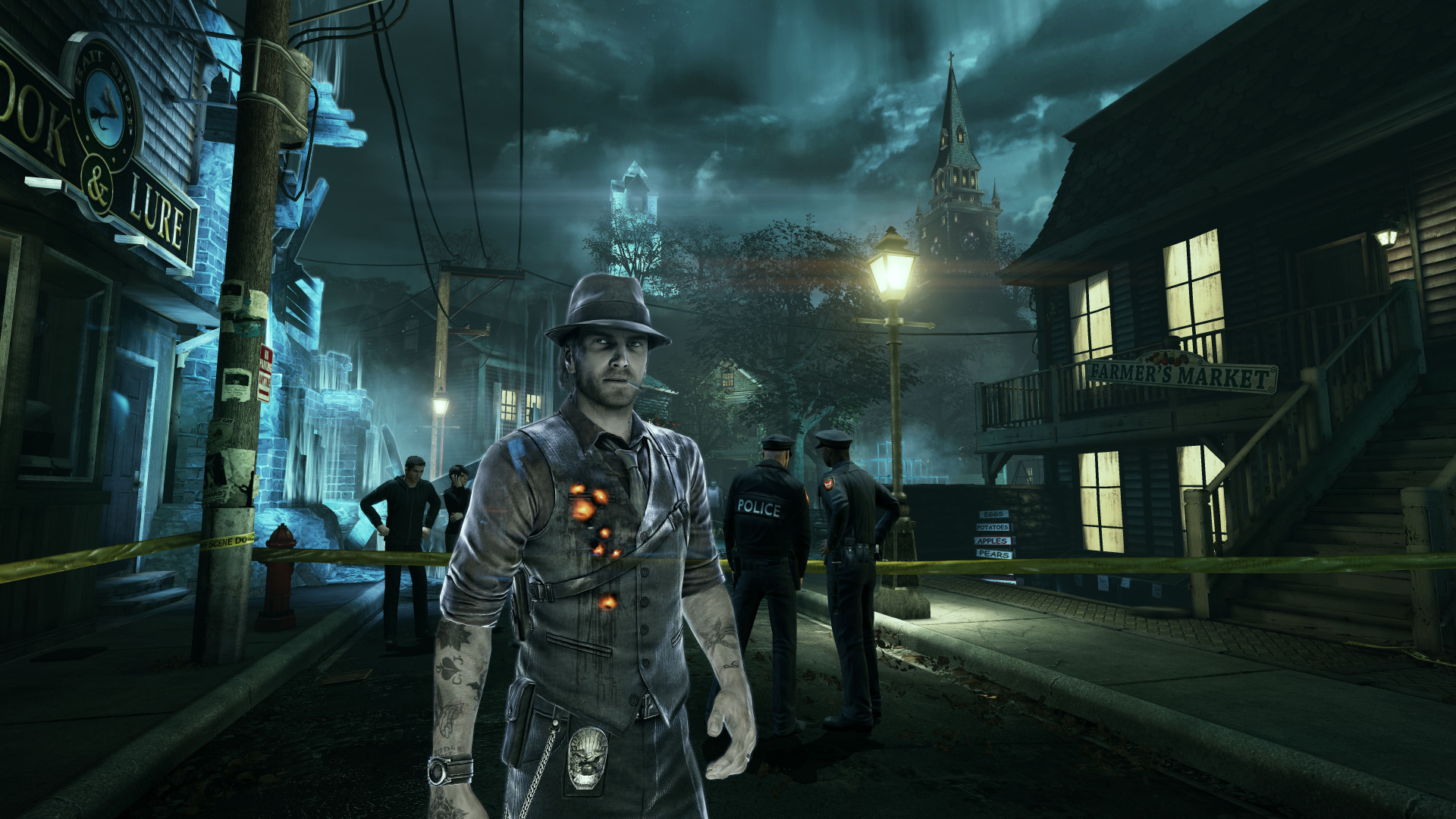 Murdered: Soul Suspect is one of recent history’s best examples of how video games are evolving. No, it’s not spectacularly brilliant, nor does it change the way we play our games. Square Enix Japan and Airtight Games’ purgatorial murder mystery suffers from “Should Be a Television Show” Syndrome; it is the direct opposite of Revolution, the television program that should have been a video game. Even though it’s not a colossal train wreck, Murdered: Soul Suspect‘s gameplay structure directly impedes nearly every aspect of its novel concept. We have reached the point where being a game can get in the way of being a good game.

Set in an outrageously gray version of Salem, Massachusetts (a travesty to those who have ever visited the colorful city), Murdered: Soul Suspect tells the story of freshly-deceased detective Ronan O’Connor. The tattooed-criminal turned tattooed-detective finds himself dead at the hands of the Bell Killer, a brutal serial killer terrorizing the streets of Salem. Immediately after his death, Ronan’s long-since-passed wife, Julia, informs him that he will perpetually be stuck in limbo unless he ties up his life’s loose ends. Taking this to mean that he must solve his own murder, he sets off to bring down the Bell Killer using his new-found ghostly abilities. Along the way, he finds a human partner in the borderline-unbearable Joy, and an outstandingly annoying teenager with the ability to see and communicate with ghosts. Yes, Murdered: Soul Suspect is essentially the lovechild between L.A. Noire, Heavy Rain, and Casper: The Friendly Ghost.

Though it relies heavily on the most ridiculous serial killer tropes, Murdered: Soul Suspect‘s story is its saving grace. Ronan goes to every cliched spooky locale in the book (with the asylum and graveyard being perhaps the most egregious offenses), yet the narrative manages to remain bearable. Its best comparison comes from crime-based television, as it feels like a short season of a supernatural crime drama. Take any episode of Criminal Minds, make it seven hours long, add ghosts, and you essentially have Murdered: Soul Suspect. Make no mistake, this is more of a compliment than a criticism, as its procedural television undertones give it a fair bit of charm. While it certainly won’t blow anyone’s minds, Ronan’s narrative is gripping enough to warrant putting up with some positively abhorrent gameplay elements.

Each chapter and side mission comprises of one of more passable, yet never captivating investigations. Each section is essentially the same: look around for clues, piece them together, view some flashbacks, and move onto the next area. Although these sequences are repetitive, detective-based games are able to get away with this sort of crime-solving, as it closely mirrors the tedium of real-life police work. Easily the most exasperating aspect of Murdered: Soul Suspect‘s clue-finding is its poorly thought out information system. After pressing the inspect button to gather evidence, players are forced to press a second button to actually learn what said evidence is. Sometimes it is blatantly obvious what the clue entails, but it is often impossible to discern the contents of a poorly-textured note or photograph. This extra button press quickly becomes tiresome, leading one to wonder why the developers failed to include a more seamless mechanic.

Although being a spectral presence is never more than mildly gripping, doing ghost things is decidedly more entertaining than doing detective things. Being a spirit prevents Ronan from physically manipulating the world and its inhabitants, forcing him to either haunt or possess his surroundings and human (or feline) counterparts. Players are able to easily possess Salem’s various citizens, both during missions and inside the game’s pseudo-open-world version of the city. With a simple pull of the right trigger, the thoughts and motivations of a given individual are instantly available. Each face button has a specific possession function: peeking through the person’s eyes, hearing their thoughts, influencing them, or leaving their bodies entirely.

Possession and poltergeisting (manipulating certain electronics in the environment) allow Murdered: Soul Suspect to provide a fresh take on the traditional mystery genre. However, the game’s more active gameplay elements don’t just take away from the experience as a whole, they nearly sink it entirely.

For whatever reason, Murdered: Soul Suspect‘s developers felt the need to include a combat system in their game. At various points, players will have to maneuver their way past soul-sucking demons in order to advance. While simply running away from these enemies is possible during early encounters, eventually players will have to defeat demons if they have any hope of continuing the story. Sneaking up on demons requires the use of spirit-based hiding spots and bird-based distractions. Players who are lucky enough to not be spotted have to execute a quick-time command while holding the right trigger in order to quell the purgatorial beasts. Rarely do these sequences ever go smoothly, as getting spotted and defeated often becomes an inevitability. Every demon sequence is an absolute chore, and these obnoxious moments will almost assuredly cause a number of players to give up on Murdered: Soul Suspect entirely.

If enemies were completely absent from Murdered: Soul Suspect, it would likely be a better game. Imagine if Gone Home had damage-causing ghosts roaming the halls of the Greenbriar household — the narrative’s beauty would be significantly diminished. If Murdered: Soul Suspect was simply about exploring the environment, piecing together a mystery, and using Ronan’s spiritual status to travel in unique ways, it would be a much more rewarding experience. The demon sequences are a perfect example as to why games do not require combat, as shoehorning in video game tropes for the sake of action is a phenomenal way to deliver mediocrity.

On top of its displeasing gameplay elements, a number of noticeable technical issues hamper the overall experience. While the game appears to have moments where it is humming along at a solid framerate, numerous drops and outright freezes prove to be a massive distraction. Add these performance problems to numerous loading screens, and you have the formula for a lackluster gaming experience. Additionally, Murdered: Soul Suspect has some of 2014’s most bizarre lip-syncing. Sometimes characters will have moderately realistic facial movements; other times they simply will not mouth the words they are vocalizing at all. Granted, Murdered: Soul Suspect doesn’t run as poorly as Thief; however, the combination of these two titles should leave the community concerned about the state of Square Enix’s technical prowess during the early parts of the new console generation.

Neither good, nor bad, Murdered: Soul Suspect is about as average of a video game experience as one could hope for. It likely would have been better served as an A&E miniseries, as its gameplay does a phenomenal job of souring the overall experience. While its concept is unique, its execution leaves an incredible amount to be desired. Unfortunately, the mystery of Ronan’s murder is not nearly as thought-provoking as the mystery of when Murdered: Soul Suspect will be offered at a discount.