Gamers who claim that today’s releases lack difficulty can rest easy. Instead of holding your hand, 1001 Spikes breaks each of its bones one by one. The masochistically difficult platformer is an improved version of 8Bits Fanatics’ Xbox Live Indie title Aban Hawkins & the 1001 Spikes, and good God will it beat you down. The lovechild of Spelunky and a heroin overdose, 1001 Spikes will test the patience of even the most seasoned gamers. Thankfully, its mechanics put the blame for failure squarely on the player’s shoulders, allowing those who undertake its journey to feel deeply satisfied upon completing a given stage.

1001 Spikes tells the story of the aforementioned Aban Hawkins, a dashing, young explorer. After his excessively rude father gives his entire estate to his sister Tina, he tells Aban that a legendary treasure lies behind the Poko-mum door in the Ukampa ruins (say that five times fast). Desperately seeking to prove his father wrong, Aban sets off to uncover the treasure, as his self-worth is almost entirely dependent on how his father views him. Boasting multiple endings, each based off of how much of the game the player is able to complete, Aban’s story is decidedly open-ended. Because of 1001 Spikes insanely difficult gameplay, however, only the most incredibly skilled players will be able to see how Aban’s story shakes out.

While its brief, text-based story elements are mildly interesting, 1001 Spikes‘ bread and butter is its gameplay. Its premise is simple: make it through every one of the game’s levels without losing your 1001 lives. At face value, having 1001 lives seems a bit excessive; how bad at video games do you have to be to not beat a game in 1001 attempts?  For a good number of people, this will be the most difficult game they have ever attempted. Think of it as a platformer where every inch of the environment is trying to kill you; there are no puzzles to speak of, but simply surviving requires a great deal of thought. A single hit from any of Ukampa’s countless traps sends Aban directly to his death. Precision and patience are needed to complete every level, including what can only be described as possibly the most difficult tutorial of all time. That’s right, the tutorial levels are roughly as difficult as the later stages of most platformers. If you aren’t convinced that 1001 Spikes is insanely challenging, here is a statistic that illustrates its brutality: Only 5.9% of those who have started the game on PlayStation 4 have actually been able to finish it.

Thankfully, 1001 Spikes‘ mechanics give the player every chance to succeed, as deaths rarely feel “cheap.” Sure, spikes may come out of the floor at a moment’s notice, but players who are patient enough to learn each level will find themselves avoiding these surprises. Other than the D-pad controls, 1001 Spikes only requires the use of three buttons. Players execute a low jump using X, perform a high jump using triangle, and shoot darts using either square or circle. 1001 Spikes has incredibly tight physics, as Aban never feels out of control. Perhaps the greatest feature of the game is how well Aban’s mid-air flight path controls; the player character only moves in the air if the player is pressing a directional button. Take your thumb off of one of the directional buttons and Aban will cease all lateral movement. It’s a brilliant mechanic that allows players to be as precise as their skill level allows them to be. Without a doubt, 1001 Spikes is one of the best-controlling platformers of 2014.

Boasting numerous stages in six distinct worlds during it’s main campaign, 1001 Spikes has some impressive level design. Though each world’s sages appear roughly similar to one another, every level feels distinctly fresh. Completing each stage requires discovering a different trick; perhaps players need to time their movements across spiked floors or jump over boulders at just the right moment. The 8-bit inspired art-style can lead levels to feel limited at times, but 1001 Spikes‘ stages never feel as though they are copied and pasted. Granted, there are only around ten types of traps and enemies combined, but they are almost always used in ways that feels fresh.

Because 1001 Spikes‘ mechanics give players the ability to conquer its maddening difficulty, its challenge is not necessarily an issue. It’s easy, however, to see countless players giving up on it in order to play something more accessible. Dying 100 times in a row before beating a level is not uncommon, so those who grow tired of constant restarting will find 1001 Spikes dull and repetitive. It takes an incredible amount of patience to keep attempting to best 1001 Spikes‘ insane traps, as players will die hundreds and hundreds of times throughout the campaign. While beating every level on the first try will cause the game to be roughly twenty minutes long, it’s easy to see 1001 Spikes lasting anywhere from eight to fifteen hours for most players. If you do not consider yourself to be patient, run away as fast as you can. 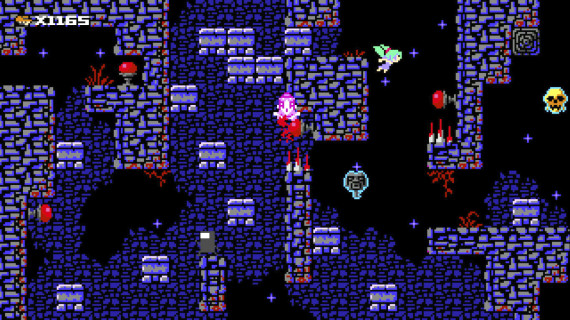 Those willing to give 1001 Spikes a fair try will find that its mind-numbing challenge can lead to some incredibly satisfying moments. Its brilliantly crafted mechanics give players every opportunity to best the treacherous traps of Ukampa. Unfortunately, it’s easy to see countless players quitting after a couple of levels, as its difficulty severely limits is accessibility. This back-breaking platformer accomplishes everything it sets out to accomplish, meaning that it is a decidedly good video game. 1001 Spikes‘ challenge doesn’t hurt its cause by any means, but those who despise trying something hundreds of times in a row will find themselves quickly turned off.