It’s no secret that CD Projekt are blowing RPG fans’ minds with their series The Witcher. Even among titans like The Elder Scrolls running the open-world RPG show, the series has become a critical darling and one of the smartest evolutions of the role-playing formula seen in years. The Witcher 3: Wild Hunt was announced in early 2013, and CD Projekt RED haven’t stopped working in evolving their already progressive series. Thanks to some healthy new ideas and a world so massive and expansive that it’ll make your head spin, The Witcher 3: Wild Hunt is an RPG with teeth, and it’s prepared to bite.

The Witcher 3: Wild Hunt, even after more than a year of development after being announced, remains a gorgeous game, pushing the limits of next-gen beyond the uncanny valley and into full-blown environmental beauty. CD Projekt RED have really set themselves apart from the crowd with designing aesthetics in RPG’s with stunning lighting and purely naturalistic environments. The shown PC build is stunning to watch, a fine example of creative and fundamental art design. The devs have introduced three different environmental regions to explore in The Witcher 3: a Scandinavia-inspired island region, the wastelands of No Man’s Land, and the urban center of Novigrad. CD Projekt’s Peter Gelencser said that the enormous world is 35 times bigger than The Witcher 2 and can take twenty minutes to traverse from north to south, even with the fastest movement speed activated.

The Witcher series is widely praised for its approach to choice in its adventure, and The Witcher 3: Wild Hunt is set to have a massive scope, upwards to 50 hours for the main quest alone and another 50 for the supposed average playthrough with side quests. While fast travel will be introduced, it can only be used after key locations are found, requiring the player to saddle up and explore the world. In addition to a wide and open-ended campaign, Wild Hunt introduces a more lateral approach to progression, encouraging players to go off the beaten path, regardless of where they are in the narrative. 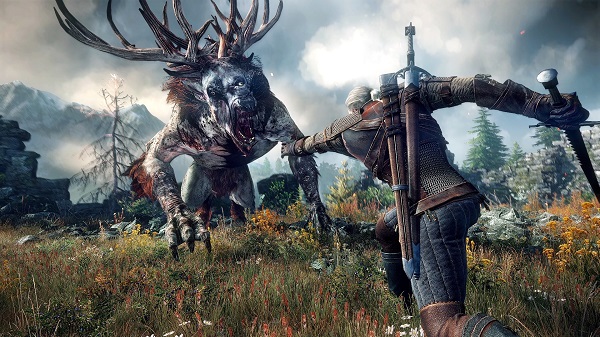 Though its role-playing elements are the meat of Wild Hunt, the action is the potatoes. CD Projekt RED are adding new combat maneuvers and mechanics, including a full dodge system (not just a backwards dodge), a dismemberment system to attack enemies in different ways, and even more tactical uses of items and weapons with a fresh parry mechanic. Combat encourages experimentation, with the game giving new skills and abilities to try out in and out of combat. Enemies will also have the same amount of intricacy, with the swamp monsters of No Man’s Land being a nice demonstration of both the gorgeous graphics and the new combat skills.

The Witcher 3: Wild Hunt remains a highly anticipated title from a studio that rose to icon status in a short period of time. CD Projekt RED continue to improve both the gameplay and the aesthetics of their acclaimed series, and Wild Hunt looks to be one of the most confident steps into the next generation of gaming we’ve seen yet.