Though there are plenty of contenders for the best new IPs of the last console generation, there’s definitely room to consider for the Assassin’s Creed series. The historical fiction of the series wasn’t just for show, but demonstrated the power of the PS3 and Xbox 360, all with immersive worlds and some striking new interpretations of historical eras. It’s pretty surreal thinking this series just debuted seven years ago, but it’s a generation later, and the series’ first installment completely built for next-gen hardware, Assassin’s Creed Unity, was no stranger to the E3 spotlight this year.

Hardcore Gamer got a chance for a live preview of Assassin’s Creed Unity, courtesy of the game’s dev team. After getting a look at both the single-player and multiplayer co-op missions, it’s pretty easy to see that Unity isn’t just another installment of the series. Risks are being taken and Ubisoft is putting a lot of effort into smoothing out the wrinkles and making Unity an overall tighter game. 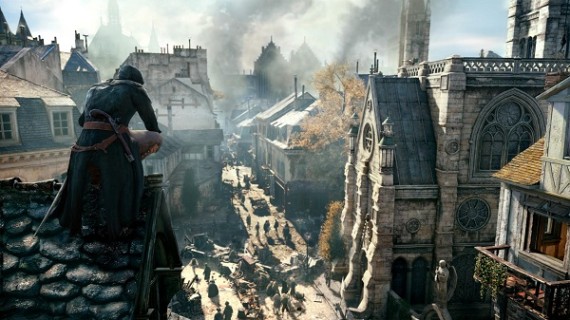 Assassin’s Creed Unity takes place in France during the French Revolution, so it makes sense that the nation’s capital Paris is a central locale for the game. In the single-player preview, the player character was Arno Dorian, providing an ideal opportunity to show off a number of new movement features in addition to the city’s enormous scope, which was dubbed by Ubisoft as “the biggest city in an Assassin’s Creed game yet.” A huge crowd stood on the city streets, over 1300 people, all controlled with their own AI scripts. Ubisoft also detailed the proportional scale of major Parisian landmarks like Notre Dame, which was a 1 to 1 architectural match to the real-life landmark. All of the wandering NPC’s move realistically and independently, allowing for an immersive environment that easily dwarfs those of past games. Also, NPC events like thefts and brawls will appear instantaneously, continuing Ubisoft’s goal of creating a dynamic and fully alive world.

Ubisoft demonstrated a number of new moves for Unity. A major feature was the “parkour up” and “parkour down” elements, which streamline ascent and descent of buildings. The parkour down feature in particular allows Arno to quietly descend a building by climbing down its side with the right-trigger and B button, wherein past Assassin’s Creed games used the Leap of Faith as the foremost method to descend from a rooftop. With parkour down, stealthy descents are more controlled, though the Leap of Faith is still available as a quick option. In addition to stronger navigation when climbing, the interior environments also offer new methods of getting around. A number of trailers had Arno swinging in from outside a window and cutting through a building’s interior. Ubisoft included many interior environments with Unity, with one in every four buildings having interiors to seamlessly enter and exit.

Stealth and combat remained mostly the same in the preview, though a new feature definitely streamlines the gameplay: stealth mode. While using the assigned button for stealth mode, Arno can automatically snap to cover while making less noise. It did seem to alleviate many of the control quirks that have plagued earlier installments in the series, while still keeping the stealth sections dynamic. Combat is more layered not by the moveset, but the world itself. Combat scenarios can be interrupted by NPC’s on the city floor, who can watch a brawl and even step in to help or hurt you. It definitely added some unpredictability to the combat, which up till now, has been a rather standard affair.

Mission structure for single-player is different in that mission notifications appear even when outside of the map screen. Floating icons can signify mission objectives and targets, keeping the gameplay smooth and streamlined. The single-player assassination mission shown in the preview surprised us with our target actually turning out to be incorrect from what we were lead to believe, with Ubisoft reps smiling as they explained the game’s dynamic and lively scene. It was a shock to see such an unpredictable element to the game’s environment, but it only encouraged us to get involved in Unity’s world. The end of the preview took place around a public execution at the guillotine with Arno’s goal to create a riotous stir. The classic Eagle Vision has been changed up to Eagle Pulse, which allows us to see key targets and opportunities to complete our mission. With 2000 NPC’s viewing the guillotine, it was a real spectacle. 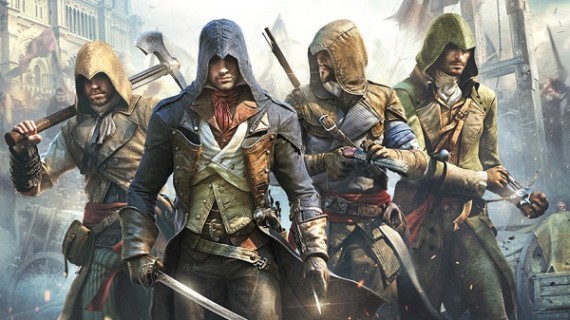 The single-player also detailed the Tavern settings, where players can talk to shopkeepers to earn new items (like the crossbow-esque Phantom Blade projectile), look for missions, and most importantly, join up with friends to complete multiplayer missions. Seguing nicely into the co-op mission, Ubisoft brought out some more dev team members and prepped for the cooperative challenge of assassinating a corrupt marquis in the heavily guarded Palace of Luxembourg (another real-world landmark from France). The first goal was to weaken the defending guards, allowing the rioting peasants the chance to break through their barricade. The four players were able to coordinate their diversion toward the guards with a handy countdown timer, which allowed their team plan to work without a hitch.

With the peasants storming the palace, the assassin squad could start infiltrating the inner quarters. Some team members lockpicked doors, with one getting noticed by a guard. What could’ve meant mission failure was quelled by the assassin’s teammate, who took out the guard before things got too hairy. Ubisoft reiterated the importance of teamwork in Assassin’s Creed Unity as the guard fell. As the palace became more and more lavish, Ubisoft teased us by showing us the beautiful Gardens of Luxembourg, before turning around and returning to the mission. The preview closed out with a carefully positioned assassination of the marquis from all four team members. 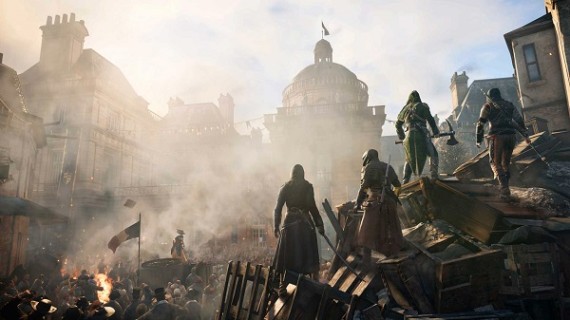 Both the single-player and multiplayer sections allowed Ubisoft to show off plenty of new ideas for the Assassin’s Creed series, along with presenting some stunningly immersive world design of Revolution-era France. The more streamlined navigation is mixed with a fantastic focus on rich and involving environments. The NPC crowds and dynamic sense of placement in combat made the preview build pop, always keeping us on our toes. The cooperative missions definitely prided on teamwork and coordination, but it appeared as a striking evolution of the Assassin’s Creed gameplay. To top it off, some excellent graphic design and real-world authenticity made the Paris square a sight to behold.

Assassin’s Creed: Unity could be the next big step for the series, but we’ll be sure to give you the verdict when the game ships for Playstation 4, Xbox One and PC on October 28.