It’s a gorgeous LA evening across the street from the LA Convention center, and Devolver Digital’s parking lot of silver trailers is thumping with music while the smells of barbecue waft past the chatting throngs of people. There’s beer and soda, food for everyone, and each trailer is there to showcase a different game. It’s basically a non-nerdy gamer paradise, but the gaming aspect is over for now. It will start over the next day, of course, and then all the developers will return to their trailers to get down to the business of showing off all the fantastically cool games that make Devolver Digital’s booth more than just a fun party.

The gaming lineup is incredibly diverse, ranging from an action/puzzle/RPG in Titan Souls to the randomized FPS Heavy Bullets, Hatoful Boyfriend’s visual novel, Hotline Miami 2 and Broforce being pixeliciously brutal in their own distinct ways, Croteam’s puzzle/FPS The Talos Principle, and the side-scrolling building assault game Not a Hero. Consistency is boring, after all, except when it comes to quality. My time was spent with four of those games (Broforce, Heavy Bullets, and Not a Hero already having been looked at, and there’s just not enough hours in the day) and each one was unique and pleasantly strange in its own right. 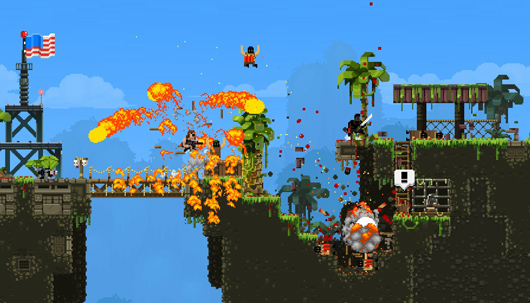 Starting off was Titan Souls, which you can play the Ludum Dare prototype of right now. It was originally made for the You Only Get One challenge, which in this case means you only get a single indestructible arrow to take out a series of difficult bosses. They’ll kill you pretty hard in ways that seem initially unfair until you learn their patterns, and then it’s just a matter of executing a plan with efficiency and precision to sink that single arrow into the vulnerable spot. Each encounter is like an action puzzle that you need to solve by burning through as many lives as it takes. The newer, prettier Titan Souls expands its boss encounter list to twenty, rather than the original’s four, and has a larger world to explore that should have plenty of secrets to chase down. My hands-on with the E3 demo only ended after I’d beaten the fourth encounter, and if I’d had more time I’d happily have played longer.

The Talos Principle was next in line over in Croteam’s trailer, and it’s a very different animal from Serious Sam. Billed as a philosophical FPS puzzle game, The Talos Principle is seen through the eyes of a mysterious individual who needs to find sigils to unlock new areas that contain more sigils to progress on through the world. The demo on display had a semi-open world you could wander through, with signposts pointing the way to the next sigil area. While the world is free to wander through, the puzzles are set in enclosed areas. The demo puzzles were in the ruins of what seemed to be a cathedral, open to the sky but with doorways barred by staticy blue force fields. Knowing what to do to open the doors was pretty easy- point a jammer at it and activate, or move a device to guide a light beam to an activation switch. Preventing the blue and red beams from crossing and deactivating each other, on the other hand, was considerably trickier. The reward for solving the puzzle is a sigil, which looks suspiciously like a Tetris piece, and once you’ve got enough of the right kind you can use them in a game of tertonimoes, arranging them to fill in a grid to open the next door to the next set of puzzles. It’s a slower pace than we’ve come to expect from Croteam, and the story involving AI and its effects more cerebral. Telling a story about AI in a world that has Freefall is going to be a bit of a challenge, but hopefully it won’t be yet another Frankenstein’s Monster scenario. 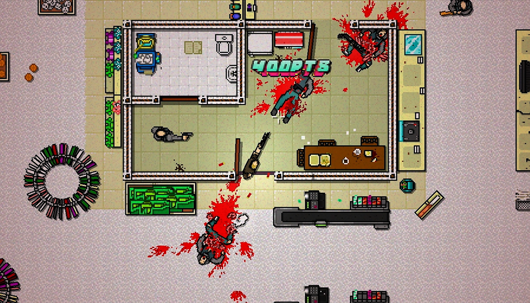 Hotline Miami 2 came next, and while it looks the same this year as last, what was on display was the level editor. There will be no Hotline Miami 3, but by the time the editor is done fans will be free to create as many unofficial versions as they’d like. Laying down rooms, populating them with furniture, and setting up enemies and arming them with specific weapons was demonstrated in a matter of minutes, resulting in a level that was instantly playable. While there’s no real limit on the size of the map the editor can create, it’s worth mentioning that anything built is going to be Hotline Miami. Trying to rebuild the original GTA just isn’t going to work, but so long as people remember this possibilities for creation are wide open.

Finally was the weirdest game of the bunch, Hatoful Boyfriend. This is a remake of the visual novel about being a girl attending a school for pigeons, taking classes and dating the oddly sentient birds. The remake is highly faithful to the original, keeping the pigeon pictures and touching them up as little as possible to make them work against the full remade backgrounds. Even by gaming standards Hatoful Boyfriend is a bizarre one, but the original was honestly clever in its storytelling as well, making it well worth brushing up into a full release. 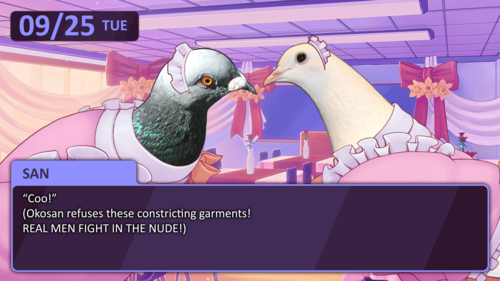 So that’s four games, each different than the last. More than a little similar to the PAX East showing, now that I think on it. It’s a big colorful wonderful world of diversity, new experiences both small and huge and all worth at least taking a look at. Devolver Digital has been pulling out all the stops on becoming the Image Comics of the gaming world. That’s something we need as much as lovely California evenings, good music, and tasty barbecue.