The dust has settled from an astonishing E3 week. To finish off the biggest week of the gaming year, lucky gamers around the world were treated with 3 glorious days of the Destiny Alpha. Destiny has arguably been the most anticipated game since E3 2013. The momentum has never declined and the team at Bungie began the Sony conference with Destiny as the opening cinematic. The show ended with an Incendiary Grenade (Hunter Class) type bang as the Destiny Alpha was announced beginning on Thursday, 12 June.

No other game was loaded up in my console all weekend as Destiny was the appetizer, main course and dessert. Gamers around the world are praising Bungie for a job well done. Fans have undoubtedly fell in love with Destiny during the short stint that alpha gameplay was made available. I searched and read through many forums, websites, and communities online and as you might expect, the complaints regarding Destiny were few and far between. Bungie surprised the world with the alpha opportunity and the people have spoken; Destiny is even more anticipated than prior to E3 2014. 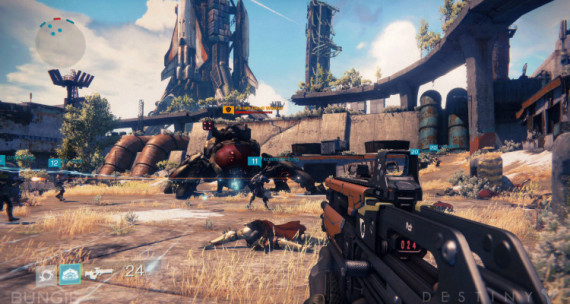 Suffice it to say, Destiny kept me highly engaged and entertained all weekend long. I briefly want to go over the top 3 features of the Shooter/MMO mashup that captured me the most.

I entered a game solo because I was being anti-social and wanted to tackle the strike on my own. To my dismay, 2 random gamers were thrown into my game to join my strike team. I brushed it off and began playing. The gameplay was phenomenal. The firefights with the fallen throughout the rest of the game were fairly easy. The Devil’s Lair was difficult! And to think, I didn’t even play it on the “Brave” setting. The bosses were very difficult causing myself and the 2 other players to die, die, and die some more. The entire strike took about an hour and at the end, the strike team was given excellent rewards to include XP, weapons, and armor. To be honest, I don’t think I could have finished that strike on my own. Cudos to the players that invaded my game!

Destiny can be played solo, with friends or with random gamers. In every shooter, the most popular game mode is always Multiplayer. Destiny needed a sure-fire ingredient to separate itself from the multiple shooters currently on the market. Bungie executed this to perfection using the special class abilities. While playing as the Hunter Class, I found myself constantly glancing toward the bottom left of my television screen to see if my incendiary grenade had re-established itself. Furthermore, when the hunter becomes Supercharged, I loved the flaming pistol because of it’s one shot to kill ability.

Finally, the 3rd feature that grabbed my attention was the way Bungie teased us. While visiting “The Tower”, I am sure most gamers upgraded their armor and weapons. Did you not find it strange that Bungie left armor, weapons and other gear in the marketplace that required Level 20 to purchase? Some of the gear was 5x more powerful than the best gear gamers were able to acquire at the max Level 8. This alone left my mouth salivating for more when the Beta releases on 17 July. Whether Bungie will add more gameplay and levels to the Beta has yet to be confirmed. I am sure after playing the alpha, Bungie has a great deal of content that will keep fans busy for quite some time.