Halloween isn’t, and has never been, my idea of a good time. It doesn’t really gel with me, nahmean? I don’t like wearing a costume, mostly because my prostate ages rapidly whenever I’m in a situation where pants shouldn’t be removed (i.e. surrounded by children), and I don’t particularly care for candy. It’s definitely not because I’m forced to dim my lights every year due to an obnoxious state ordinance, that’s for sure. That said, I’ve managed to nurture my bitterness a tad over time, integrating various pranks and scares into my holiday routine. But somewhere along the line, perhaps between an awful Michael Jackson impression and an even worse impersonation of Rachel Dratch, hearing children scream just didn’t do it for me anymore. I needed something new; something exciting and interactive. I needed a videogame.

That’s when the original Costume Quest, one of my favorite slices of gaming pie, became something of a yearly ritual at Casa De Cooper. Rather than be bothered with social interactions, mindless drinking and skimpy outfit spotting with friends, I opted to sit on my ass and battle monsters with a cast of virtual kids — that, and provide a mess of business for local dentists. It’s the perfect Halloween in my book, and a tradition I intended to uphold until word of a sequel made waves around the web. Naturally, my initial reaction wasn’t a positive one; Double Fine has never developed a sequel to, well, anything. Was this a desperate cash in? An industry-bred desire to follow every successful title with a numbered entry? A disgusting rumor spread to melt the hearts of millions? Nope. It’s a legitimate sequel, tossed into production due to an overwhelming flurry of fan requests. A true, honest-to-Tim-Schafer product of love and ridiculous humor — no doubt a product of Double Fine. 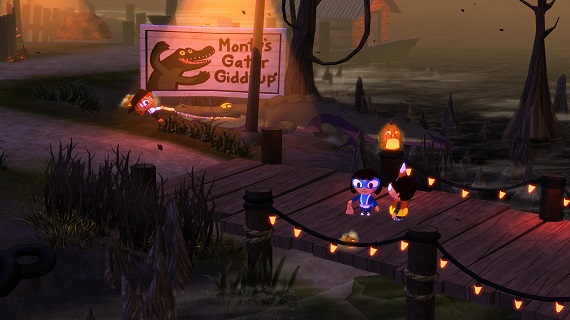 The aptly titled Costume Quest 2 opens right where the last closed — or rather, where the Grubbins on Ice DLC closed. While it certainly helps to have played the original (and I wholly recommend you do), it’s entirely possible to enjoy the experience without ever having heard of the first game. I wasn’t able to grab hold of the controller myself, but Midnight City’s John Kopp — a prince among men — was at the reigns of the adventure, and played the role of tour guide as we explored a sliver of the game I suspect he’s long memorized.

A few minutes in, and notable change number one makes an appearance: skate shoes, the tool once limited to a single costume, is now equipped with every outfit — apparently a much requested feature. This, of course, is exciting news, especially for those interested in experimenting with teams and powers (which should be everyone). The second notable change is far more surface-level, murky and likely to be infested with alligators: the bayou setting. Far from the pines and suburbs of the original game’s locale, Costume Quest 2 takes place in a New Orleans-ish swamps and surrounding areas. Visuals have also been improved, featuring larger expanses of land to explore, more detailed surroundings to admire and, in a classic Double Fine fashion, an abundance of funny to uncover as you peel away at the world.

The E3 demo, as expected, didn’t offer much in the way of real story content. Instead, the goal was finding the remaining pieces of a Clown costume, and after a few short exchanges of whimsical dialog, a silly musical mini-game and some chuckle-worthy encounters with the citizens of what appears to be a town of severely obese people, we were ready to trick or treat are way to some real action. While Kopp wasn’t sharing too much information about the main quest, or any specifics regarding the scope of the adventure, it was mentioned that the game would feature some wibbly wobbly timey wimey stuff, and that the time travel theme would have a role in the central plot. 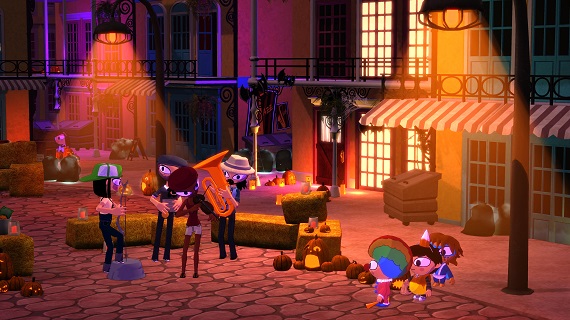 Following in the footsteps of the Original Costume Quest‘s premise, knocking on doors is both vital to progression and the gathering of candy, the game’s primary form of currency. Of course, when candy isn’t waiting on the other side of a rickety door, it’s usually a battle — Costume Quest‘s other major component next to exploration. Combat, as in the first game, is quite graspable for even the lowliest of newcomers, and the same turn-based system makes a comeback with a similar — and seemingly limited — set of options. One such option is the new Battle Cards mechanic, which replaces the Stamps and Treat Cards of the first game, instead offering more incentive to experiment by invoking restrictions on repeated uses of a single power.

Battle Cards can be purchased with candy throughout the game, and feature various attacks and defensive moves. Players won’t be able to rely on a single powerful trick during battle, and will be encouraged by the Cards’ built-in timer to play around with different strategies. Combat itself has been streamlined, too, and made more so engaging with the inclusion of button-prompts. Battling no longer feels like a menu selection simulator, as attacks have a rhythm that requires moderate focus as apposed to mindless clicking.

Costumes, for the uninitiated, are more than simple disguises. Each outfit has its own unique ability, which can often be utilized both in and out of battle. The clown, for example, can heal the party by slipping on a banana peel during combat and making them laugh, while the Superhero uppercuts foes with force. Health, too, no longer regenerates post-battle, and players will be required to find a fountain to sip from in order to replenish any they lose. 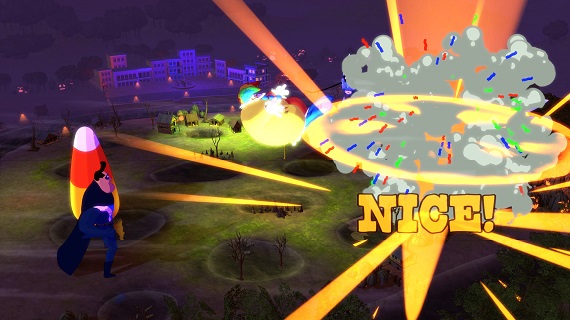 While most of Costume Quest 2‘s changes won’t impact the experience too much, those searching for a proverbial mountain of difficulty to climb are sure to appreciate what I believe — and will defend to the death — is gaming’s most hilarious form of hard mode: the Candy Corn costume, which won’t offer any assistance during battle. Because it’s a candy corn, duh. As a matter of fact, the character wearing it won’t do much of anything at all, instead absorbing damage like a glorified human shield, making snarky comments and jokes, and increasing the overall difficulty by eliminating a useful costume’s spot on the team. There’s even an achievement for those who keep the costume around throughout the game.

Sadly, the gameplay demo wasn’t as long as I’d hoped it would be. What I did see, however, was a blast. I have little doubt that Costume Quest 2 will live up to — and most likely exceed — all expectations. Both Double Fine and Midnight City have given the project a lot of love, and through some kind of video game sorcery have managed to produce it ahead of schedule — a refreshing change of pace in this season of delays. The world presented to me was chock-full of classic Double Fine humor, exciting battles, and enough candy to rot the teeth of a thousand children. If Costume Quest 2 isn’t on your radar, you need a better navigation system