If I had to list my top five SEGA Saturn games, Elevator Action Returns would definitely be included. A much lesser-known import released during the Saturn’s short lived prime, Elevator Action Returns is a sequel to a classic that many old timers know quite well. The original Elevator Action is still easy to come by with fairly recent makeovers on digital platforms, and is still a bucketload of fun (tough as nails too). The sequel however, is a work of art that more gamers need to be aware of.

A bigger, badder, and more fleshed-out sequel in every sense, Elevator Action Returns follows the trend of other similar reboots during the Nineties by taking a classic from the Eighties– or even the Seventies– and bringing it back with a major visual facelift and adding some of that Nineties attitude-filled spunk and edge. Elevator Action Returns takes a very basic template and adds layers upon layers of ingenious mechanics and compelling game design. With the Saturn version released only in Japan and fairly popular there, it’s difficult to come by a reasonably priced copy of Elevator Action Returns these days. But if the Saturn is your niche and you’re craving for an exceptionally brilliant 2D action game which embodies everything that defined the legacy of the console, then Elevator Action Returns is something you need in your life. Alternatively, you could settle for the emulated arcade ROM found in Taito Legends 2 (PS2, Xbox, and PC). 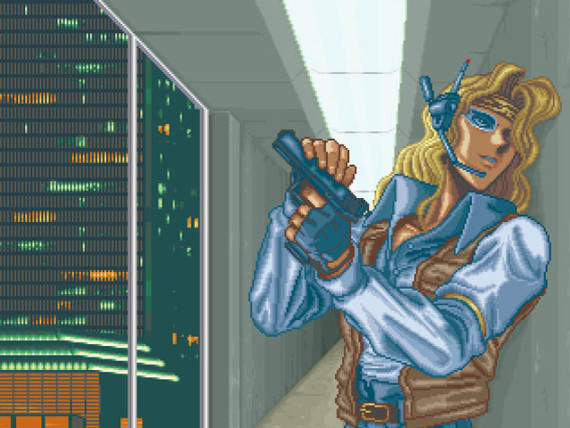 Let’s talk about the visuals first, you look at the screenshots and you think that it resembles something that should be on the Genesis or SNES, and that’s where you’d be wrong because Elevator Action Returns plays off the (then) superior 2D prowess of the Saturn and presents you with some of the most smooth and precise 2D visuals of its era. You have to experience the game in motion to really appreciate the excruciating amount of detail in the character sprites and their animation. At a cursory glance these characters appear to be so very minimalist, but the attention-to-detail crammed into these tiny models and the fluidity in their animation is admirable.  To use an analogy, you know how there are artists out there who are able to paint pictures and even write an entire passage of eloquent calligraphy… all on a single grain of rice? That’s the level of finesse that these seemingly simple character sprites exhibit so strongly. No exaggeration.

Then comes the excellent gameplay. At the most basic level– and in your first few minutes with it– the game will feel much like the original humble Elevator Action. You ride elevators, shoot enemies, and can duck and jump to evade them. However the more time you spend with it the more you discover all its little intricacies and how they all come together to create this incredibly deep and diverse action game. On the surface you’ll immediately appreciate the wealth of cool weapons and bombs that you can play around with, and each weapon serves a compelling purpose in the game design. You’ll also love the tight, fluid, and responsive controls that allow the many little mechanics of your character to simply click and become second nature. The level design is pure genius, you essentially navigate several floors using multiple elevators (expect to see a lot of them, given the title) but it shakes things up in so many ways and doesn’t solely rely on this gimmick. The environments are interactive and can even be used to your advantage. For instance, you’re able to shoot out lights to blind enemies, shoot exploding oil barrels, or even use the elevator to crush unsuspecting enemies. It’s surprising how violent and chaotic the action can get at times. 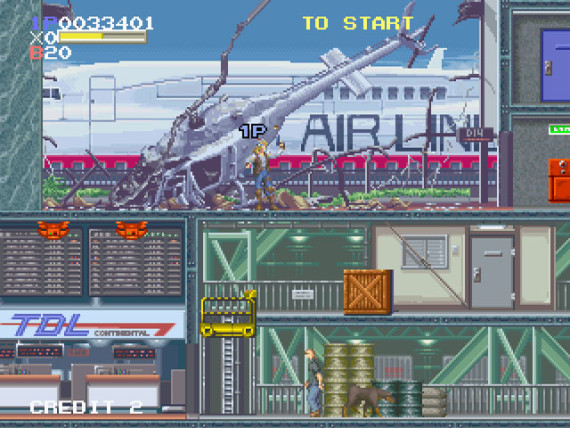 There are countless little intricacies and touches in Elevator Action Returns, from the inertia in the jumping mechanic to the way enemies react to flames to the way you can smartly use bombs. You see real diversity in your character’s maneuverability and arsenal. There’s so much to the gameplay, and with each playthrough you feel like you discover a new way of playing the same old level. The beauty of the game design in Elevator Action Returns is that every inch of the game, be it the little details in the levels, the many weapons, the mannerisms of the enemies, or the numerous intricacies in the basic controls and mechanics… every inch of the game serves a compelling purpose– and put to effective use– in the grand scheme of the design. That’s something very few video games are able to accomplish.

Then there’s the soundtrack, and if you’re a fan of the music in Streets of Rage then you’re going to adore the score of Elevator Action  Returns. It really has an upbeat Nineties cop movie vibe; catchy synth beats, infectious jazzy breakouts, consistently chill piano fillers, and some truly hypnotic bass rhythms. The soundtrack is magical, definitely an exemplar of the kind of unforgettable music that video games were pumping out during that era. 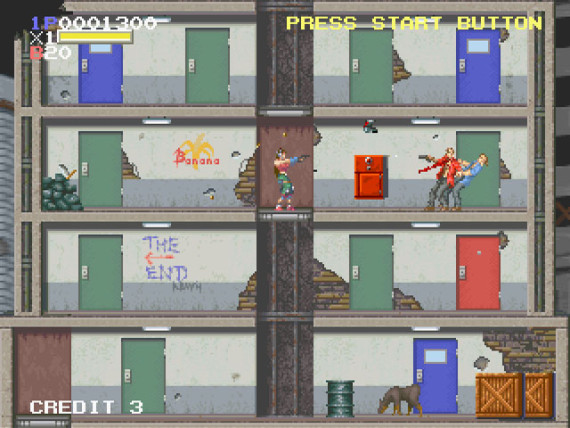