The Playstation Vita is a device that’s almost painful to discuss nowadays. It’s not because it’s bad and not even because it’s not selling up to standard. It’s painful to discuss because of what could have been. What was originally dubbed the Next Generation Portable has been a continuous underperformer here in the West (while the handheld-focused Eastern market is still maintaining interest). The Vita has become a criminally neglected piece of tech, ignored by Sony so much that the company didn’t have a trace of major Vita news at their press conference at E3 2014. But despite this neglect, Sony continues to try and convince us that it’s integral to their market ecosystem, pushing its role as a remote play companion device to the Playstation 4. In honesty, the Vita can succeed as a game system. It can also succeed as a remote play companion device. The problem is that Sony’s promotional talk and actual sales practices are constantly conflicting, and that hesitance to fully commit to direction is why the Vita is continuing to nosedive in sales and consumer interest.

The Vita was supposedly Sony’s second coming to the handheld scene. While the PSP fell from challenger to distant second-place against Nintendo’s DS, the Vita was Sony’s self-proclaimed evolution. The Vita, originally dubbed NGP, was teased as one of the most advanced handheld gaming devices ever, decked out with almost every control scheme and software feature you could ask for. Add in some gorgeous graphics on that huge screen and you have a contender. When the original price was marked as $249, identical to Nintendo’s 3DS at the time, it appeared that Sony was going all in against the kings of handheld gaming. But the Vita’s early hype faded astonishingly quickly. The lineup was plagued with a number of lackluster ports and gimped franchise installments. For every awesome Vita game we got like Uncharted: Golden Abyss or Mutant Blobs Attack, we got a handful of Army Corps of Hell and Little Deviants. The Vita support evanescently disappeared in an embarrassingly quick manner, and while we got some great fun in games like Killzone Mercenary and the fantastic Tearaway, it became clear that the Vita was not on Sony’s minds, even less than the PSP was at the same point in its life cycle.

This past week, Sony announced that they’re limiting the number of first-party titles that will be developed for the Vita. At that time, the Vita was already struggling enormously, as its only major supporters were a number of skilled, but obscure Japanese developers and the indie crowd. Both of these groups were producing some great games for the system, but without Sony’s first-party titles leading the charge, the system felt extremely neglected. Sony cited their decision as a way to focus on Vita’s compatibility with the Playstation 4’s Remote Play feature. This left many Vita owners high-and-dry, as first-party exclusives are what drive sales of any great system. Sony wanted to stop treating the Vita as a game system as more as a companion device for their extremely popular PS4 system.

Quite frankly, treating the Vita remote play feature as such a crucial component to the system’s appeal is not an inherently bad idea. The Vita is astonishingly capable of having PS4 games streamed to it; there’s definitely a sense of spectacle in playing a game like Killzone: Shadow Fall on your Vita, or even something as simple as Resogun. The system isn’t too demanding as far as wi-fi signal fidelity, so lag is incredibly minimal when in practice. With Playstation Now on the way, the library of potential games to stream is growingly exponentially, so there’s definitely appeal there. Even better is the Vita’s capability as a second screen device, similar in design to the Nintendo Wii U’s Gamepad. It’s already proven to be compatible with second-screen gaming like in Deus Ex: Human Revolution – Director’s Cut on PS3. The Vita seems like the perfect companion for remote play, and from what it’s demonstrated, it does that task incredibly well.

But there’s one major problem that Sony is consistently flubbing up in their push for Vita as a companion device. One single factor is completely wrecking the chance for the system to thrive under these conditions, and it’s this: Sony might be marketing the Vita as a remote play companion, but they’re selling it as a game system. A 200 dollar game system. 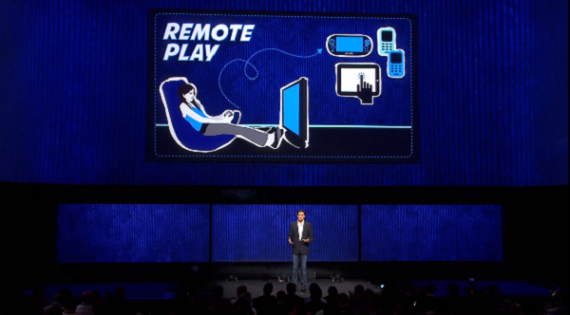 Companion devices should not be that expensive. That’s the price that someone buys a dedicated gaming device for, one that has provided a steady, comprehensive stream of content that can be used as a way to market the system itself and not the feature it happens to be compatible with. The Nintendo 3DS is marketed and sold as a gaming system, with a strong library of games that demonstrate creative game design and addictive digestibility, with some multimedia features like Netflix along for the ride. Sure, it’s a relatively steep price at around $180, but it’s a standalone device that can provide a huge amount of content without any other device or console daisy-chained to its backside. That is a game console. The Vita’s library is so slim and its dependence on the PS4 for its appeal is so thick that it doesn’t have standalone appeal anymore. Even with indie and Japanese third-party support, the game system can’t make a convincing argument to the masses. This makes Sony’s push for Vita as a remote play device a logical one in terms of business direction, but at that price point, it’s just not enough to give Vita true appeal. As a standalone console, the system doesn’t have the library to be worth it, but as a remote play companion, the system would be great, though it’s being held back by an incredibly unpalatable price tag. Sony refuses to take that last step away from “game system” appeal and to full on “companion device” appeal, and it’s costing them dearly.

But think of a Vita fully based around streaming media, whether it’s games, movies, music, any kind you need. It would still have all of the control features the system has always had. It would still have compatibility with the typical memory cards and still have that beautiful display. But it wouldn’t have a physical media slot, being fully focused on streaming media. Without that taxing physical media hardware, the system’s manufacturing cost would be cut down significantly, allowing for the device to be sold at a much lower price point. $200 is far too expensive for a remote play companion, but $125 or even below $100 is not. What you’d buy is essentially Sony’s version of the Wii U Gamepad, custom-fit with a price point to match and the ability to take full advantage of the exciting new PS Now streaming service. If Sony is to really convince everyone that the Vita is worth buying for its remote play abilities, they need to sell it like one, low price point and all.

Sony’s indecision is what is truly hurting the Vita. They want to sell the Vita at the price of a game system, but they aren’t supporting it like a game system should be supported. With barely any first-party support and a downright dependence on indies and Japanese third-parties to make the system appealing, Sony has done next to nothing to make the Vita into a viable system that can even come close to the Nintendo 3DS. But if they really want to make the Vita into a remote play companion that’s worth buying, they need to treat it like one not just by promoting the remote play feature, but by giving the system a price point that’s accommodated to that purpose. A cheaper Vita fully focused on streaming with PS Now makes a lot of sense with Sony promoting PS Now so much, and with an entire history of legacy games on the way, now’s the time to flaunt the Vita’s compatibility with their streaming service. But that price point, that single number is what is turning gamers away from really embracing the remote play ideology that Sony is pushing onto the Vita.

Sony needs to make up their minds in what they want to do with the Vita, and instead of keeping one foot hanging on one side of the fence, they need to decide and fully commit to their plan of selling the device, because this lack of conviction is turning one of the best pieces of handheld hardware on the market right now into a mockery of the revolution we gamers were promised three years ago.