Rhythm games seem to be coming back in a way quite different from their plastic peripheral rise.  This time around it appears gamers want simpler rhythm and music experiences — often on handhelds. Arc System Works, best known for Guilty Gear and BlazBlue, have brought Magical Beat to the Vita. This download-only title brings together classic puzzle gameplay with music to create a fun, challenging little game.

The basics of Magical Beat should be familiar to anyone who’s played Tetris, Puyo Puyo, or basically any other block-dropping puzzlers before. The player receives groupings of three small cubes and hopes to match three of the same colored blocks when they land. By doing so the same-colored blocks that are touching will be removed from the playfield. However, they stick around for a little bit, meaning if you can get more blocks of the same color there in time that they’ll all disappear together. 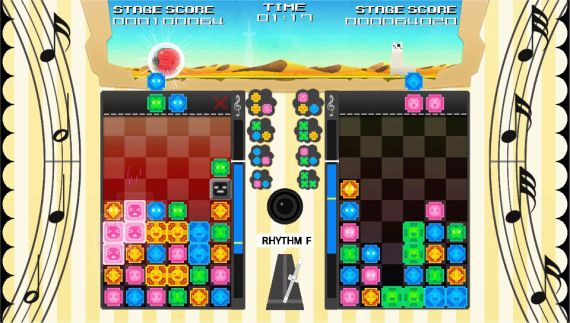 So, where does the whole rhythm aspect come in? Every stage has a song playing along with it. Each song has its own respective BPM (slow, fast, etc) and your goal is to drop blocks on the beat. If you don’t then the blocks scatter randomly around which is awful. The non-rhythmically inclined can simply look at a meter on the right which shows how to best time block drops. Holding onto the same blocks for too long also just makes you drop them, so getting accustomed to the beat of each track is mandatory. This becomes tougher than might be expected as the enemy loves to toss black blocks on your field to make matching them even harder.

It might be surprising just how tough Magical Beat actually is. There is a beginner difficulty, but even that expects players to be able to keep the beat while being pretty good at block placement. However, this is nothing compared to what normal mode requires. In order to beat it, and unlock additional songs, you must contend against two very unfair opponents with a super fast BPM song. This is after beating the previous eight songs of ten to complete normal. Rhythm masters who complete this mode are free to challenge themselves with hell mode which is, predictably, an even tougher version of the game. 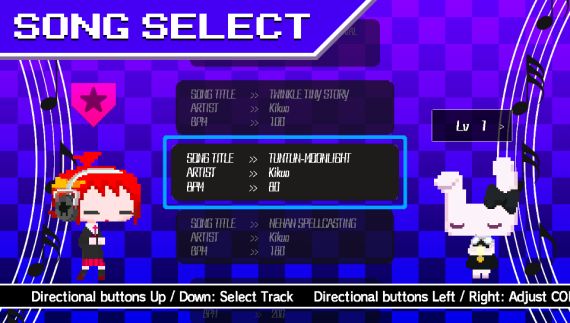 Thankfully, you don’t ever have to beat normal or hell to enjoy the game. There are seventeen songs available before unlocks and each are created by the artist Kikuo. Kikuo is a very popular name in the Vocaloid music scene, which means these tracks all have a Hatsune Miku flavor to them. When in free play mode you’re able to select a song, character, and difficulty of opponent. Once you do beat normal then you nab ten songs from the Guilty Gear and Xblaze games. The game also has DLC for even more tracks, although at the time of this writing none were released. Unfortunately, it seems that many fan favorite songs have been relegated to DLC purchases rather than included in the base product. Considering the base songs are likely to wear out after a while it makes store purchases awfully alluring.

The core mechanics of Magical Beat are quite simple – if tough. There’s not much more to explore with the experience though, as this is budget release. You can play against friends but only via ad-hoc (locally) and there’s not even a leaderboard available. The experience feels decidedly bare-bones even when compared to other music titles. In most others you would at least see puzzle modifiers, minigames, or even just alternate skins (which are immensely useful for some colorblind players) but none of that’s present here.  However, its rare to see rhythm games lately that actually require some mastery to get the best out of them. Players who fall for this title’s gameplay hook will end up playing for hours as they work toward completion. 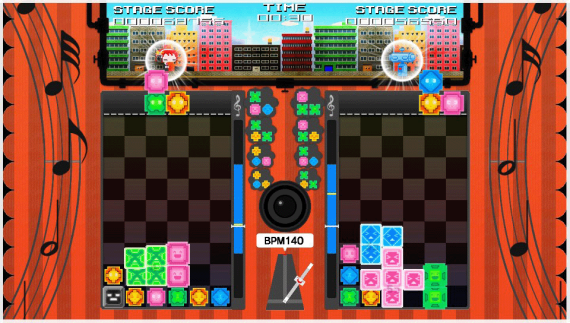 Magical Beat is a basic rhythm-based puzzle game that exists thanks to similar titles like Lumines and 0D Beat Drop. Although it provides fun in small doses, the difficulty quickly ramps up in a way that requires patience to progress. Hardcore puzzle fans, however, should not pass it up for exactly that reason. Yes, the game is rather small in scope, but it’s also only ten dollars. Give it a shot if you’re a fan of Arc System Works or Kikuo’s musical stylings and are ready for a rhythmic challenge.