If one were to make a list of the most prevalent video game tropes, war would win in a landslide. War shows its hideous head in numerous forms: small scale skirmishes, massive international conflicts, apocalyptic showdowns, and science-fiction-based engagements. Our favorite player-characters fight using bullets, explosives, and plasma all under the veil of rage-filled loyalty. Turning conflict into a game is not only entertaining, it’s downright jovial. Games about the violence of war are commonplace, plain and simple. What’s truly as scarce as hen’s teeth is a game that puts hands-on conflict aside to focus entirely on the people that violence affects. 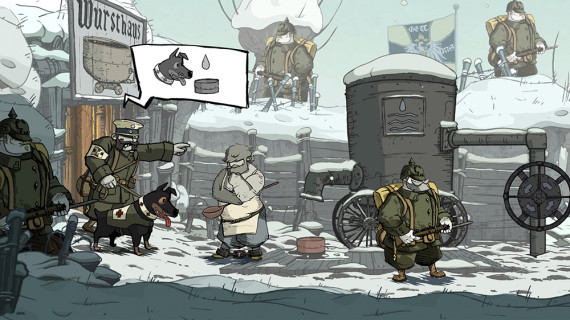 Enter Valiant Hearts: The Great War, the latest in a rapidly growing array of wonderful UbiArt Framework titles. Developed by Ubisoft Montpelier, Valiant Hearts tells the story of the rarely-covered World War I through the eyes of four playable characters, one non-player character, and the helpful canine that comes in contact with all of them. It depicts not only the horrors of one of the most unfathomably brutal conflicts in world history, but the most chilling effects war’s brutality can have. Countless disfigured bodies and piles of rotting corpses are certainly staggering, but seeing families ripped apart by a war’s inherent uncertainty finds a way to rock the player to their very core. Though its gameplay is considerably weaker than its epic, beautiful narrative, Valiant Hearts: The Great War is a journey that every gamer should embark upon.

The story begins shortly after Franz Ferdinand’s assassination triggered the events of World War I. As Germany and France begin mobilizing their troops, we see Karl, a young, blonde German gentleman living in France, taken away from his wife (whose diary tells her side of the story)  and newborn son. His father-in-law, Emile, is sent to fight in the French Army, thus beginning the player’s journey back and forth across the lines of the war. In addition to the two aforementioned characters, players take the role of Freddie, an American who joined the fight long before his country did, and Ana, a hopeful veterinarian-turned-nurse whose goal is to heal the wounded, regardless of their allegiances. Each character eventually comes in contact with a helpful medical dog that changes how players interact with the world around them. Players bounce around between the four playable characters, taking part in missions that may initially seem disconnected, but end up weaving together in brilliant fashion.Valiant Hearts never worries about taking sides, as this is a character-driven narrative experience first and foremost.

Though Transistor, Entwined, Wolfenstein: The New Order, and South Park: The Stick of Truth are firmly entrenched (no World War I pun intended) in the “Best Ending of 2014” race, Valiant Hearts: The Great War might take the cake. Without spoiling anything, the conclusion is an unfathomably beautiful way to wrap up an incredibly emotional ride. The final ten minutes build up your spirits, break them down, make you smile, and bring tears to your eyes. Valiant Hearts: The Great War finds a way to be undeniably saddening while making the player undoubtedly proud. Every second of the game’s eight hour journey becomes instantly justified upon its conclusion, making it worth every penny of its asking price. This is the type of ending that will stick with you for years to come, as it pushes the limits of how emotional video games can be.

Though it is gripping enough to warrant your attention for the duration of its story, Valiant Hearts: The Great War‘s gameplay is considerably weaker than its phenomenal narrative. Technically a puzzle-adventure game, its puzzle design and level of mental-taxation fall somewhere between Scribblenauts Unlimited and Stick it to The Man!. Its light point-and-click elements are never too difficult, and its action sequences will never require more than a couple of attempts to conquer. On one hand, this light level of challenge is great, as it allows players to progress through the story, easily the game’s most important aspect, without any major stumbles. However, at times the gameplay holds the game back, as Valiant Hearts can give off a distinctive “just going through the motions” vibe. Every puzzle involves interacting with various objects in a certain order. Use X-object to get Y, use Y to get Z, use Z to move onto the next area. Sure, there might be the occasional pipe-puzzle or hidden safe combination here and there, but these are also put in place to acquire a given necessary item. The dog, who rears his head during a number of the game’s missions, can enter areas humans cannot, sneak by curiously unsuspecting enemies, and fetch out-of-reach items. Escorting your canine companion around neither adds to, nor subtracts from the game’s challenge, as he is more of a storytelling device than a depth-adding gameplay element. The game’s puzzles are never outright bad, but they’re never outstanding either. Luckily, some character differentiation and entertaining action sequences are thrown into the mix to raise Valiant Hearts‘ gameplay bar.

Each character has a specific function that allows them to attack various situations in different ways. Freddie is a hulking brute that can smash through barriers much easier than other characters, allowing him to lead the charge on various battlefields. Emile possesses a shovel, giving him the ability to craft paths for himself and his followers through soft soil. Karl, though he sometimes has a musket he cannot shoot, differentiates himself by frequently switching outfits to access previously closed off areas. Ana has easily the most unique special gameplay ability, as her rhythm-game-esque healing sequences feel distinctly different from any other aspect of the game. Granted, sometimes these sections feel poorly contextualized (the best example of which being a moment where she pulls a bullet out of the side of a chlorine gas victim to cure them), but this small complaint is largely overshadowed by the tension of trying to heal the wounded as quickly as possible. Some of these characters will go through fast paced stealth sections where they avoid gunfire or spotlights, some will have to avoid falling missiles, and one (in Ana’s case) will have to drive a taxi and avoid various obstacles in her path. These driving sections are easily the highlight of Valiant Hearts‘ gameplay due to their Rayman-like musical obstacle timing, as the frequency and appearance of bombs, bullets, and barrels is completely based upon the beat of a song.

It’s something the gaming world should come to expect by now, but the UbiArt Framework’ truly allows the beauty of Valiant Hearts: The Great War to shine through constantly. Just as Child of Light appeared to be a playable watercolor painting, Valiant Hearts is almost like a playable version of the world’s most detailed Sunday comic. Pencil-drawn lines are evident, and vibrant colors permeate every inch of the game’s environment. The art-style does an unbelievable job of infusing joy into the game’s happiest moments while never taking away from the atrocities of the battlefield. Valiant Hearts‘ cartoon aesthetic allows players to view death as horrifying rather than grotesque, as its light-hearted, hand-drawn style never allows violence to feel out of taste. A stunningly beautiful game on both consoles and the Vita (it is one of the best Remote Play titles to date), Valiant Hearts shows us why the UbiArt Framework is one of the best development engines in today’s gaming world.

While the UbiArt Framework logo at the beginning of the game should be a clear sign that Valiant Hearts is visually beautiful, its breathtaking, unforgettable narrative comes somewhat as a surprise. While its occasionally dull gameplay and noticeably low level of challenge prevent it from being a masterpiece, Valiant Hearts is one of best games a Ubisoft studio has created in recent history. This is a title that will make quite a few people cry (including this particular reviewer), as its sublime conclusion serves as a testament to how far gaming narratives have come. While Ubisoft has shown that it can deliver outstanding blockbuster AAA titles, its growing library of unique downloadable games should put EA and Activision on notice: this is how to be creative.