Every week I receive emails from indie developers asking me to take a look at their games. I love this part of my job, but many of the games that get sent my way just aren’t worth covering. A lot of indie developers promise things they can’t possibly deliver. So when I received an email from the CEO of Rival Games claiming their upcoming cop adventure The Detail is “where Telltale’s The Walking Dead meets HBO’s The Wire,” I was more than a little skeptical.

But I’ll be damned if Rival Games haven’t managed to pull it off. 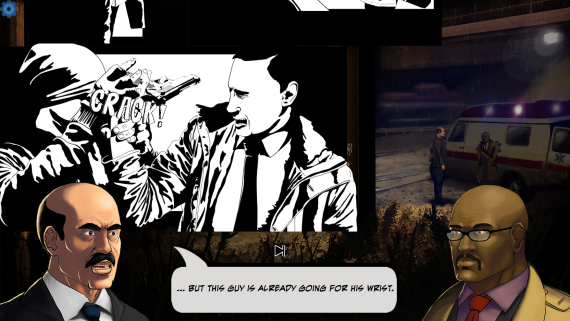 The game does have its share of weaknesses – its art is inconsistent in quality and doesn’t animate particularly well, and its interface needs a bit of refinement – but its strengths more than outweigh them. Dialogue is punchy and does a good job of emulating the tone and pacing of classic cop dramas. Your choices with are mired in moral ambiguity of the sort that made The Wire shine (do you offer a scumbag pedophile a reduced sentence in exchange for finding his missing victims, or try to beat the truth out of him before his lawyer arrives?), and the number of possible outcomes appears to be quite vast.

While the execution of The Detail‘s artwork leaves a lot to be desired, it certainly has an arresting style. The hand-painted look used for the point and click segments is detailed, but not outstanding. In cutscenes, however, the game takes on a stark black-and-white comic aesthetic reminiscent of Sin City. “Panels” of the “comic” don’t really have strict borders, and they slide around the screen to give a dynamic sense of action. Even without voice acting, this style of presentation adds a lot of oomph to the dialogue. Fantastic, tense music helps to cement the game’s gritty atmosphere. 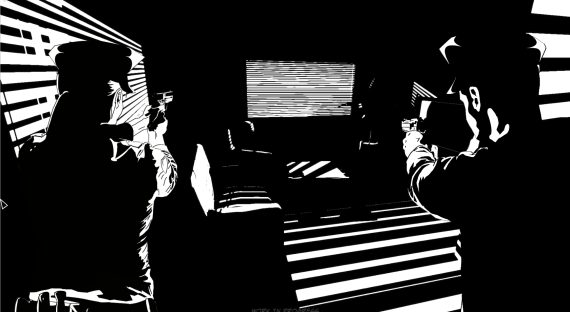 Though in need of polish, The Detail gets it right where it counts. With a solid script and gripping presentation, it could go toe-to-toe with the best of Telltale’s catalog. It remains to be seen if Rival Games can keep this up for the duration of a full game, or if they can deliver a deep branching narrative with a longer running time, but what they’ve shown so far is promising. Assuming the rest of the game manages to live up to this short demo, it will be a strong contender for adventure game of the year. If you’re looking for a title packed with compelling drama, you should head over to The Detail’s Greenlight page and show Rival Games your support.