For years, zombies have been among the most loved villains in video games. The concept never seems to grow old and gamers never turn down the opportunity to dive into a new undead adventure. Z-Run takes the zombie genre and combines it with another popular one, the endless runner. Both concepts have been around for years and it’s quite surprising that it took this long for someone to think of this idea. Mutilating zombies is already fun. Mutilating them in an endless runner on PlayStation Vita, however, sounds like a dream come true.

In Z-Run, players choose between a male and female antagonist before being dropped into a Japan taken over by millions of zombies. Since the world is infested, players have no choice but to dodge, kill and run their way to safety in each section of the city. 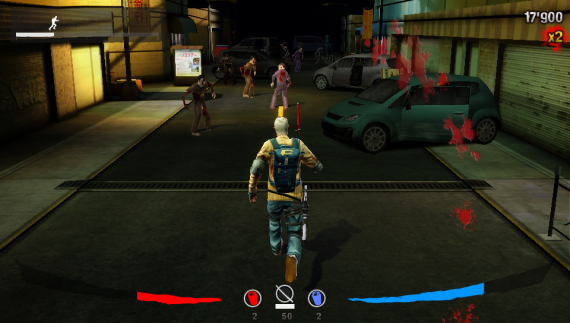 The city map is divided into several areas allowing you to choose the route you take. As you run through the city streets, zombies attempt to grab you which takes a substantial amount of health away. You’re given a health and stamina bar. The health bar can be completely depleted with only a few touches from the hordes of zombies, while the stamina bar is used any time you sprint, uses a weapon, or do a slide attack.

The stamina bar is extremely important because you move in slow motion and cannot sprint once depleted. This leaves you vulnerable to zombie attacks and more than likely, a bloody death. Weapons and items are strategically placed throughout the city streets and can be obtained by just running through them. Certain items prove to be useful, such as the blue and red cola bottles which replenish both health and stamina bars. Z-Run has a full complement of weapons which become stronger through leveling up. Bats, wrenches, swords and shotguns are just some of the many weapons found during the adventure. 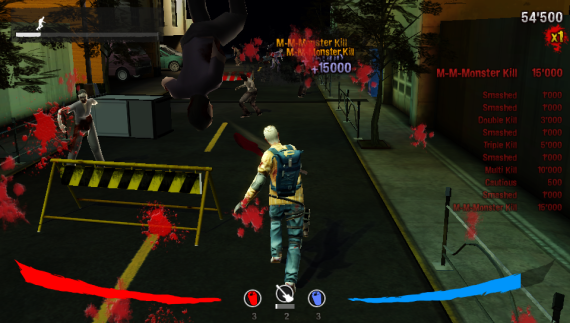 Certain weapons are better than others, but be cautious how often you use them, because they lead to the draining of the stamina bar. A slide attack can also be performed that wipes out zombies in multiple numbers. The command button for the slide can be held down to initiate a longer slide. The more zombies taken out in one move, the more money stacked which leads to a great score at the end of the level. Money proves to be very useful in Z-Run, leading to rewards at the end of each level.

The cash can be used to upgrade character attributes such as stamina, vitality, recovery and several others. Checking the abilities section to see if there are available upgrade points after passing a level or even after dying is a good idea. Leveling up the character decreases the difficulty, but the weapons and abilities are what will help get you through the zombie apocalypse. 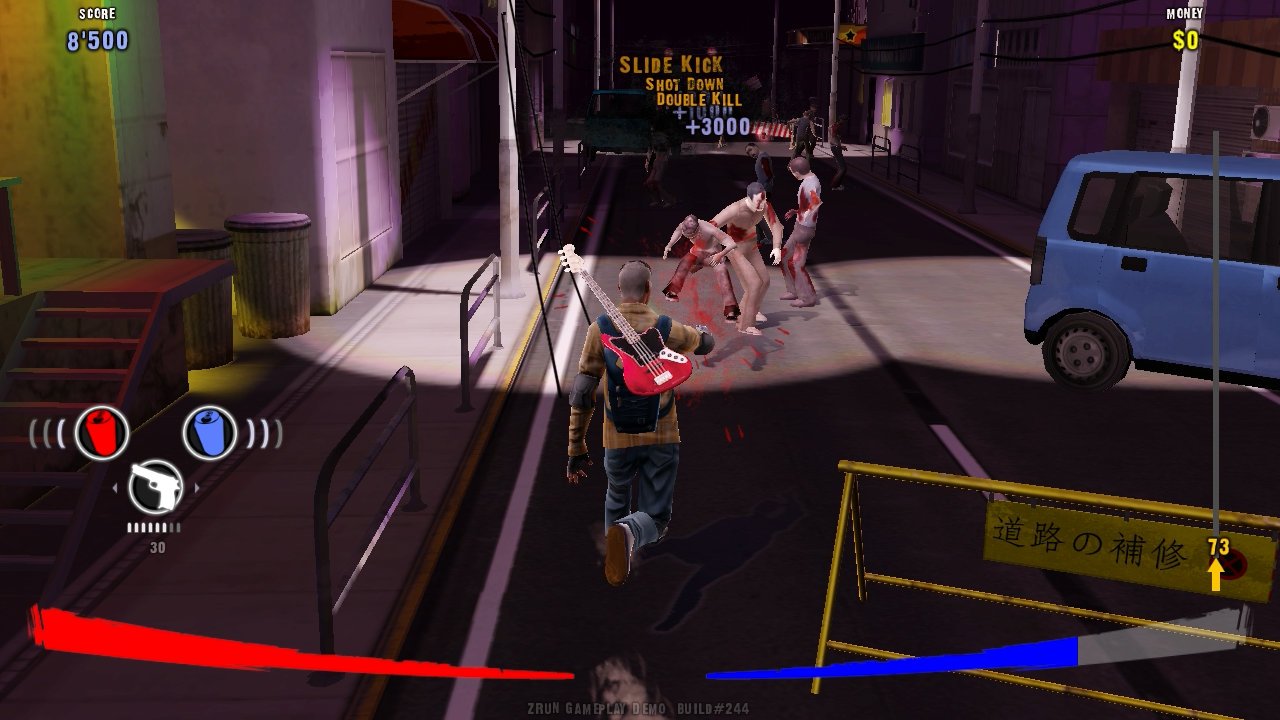 Z-Run falls short in level design. All levels and areas are similar in design and don’t provide any sense of game progression except for the fact they become harder as you go on. The streets and buildings all look the same and the zombies only have a few designs. Even though players can choose directions for the levels they wish to play, without any distinct differences, picking which direction to go towards becomes somewhat irrelevant.

The weapons system is mediocre at best. The weapons only last for a certain amount of hits. After the durability of that weapon has expired, your best bet is to pick up another weapon while running on the streets. Despite all the crazy weapons such as guitars, the most useful weapon is the slide kick that your character begins the game with. This attack is quick and can eliminate multiple zombies at the same time. There’s also a melee style kick at your disposal,  but if the kick is not started at the right moment, the zombie will grab you and extract a great deal of health from the health bar.

Z-Run also contains a survival mod similar to the campaign. This time around, however, you’ll will have to survive as long as possible until your health bar runs out. This mode quickly grows tiresome as the playable levels are the same completed in the campaign. The biggest reward for survival mode are the leaderboards, which are hardly a perk. With the price tag of  Z-Run being more on the expensive side, the expectation for content was left unfulfilled. 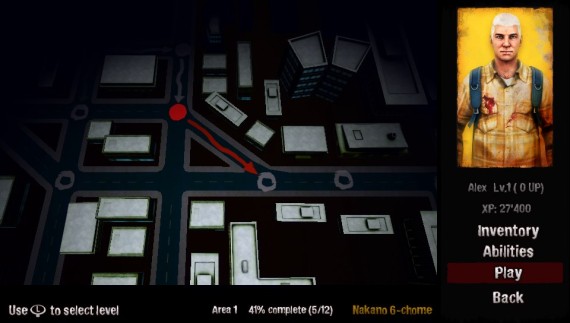 Z-run’s combination of zombies and endless runners was undoubtedly a brilliant idea. Unfortunately, the game design, fun factor and replay value were all poorly executed. It makes great use of the PlayStation Vita’s screen, but the graphics are average and the gameplay tedious. High on price and low on content, Z-run is all grab and no bite.