While a large number of video game characters hold a special place in our hearts, it would be an absolute pain to hang out with most of them. Our favorite heroes and villains break everything, speak out of turn, and generally have abysmal social etiquette. Birthday parties, celebrations centered entirely around one person, are some of the most disaster-prone social gatherings known to man. One small misstep can brand you as the “person who ruined my birthday” for all eternity, leading you a social pariah with no friends for the rest of your life. Just in case you have the opportunity to invite a completely fictional being to your birthday party, here are four video game characters that you shouldn’t touch with a ten foot pole.

Ah, presents, the greatest part of any birthday. While the gift-giving of your nondenominational holiday of choice is (allegedly) based upon “the spirit of giving,” birthdays are all about unadulterated selfishness. Every year you have piles upon piles of crap you don’t need wrapped in colorful dead trees ready to be ripped apart with your savage fingers; it’s fantastic. Nothing would be worse than a hairy, shirtless lunatic spinning into that stack of boxes and obliterating them. Crash Bandicoot’s patented spin-attack would not only ruin the best part of your birthday, but it would instill annual fear into your soul. Until those packages are open, you never know whether or not your presents will wind up as a colorful mist of airborne pulp.

I like cake. You like cake. Everyone likes cake. Nothing says “awesome birthday party” quite like shoving sugar-coated sugar bread into your face hole. Hell, cake is such an important part of any birthday celebration that we light it on fire only to have the birthday honoree put out the flames in an act of staged heroism. You know what ruins birthday cake? People who hog it. Enter Fat Princess, the star of the self-titled PlayStation 3 multiplayer CTF game. One of the central mechanics of Fat Princess is shoving pounds and pounds of cake into the eponymous character’s face, thus making her harder for opponents to carry. What do you think Fat Princess would do to your dinky vanilla-frosted morsel? The cake that your mother pretended to spend an entire day baking (when in reality she downed two bottles of wine, watched a season of Desperate Housewives, and stumbled into Dairy Queen to pick up the last car-themed cake without a thumbprint in it) would be gone in a flash. It would be like inviting Eric Clapton to your coke-tasting soiree.

Speaking of birthday cake, what happens when you don’t have a lighter to turn it into a fire hazard and infuse it with tasty, tasty wax? You go searching around the party for that one sad smoker without any friends, only to borrow their lighter and forget to give it back. Then they start itching themselves because they can’t leave a boring social event to fill their lungs with fresh Marlboro tar. It’s a no-win situation. Now, if you happen to invite Samus to your party, you might think, “Hey, she has a giant plasma beam on her arm! I can leave Uncle Seymour alone to chain-smoke 27’s in our driveway!” It’s a brilliant idea until Samus charges up her arm cannon and obliterates everything within a 25-foot radius of the cake. Want to keep your family and friends alive and not crispy? Let Samus hang out by herself on your special day. 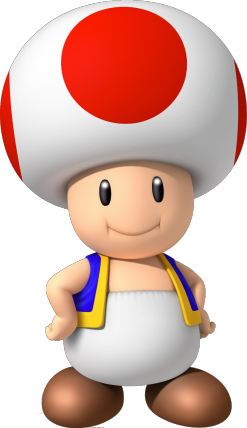 “Dude, seriously? Why would you bring your annoying toddler to this birthday party? First of all, it’s a birthday party for a teenager. Secondly, us adults are trying to peacefully enjoy large glasses of hard liquor, I mean martinis! Congratulations, you just ruined my entire weekend.” If you want to avoid some sort of confrontation like this, refrain from bringing Nintendo’s favorite diaper-and-vest-wearing mushroom baby. Sure, his new catch phrase is absolutely adorable, but that doesn’t mean he won’t be the most obnoxious guest of all. Unless you’re attending a fellow toddler’s birthday party, don’t bring the creature that just learned his first seven words. No one cares how much fun you’re having Toad, there’s no need to shout “Wahoo!” every four seconds. Sit down in the corner, enjoy some chips from the serving bowl that everyone’s nasty booger fingers have been dipping into, and be quiet.