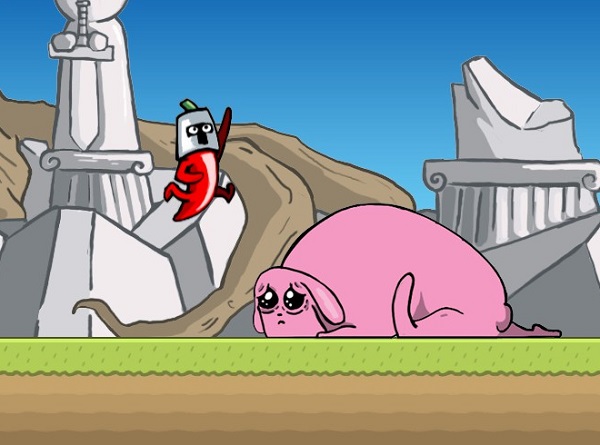 One of my favorite movies of all time is the Christopher Nolan film Memento. The film pioneered an alternative storytelling method by intentionally structuring itself in reverse. The first scene in the film ends up being the last scene in the film’s story. That kind of post-modern presentation is why Spoiler Alert is such a creative experiment. Following similar structuring of “first being last,” Megafuzz’s newest title begins with the final scene and forces the player to play the entire game backwards. You must un-kill enemies, un-collect items, all while seeing how the story began. While this novel interpretation of games is a creative endeavor, Spoiler Alert is fundamentally flawed in presenting itself as a game, all while giving nowhere near enough content for players to chew on. 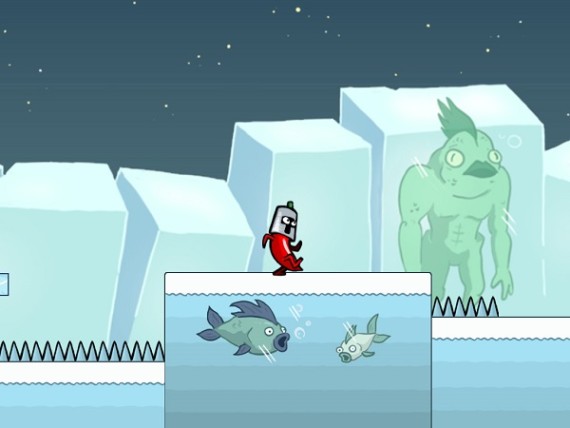 Spoiler Alert follows a chili-pepper-like protagonist who, right when you start the game, approaches the end of his journey to liberate a princess from a giant monster. Right as the two exit the screen and the credits start rolling, the game pauses and starts rewinding itself. This is where Spoiler Alert truly begins: at the end. The whole idea around Spoiler Alert is to play the entire game in reverse. You move backwards in time, from right to left, but that’s not the only twist. A major component of the game is to completely emulate your journey from finish to start, which means that the things you did up to that point must be replayed backwards; otherwise, you’ll fail due to a time paradox. If you see a defeated enemy in the ground, you must jump on it to re-enact the forward act of destroying it (otherwise, you’re doing something in reverse that didn’t happen forward). And enemies aren’t the only ones affected. Things like coins, hazards and even power-ups must be re-earned in reverse to dodge looming time paradoxes. It’s a very creative idea and it’s pretty impressive how Megafuzz were able to plan this game in this fashion (especially with such an intelligent and funny ending/beginning). 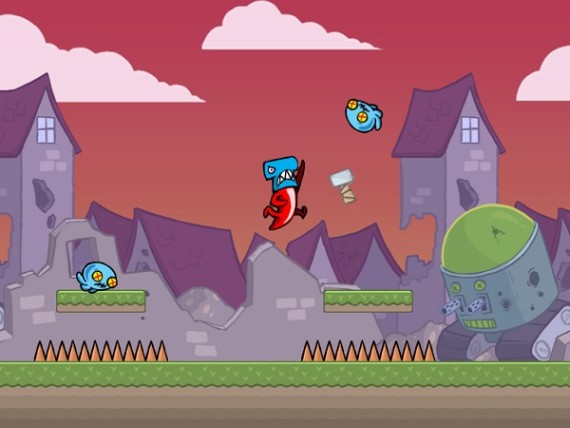 But the inherent idea of Spoiler Alert, re-enacting past events to avoid time paradoxes, is extremely flawed for one reason: you are forced along a set path. Since you must redo things in reverse to avoid paradoxes, any diversion from that path will instantly bring a failure. If you see a dead enemy, you must jump on it. If you see the afterimage of a coin or power-up, you must un-collect it. Failing to do so will be changing the past, which nets a paradox. This makes the game extremely limited; there’s literally no other way to progress. You must complete the game in a single fashion, with any other way being prohibited. While it definitely flaunts its creative concept, Spoiler Alert is absurdly restrictive in how the player completes a level, requiring you to jump at a single correct time or fail the level. What it boils down to is a “do it this way or fail” mentality, the same mentality of a quick-time event. That’s what Spoiler Alert is: a giant quick-time event.

And aside from that limited gameplay structure, Spoiler Alert doesn’t control very well either. Your hot pepper hero has a very delayed jump, and while enemy hit boxes are wide enough for lenient attacks, it makes a number of platforming sections very frustrating. Some gaps are annoyingly wide and difficult to navigate, but the worst part of the controls comes from a number of enemies which require multiple hits to avoid, requiring you to attack once to bring them back to life, and another to “re-arm” them. These enemies require you jump at just the right time after bringing them back to life; the collision detection is obnoxiously limited here. This is all made even worse by the inability to stop running. Since you’re recreating past events, you’re constantly running with no way to take a rest and plan some kind of strategy. You’re forced along each level with only two options: jump at the right time or fail entirely. 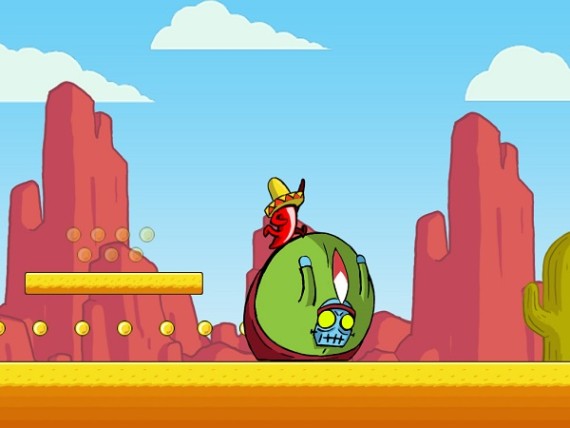 What is easily the worst part of Spoiler Alert is its length. This is an absurdly short game. I finished all 100 levels (all of which are micro-short and can take mere seconds to complete) in less than an hour. The game offers some curveballs like a level editor, but it’s not nearly as interesting as the traditional platforming stages. The paltry amount of content and the brevity of each stage are insane, because there are so many creative ideas that are left un-presented. The idea of playing a game in reverse (while fundamentally flawed) is a creative one and there are so many ways to twist the concept with new enemies, hazards and levels. Spoiler Alert stops right when you’re expecting more. The ways to use this creative idea well are near infinite, but the short stages and sparse challenges make this game’s replay value extremely low.

Spoiler Alert does, however, have a nice graphic design. Kitsch and playful, the weird animation of the protagonist pepper is entertaining, perfectly stylized like an old-school flash cartoon. Enemy animations and environmental hazards take cues from the era of Newgrounds, with expressive designs and colorful aesthetics. It’s a shame, though, that the game levels are so short and sparse. Audio is expressive as well, with some catchy tunes that don’t grate on your patience, though some sound effects (like the pepper’s death call) tend to get obnoxious after a while. 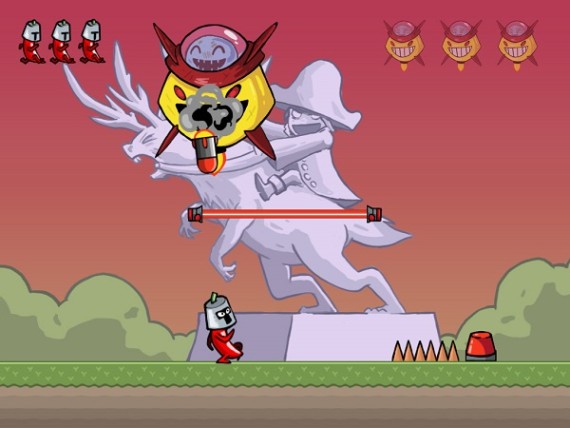 Spoiler Alert is a creative idea that simply doesn’t work in a game medium. Its forced progression takes a tremendous amount of control away from the player, removing any option to reinterpret strategies or experiment with how to get past an enemy or trap. With no open-endedness to speak of, the game is narrowed down to a quick-time event built around a rather intriguing idea. But the terribly small amount of stages is what really destroys it, as the player isn’t given enough creative ways to use the “reverse platforming” before the game is over. The 100 stages given are okay, but there should’ve been more. Many more. It’s a shame, because Spoiler Alert is undeniably creative, pushing interpretation of game design into truly uncharted territory. But this is a medium built around interactivity and Spoiler Alert is a restrictive on-rails experience that doesn’t give nearly enough power to the player. As innovative as its main concept is, Spoiler Alert abandons the inherent interactive element of video games, with only a terribly linear and bleak experiment still in tow.