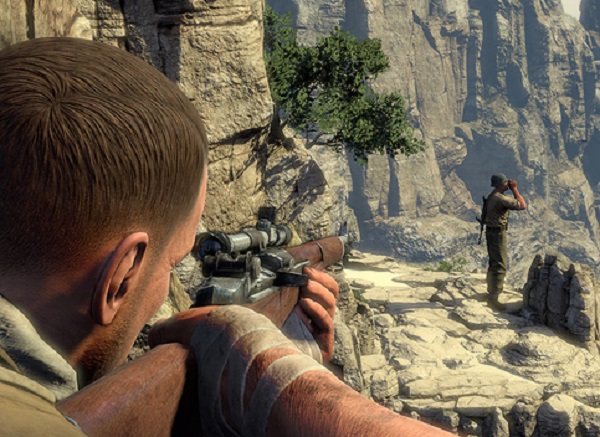 When developers play it overly safe, two things automatically happen: the game’s ceiling gets lowered and players generally feel underwhelmed. Enter Sniper Elite III, the prequel to Sniper Elite V2, the part-remake part-sequel to Sniper Elite (it’s not just you, the series history is somewhat perplexing in general). Though it is arguably the best place to experience long-distance military gameplay, nearly every other aspect of Rebellion Oxford’s skull-popping third-person stealth shooter leaves something to be desired. The video game equivalent of a pretty decent birthday present wrapped in six-year-old newspaper and duct tape, Sniper Elite III finds a way to feel both exciting and dated at the same time.

Sniper Elite III‘s decidedly bare-bones narrative (which can be completed cooperatively with another player) details the exploits of OSS sniper Karl Fairburne, 2014’s blandest protagonist, during World War II’s North Africa campaign. Our hero, colloquially known as the “Desert Ghost” is tasked with single-handedly bringing down a power-hungry German general and his rapidly growing arsenal. If you’re coming to Sniper Elite III looking for an exciting story, you will find absolutely nothing of the sort. Feeling more like the story of a handheld game rather than that of a $50 console release, Karl Fairburne’s tale plays like a slice of something larger. Its ending is largely inconsequential (ss the game’s defining moment is completely taken out of the player’s hands), and the cutscenes lack any sort of personality. Simply put, the narrative leaves the player wondering if their actions truly mattered at all.

Though the narrative is disappointingly weak, the low point of Sniper Elite III is the archaic mission structure. Playing more like a PlayStation 2 era military shooter than a game appearing on current-generation consoles, Fairburne’s objectives are as trope-heavy as it gets. Destroy three anti-aircraft guns. Place five satchel charges on building weak-points. Kill a “boss” vehicle by hitting its vulnerable spots three times. Escort a non-player character across an area using cover fire. It’s all so damn safe. Sniper Elite III almost feels like a journey throughout video game mission history, as no objective feels truly novel or fresh. If not for the sandbox-style stealth gameplay and some of the best sniping in recent gaming history, each level would feel like an absolute chore.

Thankfully, Sniper Elite III lives up to its title, as it is fantastic at being a sniper-based shooter. Adjusting bullet trajectory for gravity, wind, and obstacles is as rewarding as it gets. The long distance encounters feel far deeper than your standard “picked up a sniper rifle in any other shooter” gameplay, allowing the game to feel far more unique than its overarching structure would suggest. Being that Sniper Elite III is a stealth-based game, players looking to remain hidden have to mask their sniper shots with environmental sounds. Perfectly timing a shot to match the roar of a plane flying ahead feels unlike anything else in the gaming landscape, proving that gameplay still reigns king.

The closest comparison to the open stealth gameplay is Konami’s recent mini-epic Metal Gear Solid V: Ground Zeroes, being that players can tackle enemies in any manner they choose. Running around with a silent pistol can prove just as useful as taking enemies out from Northern Africa’s various mountain ridges. If you want to go in guns-blazing, go for it, just know that taking your time and being patient is always the wisest choice. Players can attack enemies from any angle, from any position, or simply let them be. It’s a brilliant take on stealth, as the structure allows you to play the game exactly how you want to play it. The game’s fairly complex radar system pinpoints your last revealed position, how far you need to move to conceal yourself, how open you are to foes, and everything in your immediate area. This gives players the power to snipe enemies methodically, relocating after each shot, making for some of the most enthralling and intense moments in the entire game. The downside is that, for a master of weaponry, your character often feels woefully under-powered. The submachine gun mechanics feel inaccurate and sluggish, and the pistols can sometimes take a life of their own (meaning that staying concealed can often prove difficult). Though your non-sniper tools sometimes make recovering from a revealing mistake difficult, the open-ended stealth structure is absolutely one of the highlights of the game.

Let’s not forget the signature feature of Sniper Elite III, those brutally disgusting killcams. Upon hitting an enemy in the head, a vital organ, or the genitalia (you read that correctly), an epic slow motion sequence begins. The camera shows our hero firing his rifle before following the bullets trail into a real-time x-ray image of his victim. Bones shatter, brain matter flies everywhere, blood spatters out of organs; these sequences are absolutely not safe for your children. At first, these incredibly detailed killcams are intensely awesome, as they are the perfect reward for pulling off a phenomenal shot. However, after watching about five of these scenes, they quickly become a nuisance. Because the mission structure is largely uninspired, players will find themselves wanting to get through each objective so they can move on. These killcams directly impede players progress, happening far too often and too slowly. Thankfully they can be skipped, but it begs the question: if they are simply a fleeting optional novelty, why include them at all?

While the mission structure is disappointing, Sniper Elite III‘s saving system is abysmal. Though it does give you the option to save at any point (which is a welcome feature in any modern game), its unpredictable auto-save points force this to be the main method of game saving. Players will often have no clue when their game is being saved, as the tiny spinning wheel indicator in the top left corner is often masked by the bright African sky. There are numerous cutscenes that seem like logical checkpoints, but players who die shortly after will often find themselves kicked back to the previous checkpoint. These auto-save points are so sparce that players should simply manually save after anything important happens, as they will never know when the game will assist them in this department. Having to choose between manually saving constantly or dealing with archaically structured checkpoints is a choice that players shouldn’t have to make, as it consistently breaks up the flow of the game.

In addition to its short six hour campaign, Sniper Elite III contains a horde-based Challenge mode and a multiplayer mode. Fighting off waves of enemies in Challenge mode is somewhere between bland and exciting. On one hand, players don’t have to deal with the campaign’s awful mission structure; however, one can’t play this mode without getting the feeling that it is simply shoveled in to add content. A wave-based survival mode is about as cliched as it gets in a shooter, and this one doesn’t do a great job of standing out from the massive pack. If one is actually able to get into a multiplayer match (the already sparse community and frequent match kicking makes this incredibly difficult), they’ll find a thoroughly uninspired offering. If you are not a fan of getting sniped in multiplayer matches, then prepare to rage: it’s all that happens. The lack of objective game modes and propensity for camping make Sniper Elite III‘s adversarial multiplayer as uninspired as it gets. Because of these two modes, one has to wonder whether or not the game would have been better off as a campaign-only experience (a la Wolfenstein: The New Order).

Though its stealth-based sniping gameplay can provide some exciting moments, Sniper Elite III is a decidedly mixed bag. Its abysmal narrative, outdated mission design, boring protagonist and weak non-campaign modes overshadow everything that it does well. Fans of technical long-distance gameplay will find themselves right at home here, however, as there are some truly great things about Sniper Elite III. This is the rare game where one should miss the forest for the trees, as the sum of its parts is greater than the whole. There is a lesson to be learned here: playing it safe hampers chances for success.