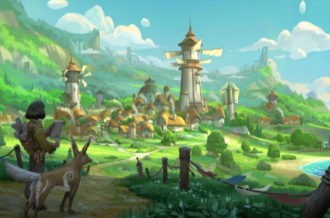 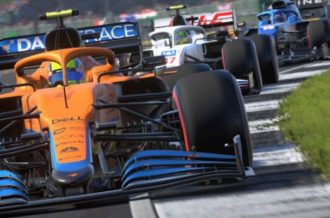 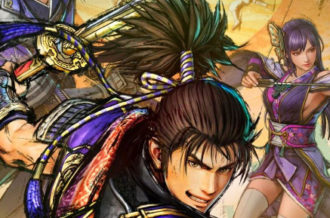 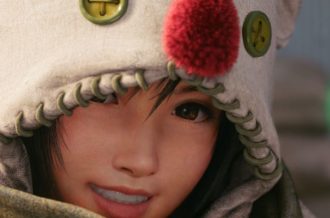 It’s all about speed, baby!  Gaining speed, maintaining speed, maximizing acceleration and keeping the momentum alive from the start of the track to the end is just how Action Henk rolls, and no insane jump or inconvenient slope is going to get between him and shaving a few hundredths of a second off his best time.  It’s a race against the clock through a 2.5D obstacle course, and the ticking seconds are a more merciless opponent than any human opponent.  Although their ghost runs are certainly nothing to take lightly.

Action Henk is a speed runner starring a a cheerful heavily-muscled toy who’s gone to seed with a truly epic beer gut.  He races through tracks made of wooden blocks and plastic lanes, usually with little more to aid him than a well-timed jump and the ability to slide down inclines.  All that extra weight he’s lugging about seems to have had a fantastic effect on his inertia, though, because once he gets moving he’s hard to stop.  Inclines knock off speed and walls can do unfortunate things to momentum, but even so that fat man can run. 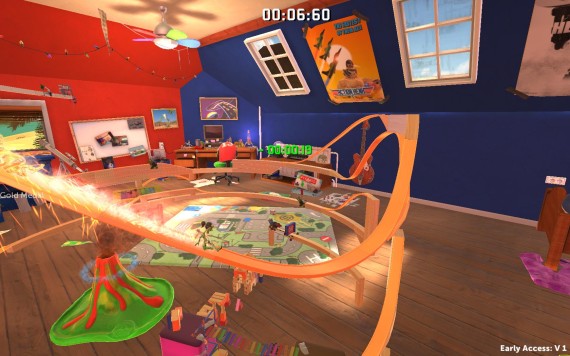 All that speed is nice, but interesting levels to work out momentum maximization is just as important.  In its current Early Access state Action Henk has eighteen levels to race on, ranging from the first tier of beginner levels that seems pretty well locked into place to a few work-in-progress levels that require both practice and knowledge of the more subtle game mechanics to complete, much less get a decent time on.  Figuring out the proper time to jump to get up a slope too steep to simply run up, or the secret technique to gaining extra momentum off a downward slide to gain enough speed to squeeze a few more inches out of an otherwise-impossible jump, will eventually be necessary.  Most of the levels in the current version, however, aren’t quite so demanding, but racing for the gold still requires a knowledge of the track and a good handle on the mechanics.

Take the level currently known as WIP_9, which is (as the initials might indicate) a work-in-progress level.  It doesn’t have its medal information yet but you can still compete against the ghost of the world’s fastest runner.  It starts off with a few tracks angled off a flat set of blocks, but by the time you get to them you’re running fast enough that you’ll overshoot, causing Henk to lose the speed boost from the slide that would have helped gain enough momentum so that a jump a few seconds later would take him to a faster alternate track.  The higher and lower tracks end up in the same spot after a very short run, but the lower one shoots straight up causing unnecessary air-time and a need to get back up to full running speed after landing.  When trying to lower a time by tenths of a second, those two full extra seconds cause nothing but pain and an instant reset.  Other levels need full use of momentum to minimize wall jumping, or land perfectly on a down-slope to slide to ridiculous speeds, Henk’s butt leaving a trail of fire behind. 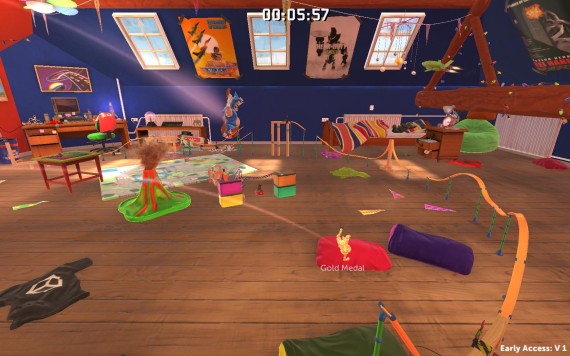 Most of the levels see Henk running, jumping, and sliding to victory, but three of them also have a grappling hook/suction cup dart gun for swinging over gaps, and of course proper usage means even more speed.  Maximizing the grappling hook means timing the arc just right while keeping an eye on the marker overhead to target the right spot on the ceiling.  A little practice and Henk can get serious speed out of the grapple, and I’m looking forward to seeing people better than I am post impossibly low times as they wring every bit of acceleration out of it.

If it isn’t obvious, I’ve been enjoying every second with the Action Henk pre-alpha, even when wondering how on earth some of the gold times are possible.  As of today it’s graduated to Early Access, and while there’s a lot to do on the road to completion, what’s available now is a ton of fun with plenty of room to perfect one’s technique.  Plans for future updates include taking the action out of the kid’s bedroom and onto the beach, adding new gadgets beyond the grappling hook, adding more outfits and unlockable playable toys to join Henk and his trainer Betsy, and hopefully even a level editor.  Early as it is, Action Henk is great fun and highly replayable, with controls that feel great even when blowing the timing by a few hundredths of a second on the hardest level (titled The Ultimate Test.  They’re not kidding.) means failure.  Action Henk is a butt-sliding, wall-jumping, speed-running blast, and I can’t wait to see what new tricks it has up its sleeve as development progresses.