There are a lot of roguelikes and roguelike-equivalents on the market, from games that take the genre in new directions such as Tower of Guns, Eldritch, or Nuclear Throne, to the more classically-styled games like Don’t Starve and Dungeon of the Endless. What these games all have in common, though, is procedural generation, the dreaded perma-death, and a challenge level that’s viciously unforgiving. However, they’re only tangentially similar to the game they’re all supposedly “like.” Delver, while played from a first-person viewpoint in real-time, boasts mechanics that are deeply rooted in roguelikes of old.

You begin at a peaceful spot atop the dungeon ruins, moon in the sky and an orange glow on the horizon as the sun sinks. The fire is burning, your companions are assembled about the camp, ready to trade a few items that’ll possibly make the next dungeon run a bit easier. At the outset, your stats are low across all attributes. You’re armed with a weak dagger, junk armor, an unidentified potion, a magic wand, and some sort of food. It’s everything an up and coming adventurer could hope for — that is, if they were going to kill rats in a basement instead of delve into a giant warren of monster-infested caves. 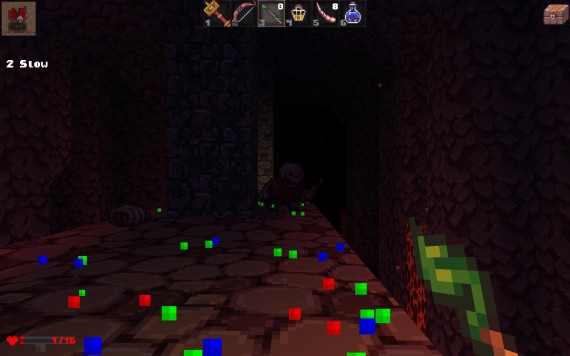 In its current early-access state, the dungeons of Delver are divided into four sections, two floors apiece. Each floor is randomly stitched together from a number of pre-built rooms, forming a labyrinth in which to meet your inevitable doom. The four biomes have their own monsters, too, ranging from other adventurers on the top floors, to skeletal warriors and wizards in the darkest depths. You’ll need to fight your way down, snag a relic, then make your way back to camp.

Of course, the more likely result is that you’ll be sniped by a beholder’s fireball, or lose a magic duel against an angry lich, but in theory survival is possible. You can help your chances by scavenging anything you can grab a hold of — food, armor and weapons are all plentiful and readily available, but in a classic roguelike fashion potion contents remain a mystery. Identification requires gulping them down, which may or may not result in some serious indigestion and loss of precious hit points.

Despite its current state, Delver is highly playable. Although most rough edges are sure to be smoothed over in future updates, they’re very-much apparent across every facet. Currently, armor is great at dealing with physical damage but useless against magic (with no helpful defenses or upgrades), and the only status ailment is poison. Most non-weapon/armor items are for straightforward healing, meaning that equipment doesn’t yet have any surprising unpleasantness attached. For now, choosing your stash comes down to comparing numbers. 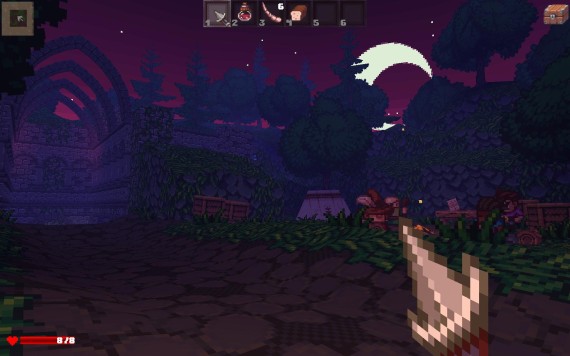 The system is simple, but it’s enjoyable. Updates have been rolling out every few months, adding flesh to Delver‘s bones, so it’s likely the game will only improve. Most importantly, perhaps, Delver feels “right,” with the world and its pixelated aesthetics evoking strong memories of Rogue. The combat, too, offers its share of strategy — melee, bows and magic are all viable options in any given encounter. Delver does the dungeon crawler justice, and even if it never finds that final coat of complexity, it’s a fun little quest that successfully works its roguelike charms.