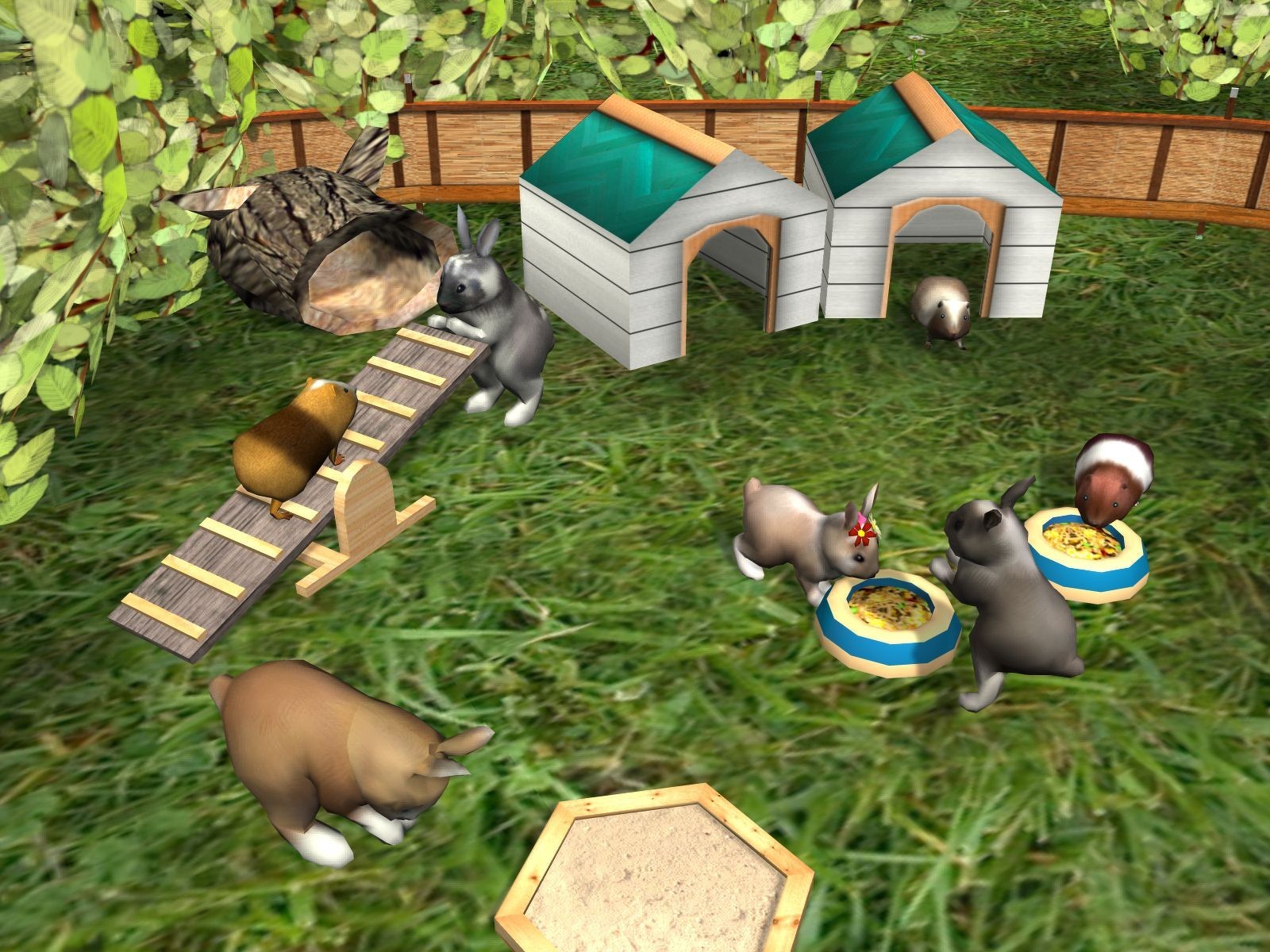 Me & My Pets 3D is fundamentally wrong on every conceivable level. For starters, it should be “My Pets & I 3D.” Unfortunately, basic grammar is just the first of many inaccuracies. Last I checked, I am not an emotionally dead eleven year old girl, so game does not accurately represent “me” – even if it lets me put a picture of my face on said girl’s slender, pink-clad shoulders. None of the pets in the game actually belong to the girl, either – rather, for some baffling reason, townsfolk leave them in her inexperienced hands when they go off on vacation. Lastly – and this is perhaps the most glaring deception in the entire title – the game is not in 3D. Like, at all. It uses 2D sprites of 3D models for a Donkey-Kong-Country-style pre-rendered look (baffling when you consider that the 3DS is clearly more powerful than their rendering farm). Aside from the ampersand, every last character in that title is a bald-faced lie.

You may be thinking it odd that “Hardcore” Gamer would review such an obviously casual game, but She & Their Pets 2D  — sorry, Me & My Pets 3D — is actually a grueling endurance test like no other. You’re dropped into the fray with no tutorial or guidance whatsoever, not unlike the intense crafting-based survival game Don’t Starve. This may seem like an odd design choice for an entirely menu-driven “simulation,” but Me & My Pets 3D knows how the real world is. It’s sink or sim out there. The secret to this devilishly challenging and obtuse introductory session is to screw around with the menus, then wait 20 minutes so that a rabbit hutch can be built on your land and you can actually start playing. If you don’t figure out how to build a hutch inside 20 minutes, you have to wait another 20 minutes for the next day to end. 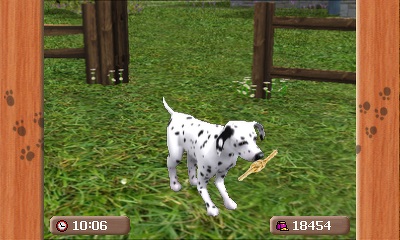 The only guidance you’re given is in the form of a task list, which gives helpful hints such as “use the online store,” “buy a toy for a dwarf rabbit” and “rabbits 0/1.” You might think from this list that you need to use the online store to procure a rabbit, and you’d be wrong. In a brilliant and intuitive system, you acquire rabbits by allowing random strangers to wander into your house and give them to you. They will only do this if you first buy a rabbit hutch (which is found on the “expansion” menu, not the online store), so if you spend your first day trying to figure out how to get a rabbit instead of expanding your land, then you’ve fallen into one of the game’s clever traps.  Me & My Pets cleverest trap is convincing you to play it in the first place.

Once you have a rabbit, you might think “Rabbits 0/1” would become “Rabbit 1/1,” but that’s silly. The rabbit’s owner must pick it up before you can check that item off the list. Or get paid, for that matter, because your eleven year old avatar is too stupid to charge up front. This will take another 3 in-game days, which equate to 45 real world minutes that you can never, ever get back. With 15 total missions to complete, each longer than the last, leading scientists estimate it could take upwards of 10 real world days to see everything Me & My Pets has to offer – a full 9 days longer than the game took to develop.

In the meantime, there are a number of ways you can interact with your delightful bunny guest. These include feeding it, grooming it, training it, and playing two games with it. The games in question are “beg” where you can tap the rabbit to trigger its eating animation without actually having to feed it, and “circuit,” where you tap the rabbit to make it run around in circles. In training, you can make your rabbit jump through a hoop once, then back out to the menu and re-initiate the minigame to make it jump through a hoop again. This game is not very well-designed.

When I learned that one of its primary methods of engagement is “watch a rabbit run around in circles,” I began to suspect that Me & My Pets might actually be a misplaced North Korean torture device. This hypothesis is further bolstered by the music, a mixture of mind-numbing synth noise and terrible, poppy “doo wap” nonsense singing that loops endlessly as your mind unravels. Coupled with later missions, which involve such thrilling activities as rubbing a bird for five straight minutes so that it learns to sing, this soundtrack becomes a psyche-destroying weapon of unparalleled potency. 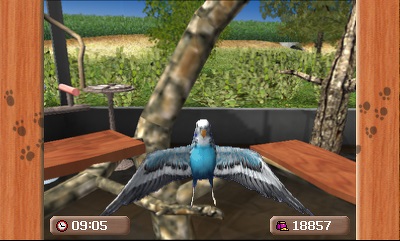 Some small concessions have been made for Me & My Pets 3D transition from torture device to entertainment product. You’re not dropped into the endless nightmare completely unprepared. The game contains a helpful pet care guide, with information on fish, rodents, budgies, cats, dogs, and even horses. Unfortunately, this guide doesn’t offer any advice on how to actually play the game. Instead, it gives detailed instructions on how to care for these pets in real life – a cruel reminder of one of the many better uses for your time and money.

When not writing pet care guides, the game’s writers still had their hands full. There are dozens of possible reasons for random strangers to foist their pets off on you, ranging from “it’s too hectic around the house with my brother’s upcoming wedding” to “I promised my daughter I’d take care of her budgie, but I really, really don’t want to.” Additionally, they spent many hours coming up with compelling, believable narrative hooks to drive the game forward, such as “a charitable organization gave a preteen girl an entire farm and 500 dollars a week to take care of pets.” And of course, they had to invent brilliant mission names like “Happy Fish,” “Rabbits – Floppy-Eared Munchers,” and “Budgerigars – Colorful Little Happy-Go-Luckies.”

These mission names are read out by a cheerful narrator, who clearly has a hard time saying them and keeping a straight face. This narrator contrasts nicely with the voice of the eleven year old protagonist, who delivers her lines in the deadest monotone you can possibly imagine. This soulless little girl really captures the full emotional spectrum of rubbing a brush against a fake rabbit for minutes on end with lines like “good pet,” “yes, good,” and a resigned “fine…” I will admit that hearing her squeaky, dead voice come out of my mouth thanks to the “take a photo” option made me laugh, and laugh hard, but it’s a small concession when every syllable she utters sends a soul-rending chill up your spine.

You can also hear the little satan spawn say “good horsey” by selecting “Go Riding” from the main menu, which takes the place of the expected “options” option. Horse riding makes use of a different awful soundtrack, thank god, with awful synth guitar riffs instead of terrifying, incomprehensible vocals. To go with this new soundtrack, you have an entirely new control scheme, which asks you to forgo use of the circlepad for a much more intuitive touch-screen-based analog stick. Even though it would serve the same purpose, the circlepad just isn’t an option here – however, you can press the x-button to use a gyroscopic control scheme, which is surprisingly responsive compared to the awful, awful touchpad. 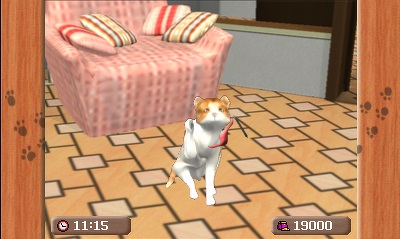 Whereas other games might test your endurance, mental fortitude, reflexes or wits, Me & My Pets 3D tests your will to live. If you need to extract information from captured enemy agents, or get revenge on a small, gullible child who has slighted you in some way, this is just the thing you’re looking for. If you want to have a good time with your 3DS, however, you’d be better off smashing it with a hammer.