Terrian Saga: KR-17 follows the epic adventure of a rogue military robot that was the 17th unit out of 100 similar KR units deployed. Things go wrong for the robot army as they soon get destroyed, leaving just KR-17 as the sole survivor. Something strange happens as the unit somehow develops a conscious of its own, consequently giving it the free will to act on its own accord. Joining him is his trusted friend and sidekick, a homing missile named J1M. With the two of them thinking on their own and no one to program orders, they set out to save their galaxy from invading forces. Terrian Saga: KR-17 comes from Wonderfling, and is a game which harkens back to the days of crisp 32 bit sprite-based action games on the PlayStation and Saturn.

Terrian Saga: KR-17 is an action platformer with strong emphasis on puzzles. It draws inspiration from a lot of games, but mostly from the Mega Man X series and even bits of Metroid. Unlike most indie games that pay homage to the trends and hits of yesteryear, however, Terrian Saga: KR-17 manages to step out of the shadow of its influences to become its own unique beast. It showcases the right kind of inspiration as it only loosely resembles its influences and ultimately marches to the beat of its own drum. From the mechanics to the level design, everything in Terrian Saga: KR-17 feels familiar and yet so very new. 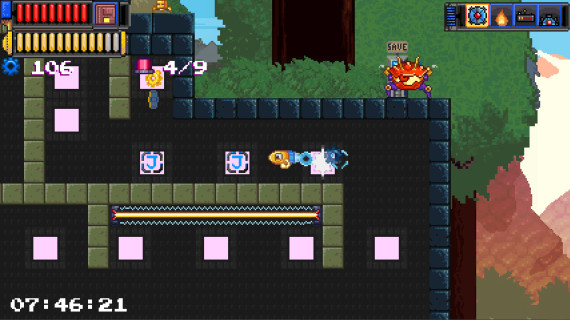 Mechanically, Terrian Saga: KR-17 leaves nothing to be desired as the controls are tight, responsive and intuitive. The physics are nailed without fault, in particular the weight and inertia of the jumping mechanic, something few 2D action games get right. The weapon variety isn’t vast but what’s offered feels practical and compelling given the design and structure. The controls become second nature within moments and complement gameplay well. The most crucial weapon is the guided homing missile, J1M, and he not only serves as a powerful piece of arsenal, but also plays a major role during puzzle solving and exploration. You can literally control the missile to reach areas that KR-17 can’t access.

The design of Terrian Saga: KR-17 is pretty special as it does not imitate anything you’ve experienced in Mega Man X or other similar games. It has that sense of familiarity since it’s easy to adapt to the many platforming situations and other gameplay challenges– and yet despite some common elements and trends– the level designs, themes, and gimmicks are almost never consistent. Just when you think you’re getting into a pattern the game throws a curve-ball at you, basically going from one unique situation to the next. The level variety simply never lets up and it’s a tough game because of that. While there is no Mega Man level of memorization involved, you will still have to take time to study the environment,  practice the sweat-inducing platforming sequences, and figure out the puzzles. The boss battles are satisfying, huge behemoths that generally involve chipping away at their life bar as per usual, but the more interesting variants are the bosses which are subsumed into the level itself. One of them reminded me of the Metal Sonic boss battle from Sonic CD, and was basically a very intense obstacle-ridden race. 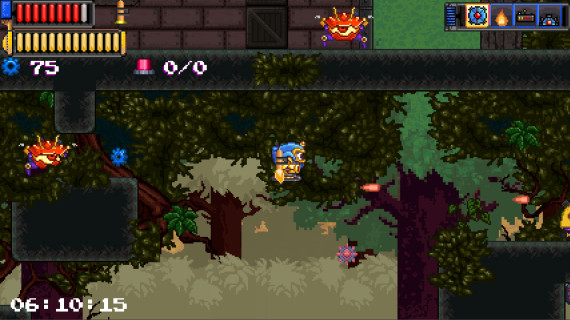 The visuals are crisp and solid, the main character sprite is just instantly likable and the whole game is just brimming with a lot of color and visual variety. The visuals most certainly do the 32 bit moniker justice. Just as good is the game’s immense soundtrack, which has that classic 90s feel to it and sounds akin to the music from Mega Man X games. It’s generally positive and upbeat, but with plenty of dramatic moments too.

While Terrian Saga: KR-17 does little inherently wrong, it unfortunately suffers from a few post-production bugs. These bugs aren’t apparent in the actual gameplay, but I had the unfortunate luck of having my save file completely wiped. Thankfully, the developers are well aware of this save file bug and are working to fix it at the time of writing this review. Still, as soon as I loaded up a brand new game I found my second venture to be just as fun as the first. That’s good sign and proves it has the appeal of encouraging multiple replays to improve game completion time à la Metroid. 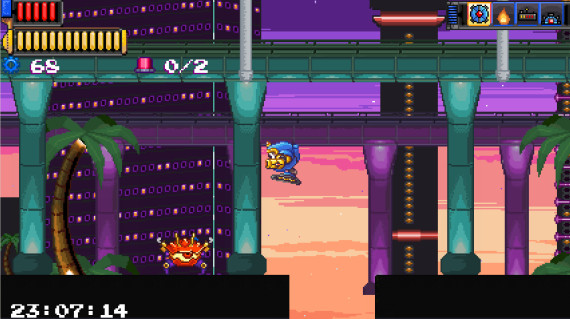 Terrian Saga: KR-17 is a loving tribute to glorious days of 32 bit sprite-based video games. The level design is organic and engaging, the gameplay is challenging and satisfying, the controls are ideal, and just the general look and demeanor of the title embodies diehard ’90s video game fandom. Despite some post-production bugs that the developers are working hard at fixing, Terrian Saga: KR-17 is an admirable achievement and fine action platformer that will keep you guessing and entertained.