It has been a somewhat rough couple of months for big budget games, with smaller independent titles make significant strides. That’s by no means a bad thing, but it has left us with very few monumental releases. Like its predecessor, From Software didn’t stop developing the massive world after the main campaign’s completion, and is expanding upon it with various pieces of downloadable content. The first of three to be released is Crown of the Sunken King, sending the player down into the depths of the earth to discover what has become of this lost kingdom.

Crown of the Sunken King is accessible after defeating The Rotten in the Black Gulch where a new, yet somewhat familiar structure has been placed. You are then transported far underground to witness a mysterious Aztec-esque temple and various types of knights and creatures guarding it. As per usual, there’s not much narrative to speak of. Most of the story is hidden within descriptions of items, but what has been sussed out is that a King, whose name has become lost, once ruled this ancient land of Shulva and built the Eternal Sanctum to worship a great dragon named Sinh. Unfortunately, things don’t go quite so well when the dragon awakes and the city crumbled beneath the flying beast’s claws. The lore itself is quite interesting and adds to the already fascinating world, but a little more context to why you’re traversing the new area and taking down the bosses could be a little clearer. 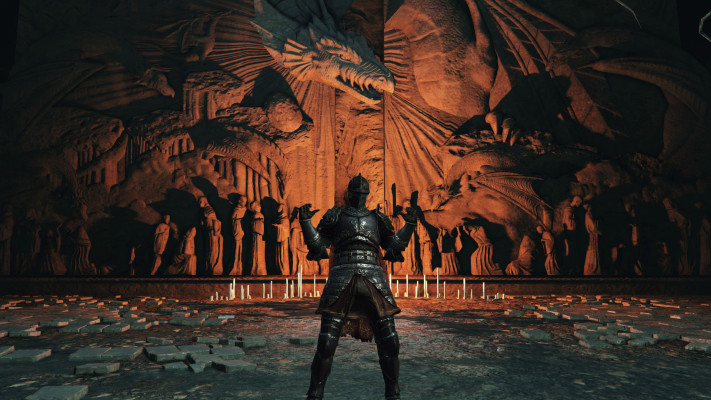 There are roughly three different areas to explore, each one interconnected with one another. One of the paths leads in an optional direction, coming across a burial site filled with nasty and dangerous creatures, but the rest are structurally linked together through well-constructed puzzles. What this piece of downloadable content shows off are activated mechanisms that move structures around the Eternal Sanctum. This involves building bridges, lifting platforms, creating shortcuts, and many other techniques. It’s a strong direction, especially considering most of the main campaign’s environments are pretty static, so hopefully this is something that will be used in future iterations.

One of the few issues that plagues Crown of the Sunken King is its bosses. They are by no means poorly designed, in fact they contain interesting strategies to defeat, but most of them seem to be ripped from the main campaign with slight alterations to their attack patterns. For example, one enemy resembles that of the final boss who wields a long weapon with a wide swing and various hex magic that can drain your health fast. The difference is that it can summon minions into battle, and even one of the most difficulty bosses in the game. Another boss fight takes figures from a covenant mission and has them agro from the get-go, making it a cat and mouse game that quickly devolves into striking once and running away. The final boss is by far the best of three, putting up a challenge and also adding elemental effects that differ greatly from any other opponent. Overall, it’s a mixed bag that has some strong elements, but it would have been nice to see enemies built from the ground up rather than using an existing base, especially coming off the creation of both Artorias and Manus. 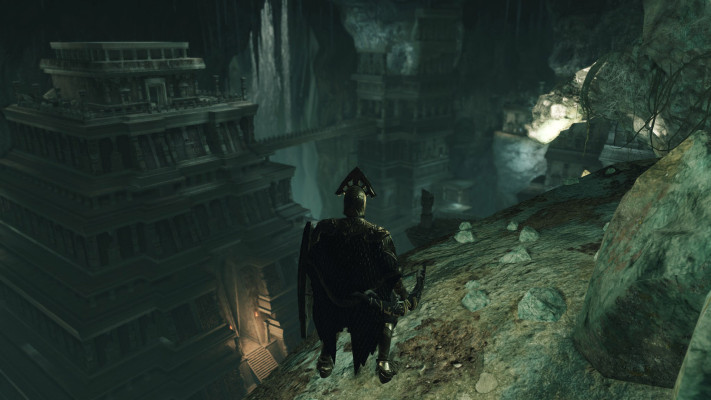 Fortunately, where bosses lack, standard enemies prevail. There are roughly seven different creature types to be found, with alterations to their weapon selection (mainly just adding a crossbow to some soldiers). Unfortunately, one of the more inventive creatures feels underutilized. They’re frightening gigantic fiends that are placed in a fairly empty area that’s simple to pass, quickly forgetting they even exist. Maybe adding more interaction on the bottom level of the structure could have made them foes to fear. There are also two different invaders, one of which will taunt you, and another who will throw Lloyd’s Talisman to prevent you from healing. They are some of the most creative ways in introducing invaders, actually giving the player some trouble if they’re not careful. In fact, enemies in general are just smarter than before.

In addition to five or so hours of playtime, there are various new spells and equipment scattered about. These aren’t just run-of-the-mill attribute adding items, but unique pieces that add to the overall experience. This includes a ring that can sometimes reflect magic, a spell that can add an extra couple of seconds after death, and arguably one of the best looking armor sets to be found. Even if you don’t enjoy the new areas, at least the new selection of goods should have you happy. 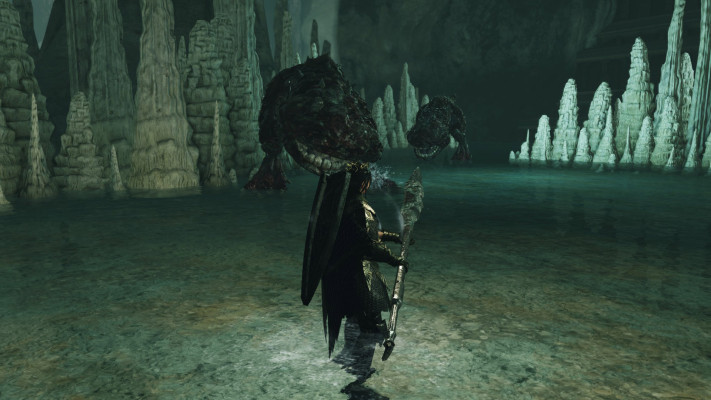 Don’t expect Dark Souls II: Crown of the Sunken King to match up to Artorias of the Abyss, but it still offers a surprisingly deep and gratifying experience. While the boss selection is somewhat disappointing and context to why we’re in the ancient land of Shulva seems to be missing, the inhabitants and hidden story behind Sinh and Yorgh will keep fans occupied until the rest of the Lost Crowns Trilogy is released.