Well-endowed cat girls. Sex jokes. Faceful’s of women’s underwear. Bad grammar. Truly, Sakura Spirit has a little bit of everything. Clearly this visual novel wants to pander to a very certain audience, but unfortunately, can’t quite ever figure out whom. This bite-sized read-a-thon will be liked by some, but it’s hard to imagine any self-respecting gamer giving this title the time of day. Sakura Spirit is a visual novel that tells the story of Gushiken Takahiro — a rising, high-school judo star set to compete in the biggest tournament of his life. In this make-or-break competition, scheduled for just two weeks ago, the winner will earn a spot on the most coveted judo team in Japan. Clearly, with much riding on his performance, our young protagonist is nervous about his potential future prospects. As such, he seeks out a temple, located deep in the woods close to his school, that is said to bring good fortunate to those whom pray to its alter. Thus, one day after class he pays a visit to the superstitious shrine. Unfortunately, just as he arrives, he hears a mysterious voice speak to him from a disclosed location. Just moments after this, Takahiro loses consciousness.

Our fair hero suddenly wakes up in the forest he walked through to get to the temple. However, things don’t seem exactly as he remembered them; the forest seems different — older, less traveled. But as he tries to put his finger on just what else is different about the area, he hears a loud commotion rapidly approaching where he lay; a quartet of female voices yelling. His curiosity gets the best of him and lands him in the middle of what appears to be four women, two cat-girls, two human gals; the cat-girls apparently fleeing the humans, being called thieves. Somehow Takahiro ends up between the opposing groups, catches a pair of girls panties on his face (the item that was stolen — from off one of the human girls, no less), and, as the cat-ladies get away, gets arrested as an accomplice. Yep, ladies and gentlemen, that’s the opening and premise of Sakura Spirit. Talk about an award-winning narrative.

In truth, though, this game isn’t going for anything more than what it is. It’s not trying to be in-depth, thought-provoking, or much of anything more than fluff and fan-service. But even in that extremely limiting niche arena, somehow Sakura Spirit fails to captivate. For starters, its characters have the emotional depth of a sidewalk puddle. Outside of the core motivation that we’re given for Takahiro, we never get to know much more about him, other than his typical adolescent tendencies. The supporting cast are like caricatures rather than characters, lacking any kind of merit or depth. Their personalities struggle to come through at times due to the poor writing, which doesn’t help Sakura‘s cause. Even barring that, though, it’s hard to get invested in Spirit‘s zany story simply because it seems devoid of anything other than cheap pops and juvenile tongue-in-cheek humor. While that kind of thing can work, it usually only does so when doled out with sharp prose and a certain degree of restraint — not ever trying to reveal its one-tricky pony nature too often. Here, though, the blatant use of only these tropes is unabashed and shameful at times due to the superficial level of core storytelling.

Alright, so we’ve established the low-rent humor and story, we haven’t address the biggest culprit; the writing itself. Now, this is an indie project, so some leeway will be granted. However, the amount of typos, downright missing punctuation, or awkwardly worded dialogue is unacceptable. Worse is the fact that this isn’t a localized game. The developers, Winged Cloud, are not Japanese, despite the desire to be a Japanese-inspired visual novel. We mention this because the game does, in fact, read as if it has been translated — by folks who don’t have a profound grasp on the English language. We found this to be an off-putting part of the experience, especially because the entire game is made up of reading. When the core, and really the only, aspect of your game isn’t delivered coherently, there’s a big issue. Now, as we were about to type up our initial review we did receive an e-mail from the devs mentioning that a patch has been released to address this issue. So, in good conscience, we went back to the story to see what had changed. Fortunately, some of the grammatical snafus were addressed in the update, which definitely makes the whole thing a bit more fluid. It still doesn’t negate the errors and poor wording outright, but at least the effort counts for something.

Sakura Spirit is somewhat redeemed by its presentation. For all intents and purposes, the game looks the part of a visual novel, and at times is really quite stunning thanks to some vibrant and wonderfully drawn art. The interface is even well-crafted, with its expert use of lush colors to make the UI pop but not to the extent of being distracting or gawdy. Its character designs, however, are what will have people talking. The human characters are what they are; nothing too out of the ordinary. Our cat ladies, however, are…what’s the term…breast-y. Yeah, that works. They’re quite breast-y. Actually, all the female characters, which is just about the entire cast, are well-endowed. In this alone, it’s clear what Winged Cloud is going for: nothing more than the typical allure of most visual novels. Since VNs often times will contain adult content, it would only be fair that Spirit introduce a bit of its own. While the game never goes down the route of being hentai, boob-overload is nevertheless very real here. 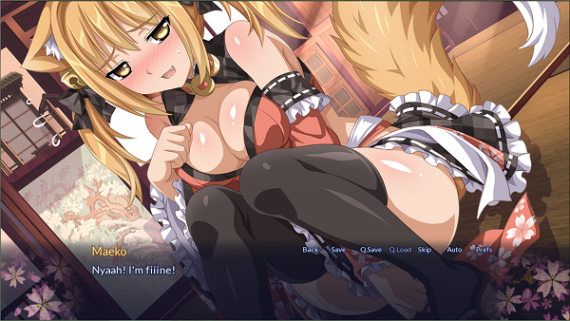 To this end, it all coincides with the rest of the game’s over-the-top antics. So in a way, it fits and can be strangely charming. By and large, however, the fan-service-heavy aesthetics do make the whole thing feel a tad low-brow. No doubt, there will be an audience for this. But it’s hard to stomach fan-service merely for the sake of fan-service. In fact, we’re not the kind to be down on such practices typically; but in the case of Sakura Spirit, it all feels contrived. The musical arrangement to the game is not going to set the world ablaze either, but at least it won’t be as divisive. It’s adequate for what it sets out to do, but that’s about it. It serves its purpose in setting the tone with ballads that convey a certain emotional depth, but never to the point of being particularly memorable.

Sadly, the game is also offensively short. We’re talking four hours at most (and that’s if you play both paths and a leisurely pace; just playing through one will net folks half that). There is some incentive to replay due to the branching path, but that will be entirely dependent on how much a player wants to subject themselves to inane sexual suggestion. Not to mention, only being given one choice throughout the entire experience is a bit of a letdown. Had the game been explicitly billed as a kinetic novel, it would have been forgivable; but alas, it is not. Still, for $10 one would expect Sakura to be at least twice as long; instead, with its 4-hour runtime, half its current price seems like a far more acceptable monetary entry.

The problem with Sakura Spirit is not necessarily that it’s a niche of a niche. Sure, that limits its audience and as a result effectively shuts its door in the face of those who want a solid visual novel experience, but even for diehard fans, there just isn’t a lot to like here. It lacks narrative depth and compelling characters, and while its humor will be good for a few laughs, comedy without any type of golden thread to tie it all together ultimately comes off as a disjointed project that plays more like a series of jokes than a coherent piece of storytelling. Its reliance on overused tropes can be eye-rolling for those familiar with the genre and its nice presentation can only make up for so much. Simply put, there are better visual novels out there.