When games jump from platform to platform, changes are inevitable. Be they small differences in frame rates or fundamental changes in mechanics and features, these variations can drastically change the feel of a game. With Version Control we seek to catalog these differences, stack them up against each other, and determine which system, if any, hosts a game’s definitive port.

When you’re a kid without a whole lot of money, one of the hardest things in the world is convincing your parents to double down on a new console. This was especially difficult in the ’90s, when the internet was barely budding, and video games had nowhere near their current pop culture clout. Trying to convince my parents why the SEGA Saturn was worth the price of admission was tough, especially when we already had a Genesis in the house. SEGA made the distinction even more difficult by supporting the Genesis years after the Saturn’s release — and converting it into a competing 32-Bit console with the 32X. Occasionally the Saturn got enhanced editions of Genesis titles, but a more peculiar occurrence was when the Genesis received watered down renditions of popular Saturn games. It didn’t happen often, but one particularly bittersweet example is Virtua Fighter 2.

The Saturn had its fair share of moments in the sun, and Virtua Fighter 2 was one of the brightest. VF2′s saturn was a technical marvel, one of the most eye-popping graphical showpieces of its era. The game had super crisp visuals running at an ultra smooth and silky 60 frames per second, which is rare even today. The gameplay was so deep and refined that it still shines by today’s fighting game standards. Not to mention, the Saturn controller is still arguably best tool for fighting games. It’s a timeless classic in nearly every sense of the term, close to perfect where it counts, and as playable today as it was three generations ago.

In an odd turn of events the Genesis ended up getting a version of Virtua Fighter 2 nearly a year after it hit the Saturn. Being forced to settle for it felt bittersweet at the time, given that it was (understandably) devoid of all the flashy 3D that made the Saturn classic so special. VF2 for the Genesis was the furthest from next-gen you could get, with all the music and visuals built from the ground up to fit into a 16 bit cartridge. Honestly, part of me died a little inside when I first tried that version of the game, especially with the sprite graphics, which struck me as ugly at the time. 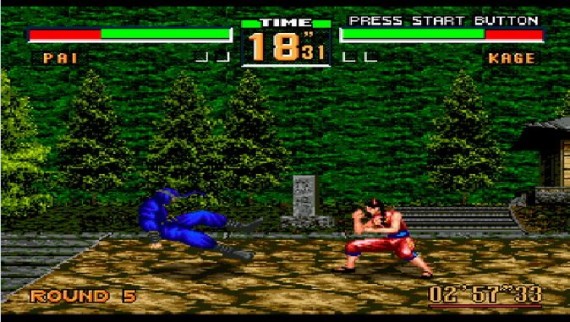 Playing it again today, however, the visuals are actually quite respectable for a Genesis title. There’s plenty of detail, a whole splash of colors, and the smooth animations are certainly admirable for a Genesis game. The staple Virtua Fighter gameplay is somewhat intact — albeit highly simplified and streamlined — with the core foundation still functional. The combo system feels smooth enough, but in the end it’s a tiny sample of the true Virtua Fighter experience. It’s interesting to hear 16 bit chip-tune renditions of Virtua Fighter 2’s iconic soundtrack, but most tracks sound like R2-D2 being strangled.

It wasn’t long after the Genesis downgrade that VF2 saw a SEGA PC release, and that was the first time I could really enjoy the game at home. Although it just wasn’t the same as playing it on the Saturn, the PC version of the game delivered shockingly well, and it kept my ten year old self entertained for hours on end. The game comes pretty close to the Saturn release as far as port quality and features go. While this version has long been out of print, you can still find the last run of copies released under the “Xplosive” label floating around on Ebay.

Fortunately, SEGA has made Virtua Fighter 2 accessible to modern gamers in the form of a downloadable release on XBLA and PSN. This is a straight port of the original arcade game optimized for HD resolutions with added network compatibility. The online mode was great while it lasted — I got several hundred matches out of it before the fickle online gaming community got bored and moved on. Outside of that, there isn’t much else to it. That said, it looks and plays great, and for its cheap price you can’t go wrong.

You can skip the Genesis version of Virtua Fighter 2. Sure it looks nice for a Genesis title, but it’s hard to get the same kind of enjoyment out of what amounts to a demake. The recent downloadable release is cheap and offers very crisp HD port of the arcade classic, but the online mode no longer has any support, and it lacks any single player value.  VF2 for the Saturn, on the other hand, is still the single greatest fighting game on a system built for fighting games, and it comes with extra modes, features, and secrets that you can’t find in any other console release of the game.  Experiencing the game firsthand on the Saturn– and seeing the hardware pull it off without a hitch — still manages to impress, even after all these years.