To quote J.D. Salinger, “I have so much I want to tell you, and nowhere to begin.”

That’s how I felt when writing this preview. Disgaea 4: A Promise Revisited, forged by the sorcerers at Nippon Ichi Software, is a sopping time-sponge, easily capable of absorbing the better part of a college course in finding better analogies. And while I love the game, my relationship with it is no doubt an abusive one. On the one hand, all the creative cogs are oiled and spinning, delivering both new and classic content to the Vita port of fan-favorite, Disgaea 4: A Promise Unforgotten. In only a handful of hours, it climbed its way onto my desert island items list — along with my Vita, couch, snacks, house, car and yacht (in case I get bored of the island).

On the other hand, though, it’s a time-consuming nightmare — both to play and write about. There’s so much filler that, fun as it may be to cavort about your vampiric endeavors, it can quickly give rise to languorous play sessions — especially for those who’ve previously enjoyed A Promise Unforgotten. While it’s on-the-go nature rectifies a majority of the issues inherited from its forebear, the ability to enjoy new content without playing through the entire game again would have been greatly appreciated. In any case, it’s hardly a chore to clock another bop on the dance-card, if only to see its vibrant absurdity on the Vita’s gorgeous display. 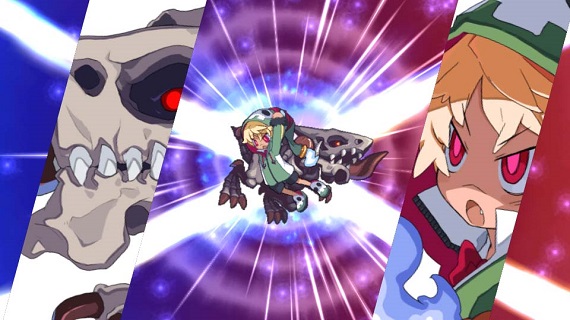 That said, Disgaea 4: A Promise Revisited is, without a semblance of doubt, the meatiest, tastiest, [insert additional food related descriptive word] entry in the series. And diehard Disgaea fans, particularly those who embrace the portable monster, can probably skip this preview entirely. It’s those outside of the proverbial loop that I encourage to brush through these paragraphs with a fine tooth comb. Disgaea is hardly formulaic, and even by Japanese standards it’s pretty damn weird, so any hesitation is understandable. It’s not a conventional strategy game, but it never tries to be. With over-the-top battle animations, bratty demons, a dose of misguided hatred, extra-cheesy comedy and sardines by the barrel, Disgaea 4: A Promise Revisited makes for a confusingly brilliant – and totally memorable – romp through the Netherworld.

Despite its quirky first impressions, there’s a deep-as-Krubera SRPG at its core, with an absurdly elaborate customization suite and grid-based combat system that’s both simple and impossible to grasp. The middle school slow-dance awkwardness, silly plot twists and fleet of dysfunctional (but mostly lovable) characters serve only as a reminder that beneath its layers of uncompromising complexity, A Promise Revisited doesn’t take itself too seriously. And that, paired with its unparalleled level cap, makes for a roleplaying game like no other.

In terms of value, the Disgaea series has set the bar so high it’s practically serving Jack and Cokes to cowboys in Purgatory. I’ve easily invested a work-weeks worth of time in the item world alone, chipping away at goals only a fool would deem anything short of outrageous. And yet, I thirst for another round. As soon as I slide that tiny cartridge into my Vita, the noose of addiction tightens. I’m voluntarily expending precious minutes, hours and days in exchange for a sliver of smug self-satisfaction. And the liberation of Prinnies, I suppose. 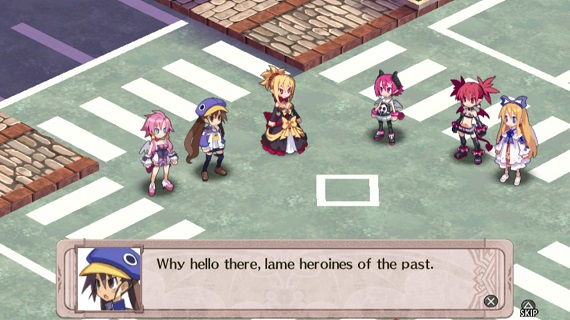 It’s a lot like a chocolate pudding cup of which every spoonful is tastier but also substantially harder to digest. That scaling difficulty couples beautifully with waiting rooms, public transportation and lengthy bouts of pesky procrastination. Your success in any given battle is entirely determined on your preparation and strategy, and with video gaming’s most outrageous battlefield tactics, there’s no experience equal in grind-worthy content. It’s rife with extracurricular activities to tackle long after the story fades from memory, and there’s always the multiplayer with which you can customize a pirate ship and battle rival players.

It’s not often that I’m fooled by nostalgia’s colorful lens. There are very few “remastered” games decorating my shelves, and I’m proud of that sensible frugality. Disgaea 4: A Promise Revisited isn’t an ordinary port, though. There’s enough newness to justify owning both the PlayStation 3 and Vita copies, and newcomers will appreciate the all-inclusive trip through the Netherworld. For the first time in series history, the visuals are on-par with – or better than – the console version, and every feature glimmers with a thick coat of polish. It’s a package that simply makes sense as a portable experience, and one you’d be crazy to miss – whether or not you’re a return customer.

For more on Disgaea 4: A Promise Revisited, check back soon for our full review.