This week, we’ve been bringing you a lot of theories about the future of gaming with Access plans. It all started with EA, then we talked about what Sony’s rejection of the plan could mean before moving over into Ubisoft and Capcom before talking about how Activision‘s version of a plan could work out if it focused on Call of Duty. However, one comment in the Ubisoft piece really spoke to us. Long-time commenter RandomDev was worried about these plans as an indie developer. It’s an issue that hasn’t been brought up before and made us think. Indie-friendly consoles have used a monthly access plan before, and one current platform is making use of them now.

The OnLive was years ahead of its time with itsPlayPack Bundle idea. For $10 a month, you could get unlimited access to a wide variety of games — not everything on the marketplace, but about 70% of it and a very valid comparison to the . While none of them were recent AAA titles, if you had some B-level things you always wanted to try out, you could check them out here for less than the cost of a low-risk used purchase or rental and see if you enjoyed the games. OnLive also had indie games on it, with World of Goo, Doc Clock, Trine, and Braid coming to mind instantly. It was a controversial payment setup at the time since no one else had anything like it, but I personally enjoyed it for a little while — much like the microconsole itself as the screenshot below indicates with two years passing since I’d even played something on the service. While the iffy nature of OnLive’s video quality made skillful play difficult, this business model would prove to be far more influential after the fact than it was at the time — much like the domination of “the cloud” in gaming this generation. 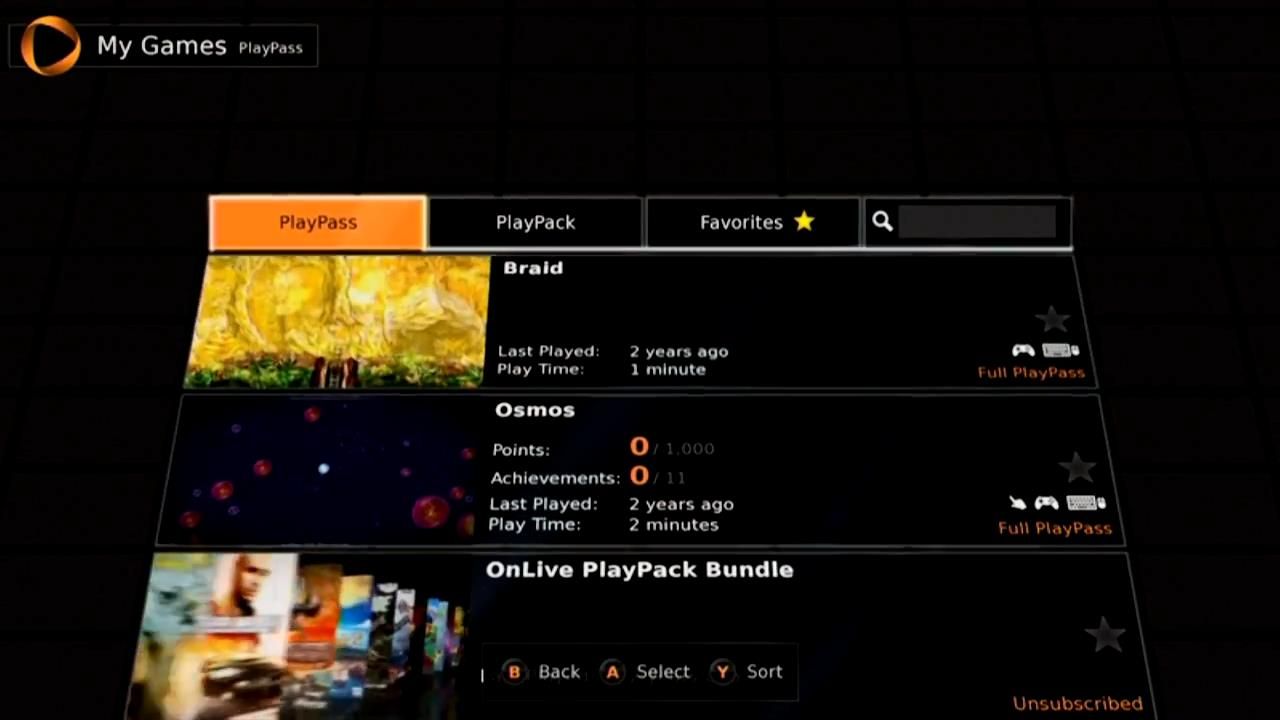 In late June, OUYA launched its own All Access subscription service. Instead of paying $10 a month, you could pay $60 for an entire year of access to every new release on the service — even if you were using OUYA Everywhere on your MOJO. This deal went over so well that every code allotted for it at that price point sold out in one day. This was a clear sign that indie gaming fans are willing to forgo permanent access to something in exchange for a far less expensive, but more temporary option to play the game legally. OUYA is also compensating every developer on the system with this plan, so it benefits developers as well as players. Since many OUYA games are also on Steam or are otherwise available on the Amazon Appstore or Google Play store, the All Access plan could act as a makeshift rental service for those particular games. You can see how good a game is in general, and then if it goes on sale on Steam, or you just really love it, you can get it on another platform. Developers could also decide to do their own cross-buy setup, like Double Fine did with Broken Age. There, Kickstarter backers who bought the game there got PC access and as a nice surprise, an unlock code for the OUYA version as well.

With microconsoles gaining more of a presence in the industry, it wouldn’t be surprising to see them all adopt this kind of business model. Amazon’s FireTV would be a perfect candidate for such a plan since Amazon’s already got Prime, Prime Music to compete with Spotify and the like, and Prime Gaming rolls off the tongue and could give people access to every FireTV-capable game. Amazon loves annual subscription plans, and they’ve become quite the money-maker for them. As we stated in other writeups this week, these plans give companies a steady stream of dependable income, and the cost per-day for them is so low that it’s very easy to justify them. The biggest issue people face with them, beyond the loss of ownership rights, is that it’s easy to find yourself paying for more of these services than you can realistically use. Having a single $100/year plan or $15/month plan isn’t bad, but when you’ve got every single one of them available, you’ll quickly find out that they’re bank account vampires when you’re not even thinking about them.

There are a lot of valid concerns about All Access-style plans for gaming and other services. You save money in the short-term, but lose any sense of ownership. All you’re basically doing is renting everything from a company for a predetermined timeframe. Depending on the service, like Netflix, it could be a month-to-month deal, or it could be a six-month commitment like the WWE Network. Consoles have played a large part in these kinds of service gaining popularity, with Netflix streaming taking off once it hit the Xbox 360, consoles being the best way to stream the WWE Network to a home theater, and now we’re seeing that same kind of business model hit mainstream gaming after years on the outskirts of the industry. The future of gaming could very well lie in these kinds of plans, and their appeal is going to vary person-to-person.

If you absolutely, positively must own everything in a physical format, then they’re not for you. They’re perfect for folks who view entertainment as disposable, though. If you just watch a movie once and don’t mind the lack of commentary, then going with a Netflix subscription over a Blu-ray purchase makes sense. When it comes to gaming, the OUYA model of giving you everything for a year at a cut-rate price is smart because for that $60, you’ll gain access to far more than $60 worth of content and then be able to decide later if it’s worth paying after your plan is up. The downside to these services is that you own nothing, and if there’s a sale on content you’ve already got free, you might be out of luck. Sony’s PlayStation Plus setup is hurt by not being able to save money by buying something permanently at a reduced rate if you’ve already obtained it as a freebie. However, for the fairly small price paid for PS+, it’s generally viewed as a minor inconvenience and not a deal-breaker. The same issue will likely affect the OUYA All Access plan as well, since it unlocks everything on the storefront for a year, and that would theoretically prevent you from obtaining permanent access at a discounted price. These caveats could, however, could add up over the long haul, and are something you’ll want to consider before committing to any gaming subscription-style plans.